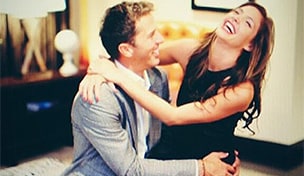 Professional golfer and Big Break Atlantis alumnus Allison Micheletti married retired NHL star Mike Modano on Sunday in Dallas. Micheletti, 24, was born one year before Modano, 43, was drafted into the NHL. The happy couple is honeymooning on the Caribbean island of St. Bart’s.

Micheletti, whose father is former NHL player and current analyst for the New York Rangers Joe Micheletti, made it to the sixth episode of Big Break Atlantis in 2012.

Modano is one of the greatest American-born hockey players of all time, setting U.S. NHL marks with 561 goals and 1,374 points in 21 years with Minnesota, Dallas and Detroit. He was the first overall draft pick in 1988 and won a Stanley Cup with the Stars in 1999.

This is Modano's second marriage. He was previously married to actress/singer Willa Ford for five years before they divorced last year.

The newlyweds will be featured on an upcoming episode of Golf Channel's Big Break Celebrity Challenge on Monday, Sep 9.

"...Once in awhile, Right in the middle of an ordinary life, Love gives us a fairy tale..." ~ @9modano pic.twitter.com/KVfdx3ipjr