Remembering when Fallon beat Tiger at golf ... sort of 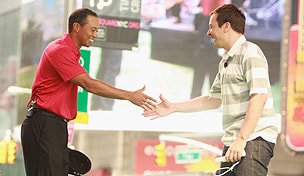 Getty Images
SHEBOYGAN, WI - AUGUST 14: David Lingmerth of Sweden watches his tee shot on the second hole during the second round of the 2015 PGA Championship at Whistling Straits on August 14, 2015 in Sheboygan, Wisconsin. (Photo by Tom Pennington/Getty Images)  -

Jimmy Fallon makes his debut Monday night as the new host of "The Tonight Show." He's following in the footsteps of great late-night comedians and pop culture icons in Jay Leno, Johnny Carson and Steve Allen. His role as "The Tonight Show" host will be the most prestigious and most highly scrutinized role in late-night television. But something tells me, Fallon can handle the pressure.

Why do I say that, you ask? Because Fallon has stared stardom in the face before and never flinched. Persevered, in fact.

I am referring to the time in 2009 when Fallon went head-to-head with Tiger Woods in a three-hole golf match and beat the world's top-ranked player. In fact, Fallon was beating Woods so bad, Woods conceded the match after just two holes. OK, so it was played on Nintendo Wii's Tiger Woods PGA Tour '10 game and not on the golf course, but a win is a win.

"I just got absolutely schooled in my own game," Woods said after the showdown at Times Square.

As Fallon embarks on this new chapter in his career, the Grill Room wishes him luck and hopes you enjoy revisiting the time he beat Tiger at golf ... sort of.