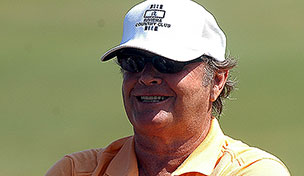 Getty Images
Bill Murray with a hat he borrowed from a spectator during the first round of the AT&T Pebble Beach National Pro-Am on Spyglass Hill Golf Course in Pebble Beach, California on February 10, 2006.Photo by Marc Feldman/WireImage.com  -

Jack Nicholson, who's been a little reckless with his golf clubs in the past, might want to think twice about his behavior on and off the course with his new set.

The Academy Award-winning actor reportedly plunked down a whopping $75,000 for a bag’s worth of clubs (14 in all — woods, irons and more). Made by the 54-year-old Japanese company Honma, the clubs are manufactured by more than 100 craftsmen and are made out of platinum and 24-karat gold.

Other A-listers who've reportedly shelled out for the clubs include Donald Trump, Marc Anthony and Danny Devito.

While this may not be the most financially responsible way to spend $75,000, we can think of worse ways that have been in the news recently (looking at you, Roy Hibbert).