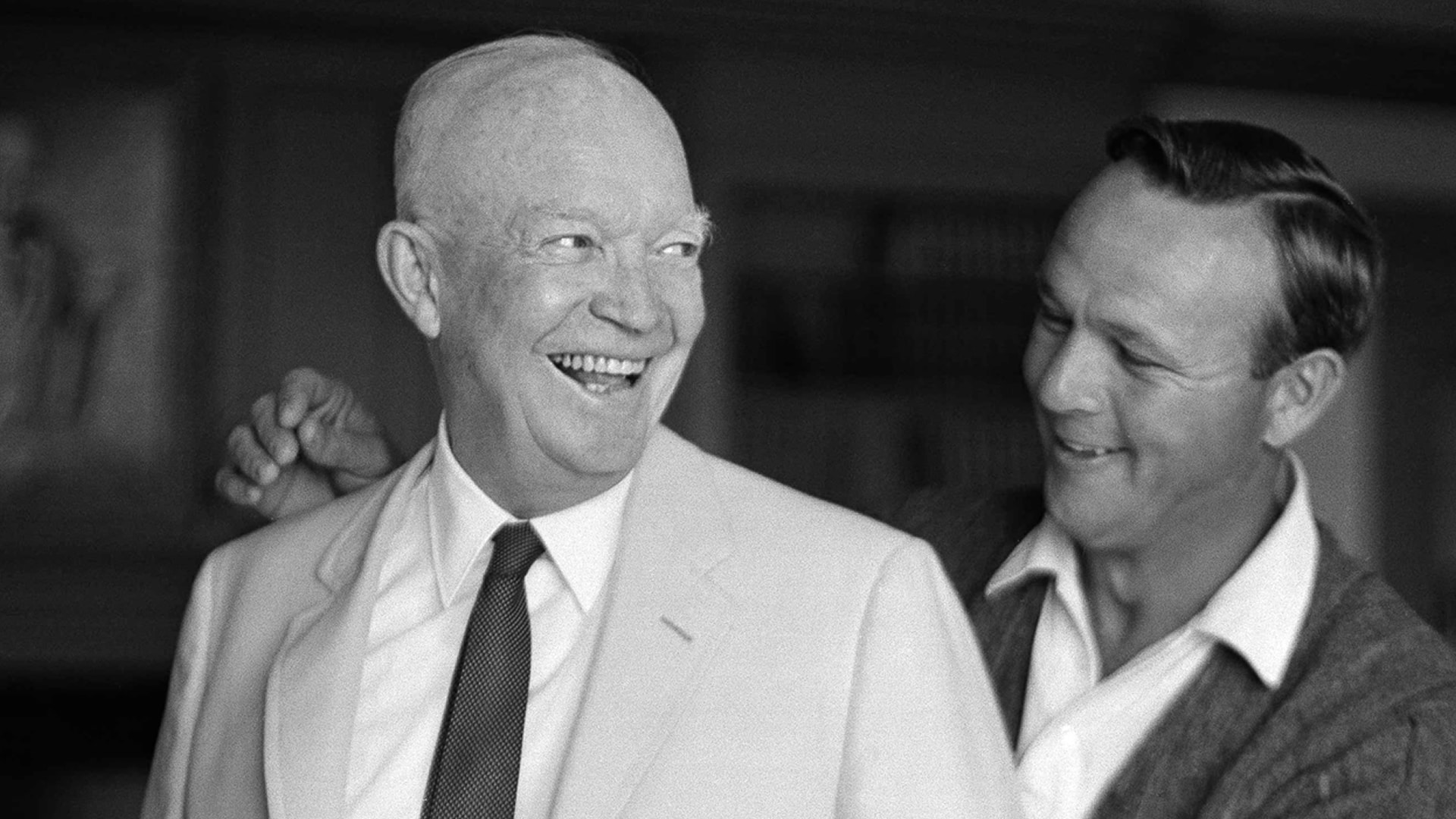 Since the dawn of politicians in the United States, there has been a constant battle among them over every decision imaginable for the greater good of the country.

One thing they can (almost) all agree on, however, is Arnold Palmer. When Palmer became the sixth athlete, and only the second golfer, to be awarded the Congressional Gold Medal in 2012 for “recognition of his service to the country in promoting excellence and good sportsmanship,” the bill passed 422–1 in the House and unanimously in the Senate.

“I’m particularly proud of anything the House and the Senate agree on,” Palmer joked at the time. But it’s no laughing matter: Palmer is a unifying figure, and one thing the men in charge of running this nation have agreed on the last 60 years or so - they all want to be friends with Arnie.

It started in 1958. Palmer, then 28, had just won his first major, a one-stroke victory at the Masters, when he got a message that President Dwight D. Eisenhower would like to play golf the next day at Augusta if he could “spare the time.”

“We played and we became friends. He was president of the United States then and we started hanging out together and I’d meet him for golf and we played some exhibitions for the Heart Fund because he was a heart patient and that was part our business,” Palmer said.

Winnie Palmer even surprised her husband by sending his plane to transport Eisenhower from Gettysburg to Latrobe for Arnie’s 37th birthday celebration.

Arnold Palmer and his relationship with presidents

"Quite frankly, I don’t know when I’ve had a better time," Palmer told Kingdom magazine of the experience. “We had a ball. He was just so accommodating and what a wonderful man he was. We talked for hours, just sat at a table and talked and it was a lifelong friendship from then on.”

Since that first encounter with Eisenhower, Palmer’s circle of golf buddies has grown into something that sounds like it came out of a fourth-grade history textbook: Richard Nixon, Gerald Ford, Ronald Reagan, both George Bushes, Bill Clinton, Barack Obama. Even John F. Kennedy, who was notoriously hesitant about being seen and photographed on a golf course for political reasons, made a tape of his golf swing in 1963 and intended to invite Palmer to the White House to critique it. First, however, Kennedy had a scheduled trip to Dallas.

An outspoken conservative Republican heavily influenced by his friendship with Eisenhower, Palmer's time spent on the course with Nixon, Ford, Reagan and both Bushes seems to make perfect sense. But Palmer’s presidential playing partners made it sound like the conversation never even included politics.

“Palmer likes to identify with good golfers and I’m sure that’s why he is my friend,” George H.W. Bush deadpanned. “He’s abided by the ‘no laughing' rule, which is a very serious rule that I invoke on everybody that plays with me, and he’s been very good about that. For example the whiffed pitching wedge, he doesn’t ever laugh about that.

“Some of these big-shots are so contemptuous of lousy golfers that they make it no fun in some of those pro-am things, but he relaxes you, no matter how bad you are, no matter how good you are. And that’s not an insignificant attribute.”

Perhaps Palmer's most perplexing presidential golf buddy, at least on paper, is Clinton. In the book “Arnie: Inside the Legend,” Palmer is quoted as saying, “If Clinton wins (this election), I won’t have anything left to will (to my daughters).” And while his political views may be the same today, you wouldn’t know it the way he and Clinton pal around the course.

“I’ve played with him and been honored by him numerous times and he’s a good guy, he’s a great guy, very intelligent and not a bad golfer,” said Palmer. “He can hit it a long way, he just doesn’t have a zip code.”

And it’s not just presidents. Arnie’s Army includes celebrities, too.  It’s no coincidence that Palmer, who gets a lot of the credit for making golf cool, was hobnobbing with some of show business' coolest customers, the “Rat Pack,” in his prime.

“I knew (Frank Sinatra, Dean Martin and Sammy Davis Jr.) well, but I didn’t spend a great deal of time with them. I played golf with Martin a few times and with the others in pro-ams they were sponsoring. I enjoyed my time with them,” Palmer told ArniesKingdom.com.

Palmer’s ability to make an impact across generational lines is best illustrated by the famous company he has kept. Over time the names have changed, but the level of recognition has stayed consistent. Eisenhower became Clinton, Sinatra became Justin Timberlake, Bob Hope became Jay Leno, and Ted Williams became Michael Jordan. LeBron James even named a shoe after him last summer, dubbing it the “LeBronald Palmer.”

And if King James, the best basketball player of his generation, paying homage to a golfer he never saw hit a competitive shot doesn’t convince you that the original King still reigns supreme, then maybe this will do the trick. The lasting image from the 2013 Arnold Palmer Invitational didn’t have anything to do with the tournament. It was an 83-year-old Palmer planting an innocent kiss on the cheek of a supermodel more than 60 years his junior, Sports Illustrated swimsuit cover girl Kate Upton. It was actually Arnie who played a big role in her rise to superstardom, as if the world needed another reason to be indebted to Mr. Palmer.

They followed their lunch at Bay Hill with a photo shoot and cover story for Golf Digest, where Palmer gave the blonde bombshell a swing lesson.

It’s this attitude that has endeared Palmer to so many for so long. Whether he’s on the course, pitching products, meeting new people, founding hospitals and television networks or inventing drinks, Arnie never settles, he is always looking for something new and he does it with a big smile. It’s the reason so many presidents wanted to be his friend and it’s the reason some think he could’ve run for office himself.

“Arnold had a great ability to look you in the eye, sign an autograph and he made you feel like you were the only person in the world that he was dealing with at that moment, which is so special. There are very people few people that,” said two-time U.S. Open winner Andy North. “Years back they were talking about Arnold running for senator and he could’ve won, he could’ve been the senator from Pennsylvania in 10 minutes. He could have been the governor of Pennsylvania and if he’d have done that he probably would have ended up being the president.”

President Palmer … has a nice ring to it, doesn’t it? But again, why become president when you're already King?