Greller's decision to caddie for Spieth pays off 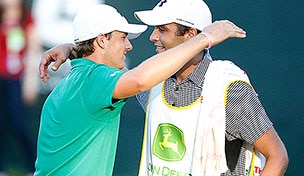 Getty Images
Henrik Bjornstad during the third round of the Bank of America Colonial held at the Colonial Country Club on Saturday , May 20, 2006 in Ft. Worth, TexasPhoto by Marc Feldman/WireImage.com  -

The jokes probably came easy at first, at least for the few who knew the whole story. Michael Greller had been a sixth grade math and science teacher for a decade, helping to shape young minds and stock them with knowledge.

He was a self-described disciplinarian, but only for the first month or two of the school year. That tough exterior would eventually melt away, revealing a man who only cared fiercely for his students.

But here he was, one day before last year’s winter break, taking a one-year sabbatical from Narrows View Intermediate School in University Place, Wash. Some might view teaching as just a job. Greller saw it as a career. And now he was giving up that career for the next year ... to be a professional caddie.

For a kid who wasn’t much older than his students.

So yeah, the jokes probably came easy at first.

And then they stopped.

Because everyone soon found out that Jordan Spieth was no ordinary 19-year-old – and leaving a burgeoning career to carry his golf clubs wasn't such a bad decision after all.

Greller had never set out to be a caddie. A scratch handicap, he attended the 2006 U.S. Amateur Public Links Championship at Gold Mountain Golf Club as a spectator. He noticed a player named Matt Savage from Florida State carrying his own bag, completing his first round of medal play with 75 strokes and a heap of frustration. Looking at Savage in much the same way he cares for his students, Greller offered to help.

“I was like, ‘Hey, dude, I’ll carry your bag for free,’” he recalls. “We went to quarterfinals, and I fell in love with caddying.”

The next summer, he moved closer to Chambers Bay with an eye toward looping at the course in the 2010 U.S. Amateur. He would caddie there about 10-12 times annually after the school year ended. Eventually he latched onto a premier bag for that tournament, working for much heralded Justin Thomas before losing in the second round of match play.

One year later, Greller again became the beneficiary of another USGA event in the Pacific Northwest. With the 2011 U.S. Junior Amateur coming to Gold Mountain, and Thomas no longer eligible, his former loop passed him on to another top player, Gavin Hall. Two weeks before the tournament, though, Hall tweaked his wrist and withdrew. It left Greller without a bag – until he received a phone call from a former champion.

“I still remember it like it was yesterday,” he says. “I went out for a run. When I came back, I had a phone call from Jordan.”

You could say the rest was history, but it wasn’t. Far from it.

“The first hole I caddied for Jordan, I gave him a bad number. I was so nervous. We started on No. 10, but I gave him a yardage for No. 1,” he remembers with a laugh. “He wasn’t flying under the radar; he was expected to win. Anything less than a W, and we didn’t meet expectations.”

He asked Greller to remain on the bag at the U.S. Amateur three weeks later, but the caddie had already committed to Thomas. They stayed in touch, though, and when Spieth earned alternate status for the 2012 U.S. Open, he brought Greller with him. They got into the field when Brandt Snedeker withdrew, then made the most of it, finishing in a share of 21st place and earning low amateur honors.

It prompted the guy who’d taken one week of unpaid leave from teaching sixth grade to rethink his career aspirations. “For me to be able to go in there and feel like I helped him, I was like, maybe I need to think about doing this full-time.”

When Spieth was in the process of making his decision to turn pro late last year, his father, Shawn, called Greller and asked if he’d be interested in caddying all year. Which is how, on the day before winter break for Narrows View Intermediate School last year, the sixth grade teacher declared his intention to go on the road carrying golf clubs for a teenage professional.

“I really wanted to find somebody who would be willing to travel with me the whole time even if I wasn’t playing well,” Spieth says. “Michael is a friend, but also has experience on the bag with me. It was an easy call.”

The near-unprecedented ascendancy of Spieth has already become the stuff of legend, the roll call of accomplishments rolling quickly off the tongue of most fans. He entered the year with no status on any major tour; he finished in the top-seven in two Web.com events; decided to honor a sponsor’s exemption into the PGA Tour’s Puerto Rico Open and finished tied for second place; earned eight more top-10s in the big leagues, including his first win at the John Deere Classic; and will compete for the United States team at the Presidents Cup.

It was after the second of those PGA Tour top-10s – a share of seventh at the Tampa Bay Championship back in March – that Greller called his old school. That one-year sabbatical? He made it permanent. He was no longer a sixth-grade teacher. He was now a full-time professional caddie.

“I loved what I did, but I was ready to try something different,” he admits. “Ellie, my wife, was watching the Masters with me in the spring. She said, ‘If Jordan is winning the Masters in 10 years, are you going to be like, why didn’t I pursue that?’ I know I’d be kicking myself.”

As steep as the learning curve has been for a rookie golfer who turned 20 in July, it’s been equally elevated for his 36-year-old looper.

For the uninitiated, caddying isn’t just about carrying clubs and reading numbers off sprinkler heads. A caddie must also serve in the roles of psychologist, agronomist, meteorologist and mathematician. In the heat of a final round on the leaderboard, these roles intensify tenfold.

Unlike for Spieth, there are no distinct numbers on which to judge Greller’s season, but the comments from his veteran peers speak volumes.

“You can tell he’s learned quickly,” says Paul Tesori, who caddies for Webb Simpson. “He and Jordan both seem a lot more mature than their first year on Tour. The little things that take years to learn, they already have a firm grasp on. He’s taken to the role so quickly; he seems really comfortable out there.”

Much of that comfort comes from a relationship that somehow avoids awkwardness. As Greller points out, his boss can’t legally drink or rent a car. Instead of that dividing them, though, it’s just another fact for which they give each other endless ribbing.

“Every day, someone asks if we were teammates or classmates. I always tell him it’s because of his receding hairline. I get a kick out of that,” Greller says with a chuckle. “I see it more as a brotherly relationship. We compete hard and talk a lot of trash. I was born and raised in Michigan. He picks on my teams, I rag on his Texas teams.”

Spieth concurs. “We give each other a lot of crap. It’s almost like a brother situation. We fight over the dumbest things, like sports.”

Earlier this year, they were driving from Houston to San Antonio when Greller wanted to listen to the Michigan basketball game against Florida on the radio. Spying an opportunity to get under his caddie’s skin, Spieth continually kept flipping the station to country music instead.

The competitions don’t end there, either. Whether it’s cards, pool, tennis or hoops, they’ve found plenty to keep them busy during the downtime on the road.

It’s not all fun and games, though. When Greller’s father had some health complications during the RBC Heritage, Spieth implored him to get on a plane and not worry about the tournament.

“I was really upset,” Greller says. “The words Jordan said to me just showed me how much he does care about me. He knows how important family is to me. I just saw a different side to him that I really value. That’s just how he’s been raised. He’s just very real.”

There’s more, too. By winning the John Deere Classic in July, Spieth qualified for the guaranteed-money WGC-Bridgestone Invitational a few weeks later. He was the only uninjured player to skip the event, citing fatigue as the explanation. Maybe, though, he just didn’t want to put his caddie in a bad spot. Because that weekend he actually did play golf, taking a spot in one of five foursomes of Greller’s friends and family members at Chambers Bay, then staying for his wedding ceremony and reception the next day.

Despite caddying for a player whose ascent rivals only that of Woods in the past two decades, Greller understands there’s still plenty left to learn.

One lesson came at the recent Deutsche Bank Championship. Based on a tweet from Kip Henley, who works for Brian Gay, Greller was informed that any caddie for a player in the top 10 of the FedEx Cup standings would receive a BMW courtesy car for the week. When he approached the tournament’s transportation staff about his reward, they howled with laughter in response.

It’s this naïveté from a guy just nine months removed from teaching sixth grade that leads Spieth to call Greller’s the more impressive of their two stories this year.

“I had a big change in my life this year, but his was a bigger change,” Spieth explains. “He was in such a routine, doing the same thing all the time. It’s pretty amazing. He’s learned so quickly. It’s not just learning the fundamentals or mechanics of caddying, but also the intangibles of dealing with me, too.”

As Tesori deadpans, “I don’t know what he was teaching in sixth grade. We might need to check out that class; it might be an entire class of golfers over there.”

The jokes still come easy, but they’re no longer at Greller’s expense. Giving up a burgeoning career to caddie for a pro golfer who’s not even old enough to legally drink or rent a car? Turns out it wasn’t such a bad decision after all.