IRVING, Texas - The record books will forever show Mike Weir finishing in second place on Sunday, but the record books don't understand that not all close calls are created equal.

This was a second place from a player who hadn’t finished that high in five years.

This was a second place from a player who hadn’t broken 70 since January.

This was a second place from a player who hadn’t yet considered what he would do after this season, when his final year-long PGA Tour exemption expired.

Weir won’t have to worry about that now. His runner-up finish to Brendon Todd at the HP Byron Nelson Championship netted $745,200 – enough for the 44-year-old past Masters champion to clinch his card for another year.

“I was definitely determined to try to win today, but I can feel good about the way I handled things out there and the way I played,” he said after a final-round 67. “Just wasn't meant to be, but I'm happy with today.”

It couldn’t have come at a more appropriate place, either.

It’s been nearly eight full years since the man known affectionately as Lord Byron passed away at 94. Many of the young PGA Tour professionals in this year’s field never got the chance to compete in this event while he was still alive, walking up the hill from the 18th green to shake hands with a legend.

Weir clearly remembers those days. But it was another encounter with Nelson that left even more of an impact.

After winning the Masters in 2003, he hosted the Champions Dinner before the next year’s edition of the tournament. Seated right beside him at the head table was the 1937 and ’42 winner.

“I got to spend the whole evening with him,” Weir recalled. “That was really special.”

Nelson’s impact on him can’t be overstated. In fact, the man responsible for keeping this tournament alive was in the forefront of Weir’s mind throughout the final round.

“I kind of kept that in my heart a little bit out there today. I would say that he was enjoying the golf, I guess - not just myself, but all of us. I think he would have liked what he saw out there.”

That respect for Nelson helps explain a story from this week a year ago.

Weir was on the first tee Thursday afternoon, speaking with Byron’s widow, Peggy. She told him that the girls’ golf team from nearby Byron Nelson High School had just won the state championship and they were having a banquet to honor the players that night. On a whim, she extended him an invitation.

And so the man with a Masters victory and seven other PGA Tour wins, in the middle of a tournament, without getting paid a dime, watched as the high school kids were feted with their accolades.

“It was a really special moment,” Peggy recalled. “He wasn’t asked to speak or anything like that. I just asked him as my guest.”

“I know what it was like when I was in high school,” explained Weir. “I remember the hockey guys showed up and it was a thrill, so I thought, this is a high school golf team. Maybe it would be a good thing for me to show up and say hi.”

Consider it an act of goodwill from a man who had received his share of it from Byron himself at one time.

“I have so much respect for Mr. Nelson and Peggy,” he said. “She puts in a ton of work. She’s here every day, baking us cookies. In my mind, it was the least I could do. I was just like, yeah, absolutely I’ll go. I just think she’s a great lady.”

Fast forward to this week and Weir was giving back once again. He didn’t attend any banquets, but four days of title contention gave the tournament a weekend buzz – both on the course and back in his native Canada, where fans are still wacky for Weirsy.

Following a closing par on Sunday afternoon, Weir climbed that hill from the 18th green. He saw Peggy Nelson amongst the masses, smiled, removed his hat and gave her a hug. “That was great,” she told him, then handed him a freshly baked chocolate chip-walnut cookie.

Not long after that, Weir was asked if he believed in karma. The suggestion was a logical one, that showing respect and attending a banquet for high school kids can somehow pay dividends down the line. 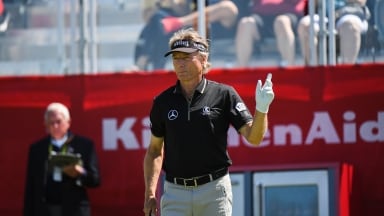 Stephen Ames leads Bernhard Langer and Mike Weir by two headed to the final round of the Senior PGA Championship. 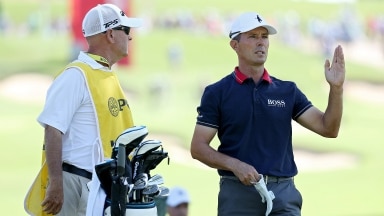