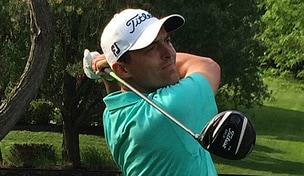 Getty Images
A two-time Ryder Cupper, the Englishman won 41 times as a pro, including 23 on the European Senior Tour.  -

He’s an Ohio kid who upon first glance is a mere footnote among the superstar names in this week’s Memorial Tournament field. A former NAIA national champion at Malone University, he’s been toiling on the mini-tour circuit for a few years and now owns conditional status on the Web.com Tour.

When he found out he’d received an exemption into Jack Nicklaus’ tournament, he didn’t believe it. “I thought I was getting pranked,” Justin says. Forget about being buddies with any of his fellow competitors; he’s never even met any of them.

Yes, this feels like your typical local-boy-makes-good story – if you consider a 24-year-old from Canal Fulton, two hours down the road, both local and a boy.

It wasn’t easy, though. Justin wasn’t a country club kid always destined for success. In fact, it’s nothing short of remarkable that after everything he’s been through, the worst tragedy you could ever imagine, he’s reached this point in his career.

“Oh, yeah. I’m proud,” beams his mother, Debbie. “He could have turned out so much worse, you know what I mean?”

You’ve probably heard similar stories to that of Justin, at least this part of the story.

Justin remembers the first time he beat his father in golf. It was New Year’s Day of 2001 and the 11-year-old had just gotten a new set of clubs for Christmas. This was a mild winter day for northeast Ohio – upper-30s mild – and the two of them scraped it around Turkeyfoot Lakes Golf Links, right off Route 619, just a few minutes from Firestone, site of the local PGA Tour event. When they finished nine holes, they retreated to the clubhouse to warm up. Justin had hot chocolate; his dad ordered a coffee.

Not long after, Tim Lower handed the scorecard over to his son and asked him to add it up. Justin looked up and smiled. He’d shot 42. His dad shot 43.

“He said, ‘Yeah, don’t let it happen again,’” Justin recalls with a laugh. “He was proud, but he was competitive, too.”

He remembers the first junior tournament he ever played, when his dad let him play hooky from school on a Friday. He was so nervous that he vomited throughout the round. He still finished second.

He remembers going to Tim’s weekly softball games, sometimes watching along with his 10-year-old brother, Chris, and their cousins, but more often hitting golf balls in an adjacent field.

He remembers his dad’s thick, no-nonsense mustache, signifying that he wasn’t a man to be taken lightly. He remembers his brother being an American history wiz, once setting up 500 toy soldiers for battle on the floor of their home.

Justin and Chris were in a bowling league and had finished early on this Saturday morning, the day before Easter and not long before Justin’s 16th birthday. At 10:36 a.m. – “I distinctly remember seeing that time when I got out of the car,” he says – Tim pulled his teal 1997 Ford station wagon into the parking lot at Lyons Den Golf Club and dropped Justin off for a day of playing and practicing.

He remembers 5:30 coming and going, and then 6. No sign of his dad. Pretty soon it was just Justin and Andy Lyons, the course owner, who were still there.

“My mom called me,” he says. “She knew something was wrong. Just that mother’s intuition.”

Debbie picked up Justin from the course, hoping they’d somehow just miscommunicated. Hoping they’d find Tim and Chris waiting for them at home.

Instead, she received a call from the American Legion in neighboring Marshallville. Tim had spent the day – with Chris – shuttling back and forth between there and a job digging graves for an excavation company in a nearby cemetery before leaving to pick up Justin. The caller said there’d been a single-car wreck out on Fulton Road.

When Debbie and Justin arrived, they found a local resident directing traffic. Just behind him was the teal Ford station wagon, flipped upside-down.

Heading eastbound on the two-lane road, the car had veered off to the right. Tim tried to overcorrect and pulled it into a ditch on the left side. The car went airborne and crashed into a utility pole on its passenger side, where Chris was seated. It landed on its roof at the base of the pole.

“They said if my dad was wearing his seat belt, he would have survived,” Justin explains. “But my mom says he wouldn’t have been able to live with what he did to Chris.”

The coroner found that Tim Lower was driving over 80 mph on a road where the speed limit was 55. He had fallen asleep and his 10-year-old son tried to wake him up.

He had been drinking all afternoon. His blood-alcohol content was .23, nearly three times the legal limit.

“Right after the accident, I found out he was an alcoholic,” Justin says. “I had no idea before that. But then signs started to add up. I remember one time the summer before that he had picked me up at the golf course and came into the clubhouse. When we left, he got lost going to the parking lot. I thought he was just goofing around. After the accident happened, it clicked in my mind that he was drunk at the time and had forgotten where he parked.”

He remembers the ambulance lights, forever burned into his mind.

He remembers his mom being inconsolable, screaming and crying for hours afterward.

“I remember hearing them. I was just like, ‘What’s going on?’ I literally tried to pinch myself. I didn’t believe what was going on.”

He remembers having to place a baseball cap on his brother’s head for the funeral, to cover up the sizable gash.

He remembers playing golf three days later. First by himself, then catching up to the foursome of regulars in front of him. He remembers how they each hugged him, offered their condolences, let him play with them. It was therapeutic.

Two months later, he played in his first tournament following the accident. Just a one-day event. No big deal, but in some ways, the biggest deal for him. With about 30 friends and family members watching, Justin hit every fairway and every green in regulation. He shot 64 and won by seven.

“In the grand scheme of things, it didn’t mean anything, but it meant something to me,” he recalls. “I went out there with that big burden on my shoulders and did something special.”

He remembers golf being his only salvation, the course his sanctuary. He’d go to classes, but wouldn’t do any work. His grades slipped. The big-time college golf programs stopped calling.

He remembers not even contacting Malone coach Ken Hyland until April of his senior year. He was accepted into the school and accepted as part of the team. Signing with 2,200-student Malone, just 15 minutes from home, turned out to be a blessing in disguise. He was able to play right away and though he struggled for those first two years, by his junior season he was the NAIA’s best player, the only one to ever receive the Jack Nicklaus, Arnold Palmer and David Toms awards.

“He is the most positive person I have ever coached,” says Hyland, who just finished his 42nd year at Malone. “When I told him something, he’d say, ‘I will.’ It was never, ‘I’ll give it my best.’ He always ends the sentence with something positive – and he’s the hardest working golfer I’ve ever had.”

Justin thinks his dad would be proud of what he’s accomplished, but he’d keep him grounded, too. The man with that no-nonsense mustache always did.

“He’d just tell me to work hard and stay humble and don’t really gloat about anything, because I really haven’t done anything yet,” he says. “He’d probably joke around and tell me not to embarrass myself.”

Whenever he has a wicked lie in the rough or needs to sink an important putt, Justin will look to the sky for a little divine inspiration. He’ll whisper to his dad and brother; he knows they’re listening.

Chris would be 19 now, almost 20. He and Justin were just getting closer when he died. Even though Chris wasn’t much of an athlete, Justin likes to think that he might have matured into a golfer, maybe even played in college at Malone, just like him. He thinks that maybe during the summer months, when school is out, he’d be alongside him for every step, caddying at the mini-tour events and on the Web.com Tour and even this week at the Memorial.

You’re probably rooting for Justin Lower now. But there’s more to this story.

There is more than just the mourning, though. There is guilt. The constant struggle with knowing that none of this had to happen. When it comes right down to it, to be perfectly blunt, if you really want to look at it this way, his father killed his brother.

Justin doesn’t see it that way, though.

This is where the story becomes even more amazing. This is the part where, if you’re not already rooting for Justin Lower to make the cut and contend on the weekend and – hell, let’s just go for it – win a tournament against a bunch of superstars he’s never even met before, you will now.

“I’ve never blamed my dad for it,” he says. “Part of that reason is because he was on his way to pick me up. I almost – this may sound naïve – but I almost blame myself. Did I really have to go golfing that day? I had my temporary license. My 16th birthday was a week after that. Would I have been man enough to stand up and say, ‘Dad, you can’t drive’?"

“I have constantly fought that battle with myself, over and over. But I’ve never blamed my dad for anything.” 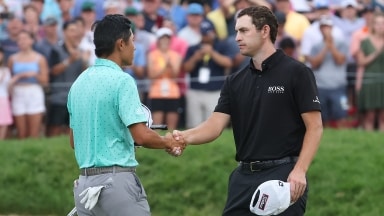 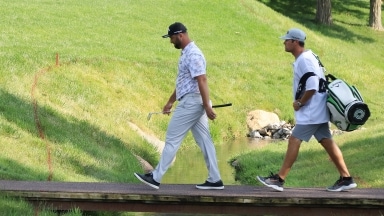