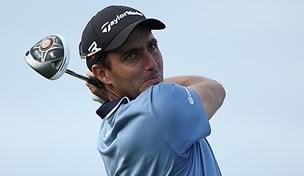 Getty Images
DUBLIN, OH - OCTOBER 03: (L-R) Lindsey Vonn, U.S. President George W. Bush and Nadine Moze poses for a photo on the first hole as they cheer for the U.S. Team during the Day One Four-Ball Matches of The Presidents Cup at the Muirfield Village Golf Club on October 3, 2013 in Dublin, Ohio. (Photo by Chris Condon/PGA TOUR)  -

OK, so it’s not exactly his revolution to plot, but Molinari has been serving on the frontlines for years. Armed with more numbers than a phone book, he is prepared for what’s to come.

His part of this story dates back to 2003, when the Italian was still an amateur. An engineering student who’s always had a keen thirst for wanting to know how things work and where they can be improved, Molinari began keeping a spreadsheet of every personal statistic from every round. Beyond just fairways and greens percentages, he would monitor where shots landed and their ensuing results. He did this while winning the 2005 U.S. Amateur Championship; he continued it while competing for the victorious European team in the 2010 Ryder Cup.

In the spring of 2011, the PGA Tour introduced a new statistical category called strokes gained-putting. The brainchild of Columbia Business School professor Mark Broadie, the stat was the first of its kind to measure how golfers compared to the median as opposed to blindly bleating numbers about putting average and total putts without giving the data any perspective.

Naturally interested in how his personal data could be interpreted, Molinari contacted Broadie. The two met just before the 2011 U.S. Open, and the professor plugged nearly a decade’s worth of the player’s stats into a program that analyzed what these numbers actually meant in relation to his competition.

“I had all of the data from before,” Molinari said. “I just didn’t have the ability to calculate the gains and the losses. I was very skeptical in the beginning. But when something is based on fact, when you look at the numbers for 10 years and the numbers show consistency every year, it’s difficult to say that’s wrong.”

Thanks to the professor, he was not only able to analyze his numbers, he was able to use these findings to practice specific areas that needed improvement.

Pretty soon, so will every other golfer. If they so choose.

In March, Broadie will release his newest book, “Every Shot Counts.” It will be filled with more than 10 years of statistics from both the professional and amateur ranks, employing comparative analysis to prove where players are gaining and losing strokes against their competitors.

The data in the book will present a revolution already found in other sports. We’ll get to those analogies, but let’s not bury the lede any longer. There’s one headline-grabber that is sure to make headlines around the world:

In a revelation that is sure to leave the old-school “drive for show, putt for dough” thinkers stomping in their soft spikes, Broadie found that 68 percent of the differential between golfers can be found in the long game, with only 17 percent attributable to short game and 15 percent to putting.

“When I compare the top players on the PGA Tour, I find that the long game contributes about two-thirds to their success while the short game and putting contributes about one-third,” Broadie said. “Initially I was surprised, so I analyzed the data in different ways and found that all roads led to the same conclusion.”

For example, in any given year if you looked at the scoring average of the top 10 on the money list compared with those ranking 116-125, the scoring average differential would be about two strokes. Based on Broadie’s comparative analysis, about 1.4 of those strokes gained would come from the long game, while only 0.6 would be attributable to short game and putting.

If the numbers alone aren’t enough to reshape how you see the game, consider Molinari’s anecdotal evidence.

“You and I are having a match,” the man with nine career professional victories says to a single-digit handicapper. “Would you rather have a match on the putting green, chipping or who hits it longer and straighter? You’d take the putting green every time. At least you’d have a chance. You’d have no chance in the other areas. When you think about it, it makes sense.”

And when you think about it, it makes sense that all of the statistics we’ve used for so long to measure a player’s talent and success now seem archaic by comparison.

If it sounds impossible, consider the statistical changes in baseball over the past 10-15 years.

The previous generation would measure its stars on the diamond by batting average and runs batted in, win percentage and earned run average. Those still exist, but have yielded importance within the game’s inner circles to acronyms like WAR (wins above replacement) and VORP (value over replacement player). These numbers may not be as easy to understand, but are undeniably more reliable in providing useful analytical data.

There is little reason to believe that golf statistics such as driving accuracy and greens in regulation won’t soon be replaced in significance by more meaningful data that compares players against their competition.

“Sometimes I thought I was driving it well and it didn’t show in the fairways hit, but if you look at how many shots I gained off the tee, you immediately see it,” says Molinari, who’s missed the last three months following surgery on his left thumb. “I can tell you a few tournaments where I had great driving weeks. I was only hitting nine or 10 fairways per round, which is not great, but I go look at the stats and I was gaining a half-shot per round. Then there were other rounds where I’d hit 12 fairways, but hit one in the water and one out of bounds, and I’d end up losing shots against the field.

“The right thing is that you have a number.”

Broadie understands that it will be difficult, if not impossible, to teach an old dog new tricks. Which is to say, those who have spent an entire life playing this game and steadfastly believing that putting is more important than anything else won’t soon allow statistical proof to affect their theory.

“Lower scores come from improving weaknesses while maintaining – or even improving – strengths,” he continues. “Strokes-gained analysis makes it much easier to identify those strengths and weaknesses.”

Here’s where Broadie’s research could change the entire spectrum of how the game is played, not just at its uppermost levels. Not only does his analysis favor long game over short game for touring professionals, the results remain consistent for amateurs, as well.

He knows this because for the past decade, Broadie has mapped every single shot in every group in which he’s played. He’ll laser each yardage, take note of each club and write down each result. (And no, it remarkably doesn’t take him any longer to play than anyone else.) These findings will be released in the book, but they mirror those of game’s best.

In other words, work on your long game.

Perhaps, though, more customized statistical analysis will soon become all the rage. Ponder this question: Would you rather shell out 50 bucks to have an instructor loosen your grip or change your elbow position on the range, or spend that money to earn knowledge on where you’re gaining and losing strokes to those of the same skill level? It’s a radical idea, but hey, these are revolutionary times.

And these results can alter the way every golfer approaches the game.

“It does change the way you practice,” Molinari maintains. “You can immediately tell where your strength points and weaknesses are. It’s a number. You can compare yourself between one season and another. In 2010, I was playing well and I was gaining a half-point on the field; in 2011, I was playing poorly and I was losing 0.3. My scoring average was affected by 0.8.”

Both Broadie and Molinari realize there will be some quick adapters to this analysis, some who will remain interested without it changing their methods and others who will forever eschew these findings.

The easygoing Italian isn’t one to provoke social media wars, but he recently got so frustrated after tweeting some of these results and receiving pushback from establishment types that he ended a string of 140-character correspondences by posting: “Believe what you want, I cannot care less. The truth is out there, you simply need to understand it.”

It’s true. Many will refuse to believe that driving isn’t for show and putting isn’t for dough, no matter what the numbers mean.

As for Molinari, there may be no greater endorsement of Broadie’s research than when he’s asked whether his fellow players will soon use this data to change their well-established work habits.

The pro looks sternly ahead for a few seconds, then laughs, more to himself than his company. “Hopefully,” he says knowingly, “they won’t.”