The story of Bobby Jones and Royal Lytham 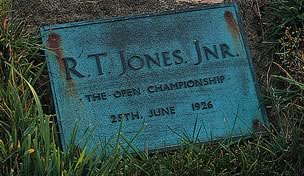 Getty Images
AUGUSTA, GA - APRIL 10: Ian Poulter of England walks across the 17th green during the third round of the 2010 Masters Tournament at Augusta National Golf Club on April 10, 2010 in Augusta, Georgia. (Photo by Harry How/Getty Images)  -

Golf is fortunate to have great venues for the Opens – St. Andrews, Muirfield and Carnoustie in Great Britain; Merion, Pebble Beach, Winged Foot and Oakmont in the United States. They are sacred ground.

But in the British Isles one site seems under-appreciated for the greatness that took place there – Royal Lytham and St. Annes, the site of this year’s Open Championship.

Perhaps Lytham doesn’t receive its just due because it’s located in England and not in Scotland, or for the reason that the compact layout is only 7,086 yards long, or because that the front nine begins with a par-3 hole. Whatever the reason, it certainly isn’t due to the spectacular play that has taken place over its links land, especially in the first Open Championship contested at Lytham in 1926.

It all started in grand fashion with Bobby Jones’ dazzling victory. But it almost never came to be. It’s a wonderful story.

Contrary to popular opinion, Jones did not come from a wealthy family, so travel to play in the famous British championships was restricted mostly to those years where he was selected to play on the U.S. Walker Cup team. Typically, the U.S. team would come to the U.K. to play in the Walker Cup – with the travel bill footed by the U.S. Golf Association – and also play in the British Amateur; sometimes the players would add the British Open.

Although Jones had won the U.S. Open in 1923 and the U.S. Amateur in 1924 and 1925, he was eliminated in the sixth round of the British Amateur at Muirfield by unknown Andrew Jamieson. In the Walker Cup at St. Andrews, he had two dominating wins – the first, a 4-and-3 victory in the foursomes while partnered with Watts Gunn, over burly Cyril Tolley, Britain’s best amateur, and partner Jamieson; the second, a thorough thrashing of Tolley by the lopsided margin of 12-and-11 in the singles. Although he didn’t know it at the time, Jones’ fine play gave a hint of great things to come.

Scheduled to return home after the Walker Cup, Jones had a change of heart and entered the Open Championship at Royal Lytham. However, due to the heightened interest in the Open, the R&A instituted a series of sectional qualifying tournaments for the first time. Jones chose the southern one, at Sunningdale, not far from his favorite hotel in London, and perhaps more to the point, the club where his favorite club maker, Jack White, was affiliated.

On the eve of the first qualifying round, White delivered a new driver to Jones who promptly named it “Jeannie Deans,” after novelist Sir Walter Scott’s heroine. It was a match made in heaven as Jones’ results with his spanking-new driver would make an indelible impact on the golf world over the next five years.

Jones, with “Jeannie Deans” in his bag, shot a first round of 66 in the first round of the qualifier. In fact, it was a perfectly symmetrical round – it featured 33 strokes out and 33 strokes in, 33 putts and 33 other shots, not a two nor a five on his scorecard. One well-respected writer even referred to his round of 66 as the “perfect round of golf.”

In the days when sub-70 rounds were rare, Jones followed with a 68, winning the qualifying medal by seven strokes.

In his first round in the Open, Jones was four shots behind leader Walter Hagen’s 68; in the second round, he added another even-par 72, leaving him tied with professional “Wild” Bill Mehlhorn at 144.

Paired with American professional Al Watrous in the double-round finale on the third day, Jones shot a 73 to Watrous’ 69, leaving “Wee Bobby” two behind the leader Watrous with the fourth round to go.

But a funny incident intervened at the lunch break. After the morning third round, Jones decided not to go back to the hurly-burly of the clubhouse for lunch, but rather go into town for a quieter meal before the fourth round. On his return, the gatekeeper demanded to see Jones’ ticket. Jones proceeded to show his competitor’s badge, but that was not enough for the overly officious gentleman who steadfastly refused Jones entry. Ever resourceful, Jones went to a nearby ticket booth and bought a spectator’s ticket, thus becoming the only person ever to have to buy a ticket to gain entrance to a major championship so could get back into the course to try and win.

In the fourth round, Jones putted erratically, but was still two back with five to play. He parred 14 and 15, as Watrous bogeyed each. All even on 16, the co-leaders each parred the hole.

On 17, Watrous’ drive split the fairway, while Jones hooked his tee shot into a gourse-strewn sandy area – not quite the formal bunker it is today – on the left side of the fairway where it doglegs to the left about 175 yards from the green. It was not a good tee shot, especially under the circumstances, but what was about to happen is the thing grand legends and great reputations are made of. It would electrify the golf world on both sides of the Atlantic.

“… the greatest shot in the history of British golf.”

First to play, Watrous – feeling the pressure of being in contention for a major championship – hit a weak shot to the front edge of the green. Jones, faced with a semi-blind shot off loose sand to a rock-hard green, selected a mashie – about a strong 5-iron by today’s standards. Jones picked the ball cleanly off the sand, lifted it over the dunes and onto the green, just inside Watrous’s ball. All who witnessed it recognized it as perhaps the best shot they’d ever seen.

One Scottish writer later called Jones’ mashie “… the greatest shot in the history of British golf.”

Watrous nervously three-putted 17 for a bogey, to Jones’ two putts for his par. On 18, Watrous three-putted once again to bogey, as Jones parred the last to win his first British Open with a then record 291 total.

As a result, Jones became the first amateur in 29 years to win the Open Championship and also the first American amateur ever to do so. At the conclusion of the Open, another British journalist summed up Jones’ win  “… his victory was one of the most popular in the history of athletic sports. He not only won the cup with his golf, but the hearts of Britishers by his demeanor and character.”

To this day, a metal plaque is located on the spot just off the 17th fairway where Jones hit his miraculous shot. There is also an oil painting of Jones, along with the mashie he used on 17, proudly on display in the clubhouse.

Jones returned home to an unexpected welcome, a raucous greeting at the Port of New York and a hero’s ticker tape parade up Broadway to City Hall. A contingent of 200 Atlantans greeted him on a chartered boat at Quarantine, watched him proceed with great fanfare amidst crowds of cheering New Yorkers and stood by as Mayor Walker greeted him on the steps of City Hall. It was quite a day for America’s new hero.

With Jones winning the first Open Championship held at Royal Lytham, he established the standard of excellence for play over these hallowed grounds. Future Open Championships at Lytham would live up to the high standard Jones set as they would feature many of the greats of the game – Bobby Locke in 1952; Peter Thomson in 1958; Tony Jacklin in 1969; Gary Player in 1974; and Seve Ballesteros with two wins at Lytham, the first in 1979 and the second in 1988. Including Jones, there are 19 Open Championship victories among this majestic group – seven of them at Lytham.

So when you watch the Open at Lytham this week, remember it started with the greatest amateur of them all, as Bernard Darwin referred to him – the spectacular, but modest, young Atlantan Bob Jones.