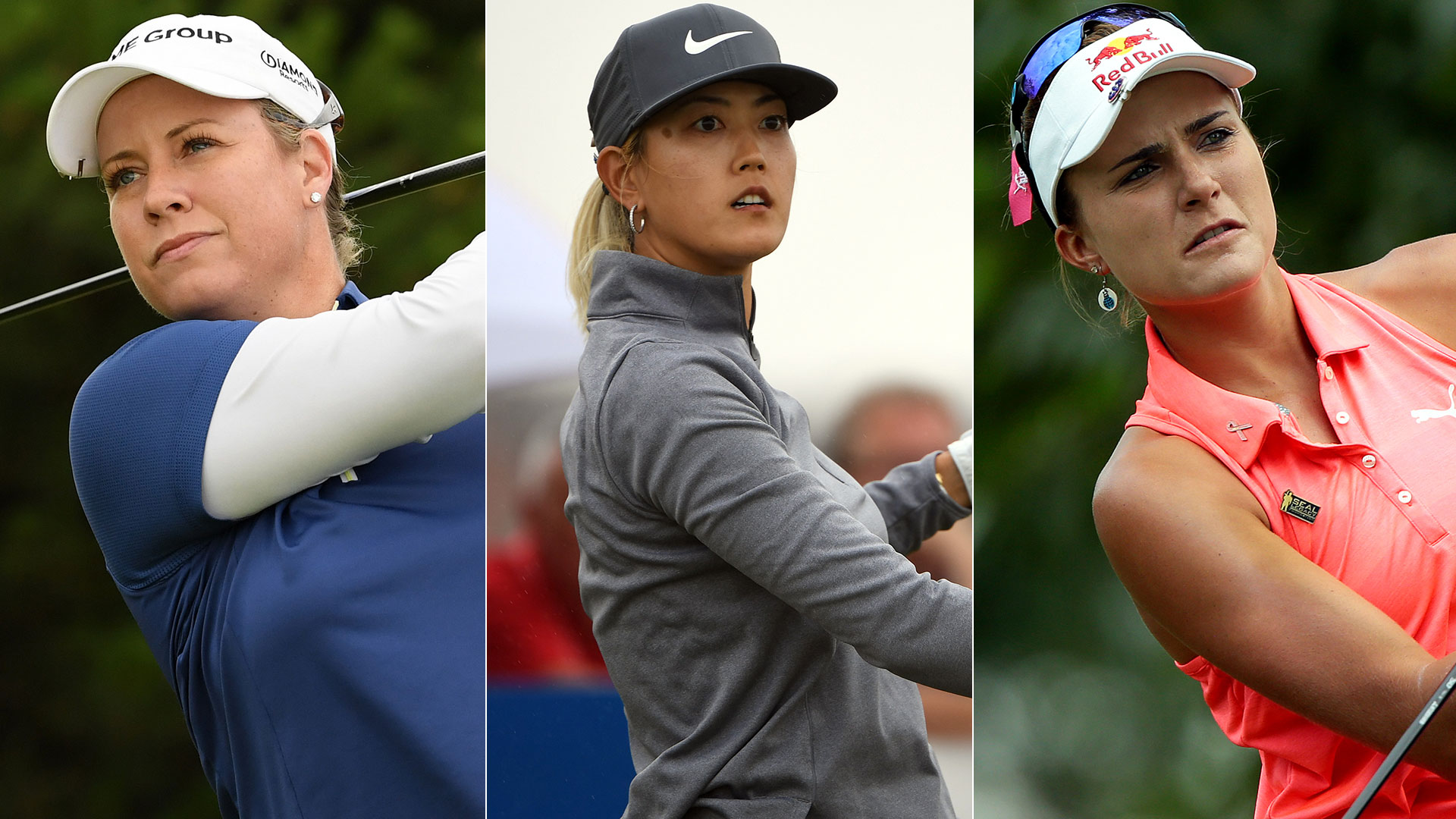 LYTHAM ST. ANNES, England – Where are the American stars?

Nowhere to be found on the Ricoh Women’s British Open leaderboard.

Lexi Thompson skipped the championship to “recharge my mental batteries.”

Michelle Wie withdrew in the first round with a right hand/wrist injury and will be out recuperating for awhile.

Stacy Lewis and Gerina Piller are out on maternity leave.

Paula Creamer and Morgan Pressel failed to qualify for the championship.

Danielle Kang, the last American to win a major, missed the cut. So did major championship winners Brittany Lincicome and Brittany Lang.

Mina Harigae is the great American hope going into the final round at Royal Lytham & St. Annes, the top Yank on the leaderboard at T-7, five shots off the lead after posting a 3-under-par 69.

All credit to Harigae, 28, who is rebuilding her game, confidence and spirit as a former junior phenom and winner of the U.S. Amateur Women’s Public Link Championship. She’s No. 210 in the Rolex Women’s World Rankings and looking to make her first LPGA title a major.

Brittany Altomare is the next highest American on the board at T-13, seven shots off the lead. Like Harigae, she’s looking to make her first LPGA title a major. She nearly did it late last year, making a stunning run into a sudden death playoff at the Evian Championship, ultimately losing to Anna Nordqvist in sleet and rain in France. Altomare was No. 118 in the world before making that brilliant run.

Jessica Korda and Cristie Kerr are the next highest Americans on the leaderboard at T-17 and 20th, respectively, but appear to be too far behind to be factors in the final round. Korda is a rising star, Kerr a proven one. Kerr, 40 now, has won 20 LPGA titles, with three worldwide victories last year. She has a two decade perspective watching how the changing nature of women’s golf has challenged the American ranks.

Kerr needs some help battling the world the rest of this season and beyond.

Kerr believes American struggles have more to do with the global explosion of the game than American failures, but ...

“I am a little concerned about it,” Kerr said.

Thompson, Jessica Korda, Danielle Kang and Annie Park are the most accomplished American winners 25 and under. Kerr was asked if she sees other young Americans capable of bolstering the U.S. ranks and winning on the game’s largest stages.

“I hope so,” Kerr said. “I do see a lot of talented American players out there, but they have to break through and put their stamp [on the tour], that they are here, and they are going to be competing awhile.”

Of course, Thompson is a big key to future American success. At 23, she has been on the cusp of No. 1 for a few years now, with nine LPGA titles, a major among them.

“It is extremely difficult for me not to play in this prestigious major,” Thompson wrote on Instagram in announcing her withdrawal from the Women’s British Open. “But I realized recently that I need to take some time to work on myself.”

Thompson is winless this year, coming off a two victory 2017 campaign that was filled with competitive challenges. There was heartache losing the ANA Inspiration after a controversial penalty. There was frustration missing a short putt in the season finale that could have led to her winning the CME Group Tour Championship, ascending to world No. 1 and claiming her first Rolex Player of the Year Award. There was also personal heartache watching her mother battle cancer and a grandmother die.

Kerr was asked if she was concerned about Thompson needing a break during a major.

“I took three weeks off before this tournament because I was a little burned out, and my back was bothering me a little bit,” Kerr said. “It just felt like I needed to get away from the game. There’s nothing wrong with that.”

Kerr said she believes Thompson’s ongoing wrist issues were likely also a factor in this break, and that the way Thompson explained her need for a mental break probably came off sounding a lot more troubling than intended.

“I know every time she comes over here and hits on this hard ground, her wrist gets worse,” Kerr said.

Kerr believes Thompson will be fine.

“I know she’s OK,” Kerr said. “She just needed a break and her wrist needs a break.”

The Americans miss Thompson, who plans to return in two weeks to defend her title at the Indy Women in Tech Championship. They also miss Lewis and Piller.

And the Americans are feeling outnumbered by all the rising young stars from the rest of the world.