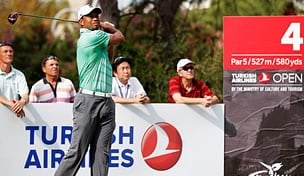 Getty Images
Tiger Woods of the USA plays his second shot on the par 3, 16th hole from against a tree during the third round of the 2013 Turkish Airlines Open on the Montgomerie Maxx Royal Course on November 9, 2013 in Antalya, Turkey. (Photo by David Cannon/Getty Images)  -

Fifteen years ago, Tiger Woods broke through to win his first European Tour event outside a major in spectacular fashion.

Eight shots down to Ernie Els entering the final round of the Johnnie Walker Classic, Woods blitzed Blue Canyon Country Club in Thailand to win with a final-round 65. He beat Els in a playoff.

“It’s amazing what he did,” Els said in the wake of that defeat.

Woods will make his 121st start in a European Tour event when he tees it up Thursday at the Turkish Airlines Open.

You think Tiger Woods’ winning percentage is good on the PGA Tour? He’s even more of a certain thing in a European Tour sanctioned event.

Woods has won 40 of the 120 European Tour events he is credited for playing as a pro in his career. That’s a 33 percent winning rate. Yes, World Golf Championship events (18) count in that total. So do majors (14). If you want to put an asterisk there, put an asterisk, but those events count for European Tour pros, too.

Yes, the nature of PGA Tour and European Tour co-sanctioned events can blur the statistical lines between the tours, but those events still pit the best of both tours against each other.

Thirteen years ago, when he made nine starts that counted on the European Tour, Woods was so comfortable he considered becoming a member of the European Tour while also playing the PGA Tour.

“I thought about it, back in early 2000, when we had seven, maybe eight events, that were co-sanctioned events, and the minimum number to play to be a member was 11 at the time,” Woods said in his news conference Wednesday at the Turkish Airlines Open. “I obviously just had to add a few more, but I didn’t go that route, and Monty ended up getting a few of those [Order of Merit] titles those years.

“It was something I did consider.”

Colin Montgomerie probably should have sent a thank-you note to Woods for not becoming a European Tour member. Montgomerie’s run winning seven consecutive Order of Merit titles in the ’90s would have ended a year early if Woods’ were a member. Woods actually led the European Tour in earnings in ’99, 2000, ’02, ’05, ’06 and ’07, but he wasn’t eligible for the Order of Merit because he wasn’t a member.

Two years ago, Luke Donald was credited as the first player to win the PGA Tour money title and European Order of Merit in the same season. Woods actually would have done that six times if he had been a European Tour member those years.

Woods was credited for winning a European Tour event over 12 consecutive years (1998-2009).

While much is made of Woods’ pursuit of Sam Snead’s PGA Tour record 82 titles, and Jack Nicklaus’ record 18 professional major championship titles, Woods is also sneaking up on Seve Ballesteros’ record 50 European Tour titles. Bernhard Langer (42) is second behind Ballesteros with Woods third.

Yeah, if Tiger passes Seve on the Euro Tour win list, there is probably an asterisk in order. Woods, after all, has won 29 of his 40 “European Tour” titles in the United States.

Woods, of course, is the favorite to win this week. Ladbrokes favors him 4/1 to win with Justin Rose at 10/1.

“This has turned into one of the biggest events on the European circuit,” Woods said before his practice round Wednesday. “So, I’m excited to be here, excited to go out and take a look at the golf course today and see how it’s playing and come up with a plan to play it the next four days.”

Woods complained that he wasn't sharp when he lost that 18-hole exhibition match to Rory McIlroy last week at Mission Hills in China. He said he shut down his game for two weeks after the Presidents Cup. This week will mark his first tournament action since he played the Tour Championship almost seven weeks ago.

“The rust is starting to come off a little bit,” he said.

If Woods wins this week, he will be credited for having as many European Tour titles as Lee Westwood (22), Ian Poulter (12) and Luke Donald (7) combined.

Woods, though, actually dominates in money won in European Tour sanctioned events. Woods has won 45,153,187 euros in his career.

This week, Woods looks to pad those numbers and add to his European Tour success.