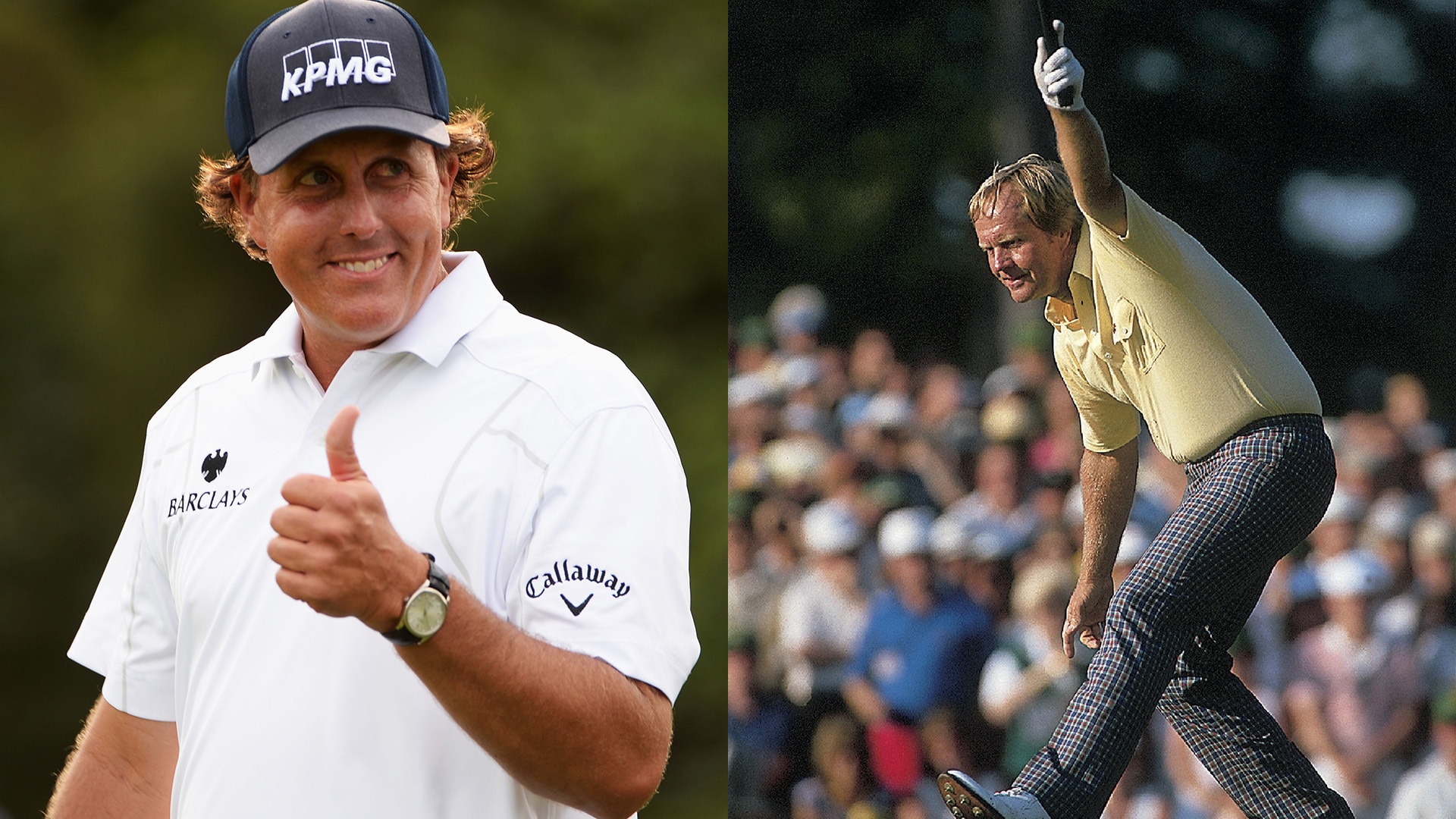 AUGUSTA, Ga. Phil Mickelson knows his golf history. He’s been a part of much of it the last 2 ½ decades since turning pro, just don’t try to tell him his competitive chances are history at Augusta National.

Mickelson was 15 when Jack Nicklaus set the standard for ageless excellence at the 1986 Masters, a high school phenom known only in San Diego circles with boundless potential and even more confidence.

“I VCR’ed it,” Mickelson said of the ’86 Masters in a light-hearted nod to a bygone era. “Many don't even know what that was, but I taped it and watched it over and over and just marveled at what it was. It was just incredible. It was one of the greatest moments in the history of the game.”

He watched the Golden Bear turn back the clock on the hallowed grounds and become the oldest Masters champion at 46 years, two months and 23 days. And, yes, Mickelson knows that when the final putt drops on Sunday this year he will be 46 years, nine months and 23 days old.

That’s where the comparisons end for Lefty.

Although he appreciates the historical significance, Mickelson isn’t willing to put a victory this week in a similar category. In ’86, Nicklaus’ victory was widely unexpected, with the game’s greatest two years removed from his last Tour victory and many figured the Golden Bear was well into his twilight years.

But the current version of Mickelson doesn’t see himself in the same light.

After a relatively pedestrian 2016, Lefty has been solid if not spectacular in ’17 with top-10 finishes in two of his last three starts, both of which were World Golf Championships. He also finished second to Henrik Stenson at last year’s Open in what may have been the season’s best duel.

He will tell anyone willing to listen that he’s in the best shape of his life and under the guidance of swing coach Andrew Getson he’s turned one of his greatest liabilities, his driving, into an asset.

Mickelson also begins his 25th Masters with a distinctly optimistic mindset, which is no surprise given his history around Augusta National.

There was a time when a Sunday leaderboard without Mickelson’s name on it was an anomaly, with Lefty finishing in the top 10 at the Masters 13 times in a 16-year stretch starting in 1995.

The foliage, the mystique, the history of the place has a tendency of turning him into golf’s version of Benjamin Button.

“For a golfer who plays golf for a living, who loves the game, I can't think of a place that you would want to win at and be a part of the history more than Augusta National,” he beamed. “For somebody like myself who grew up dreaming of this tournament, dreaming of winning here, to actually do it, still feels like a dream.”

Mickelson first played the Masters in 1991 after winning the U.S. Amateur the previous summer. He remembered setting up a practice round with Arnold Palmer and walking the course with the King. His mind drifts back to that Tuesday when his love affair began with the iconic course the way it normally does with men of a certain age.

“Those are moments that I'll cherish,” he said. “I'm kind of the youngest generation that was able to spend enough time with him.”

But Mickelson quickly snapped back to the here and now and launched into a lengthy explanation of why he likes his chances this week, not despite his age but because of it.

“I don't think much about age right now,” Mickelson said. “I think that guys' careers are being extended a lot longer because of the way fitness has taken over. It's not like I'm a pillar of fitness, but I spend a decent enough time in the gym to be able to physically perform and practice and play the way I'd like to play.”

If Mickelson were to claim his fourth green jacket this week it would make him the oldest Masters champion. It would be historic and put Mickelson in the same conversation as Nicklaus when future generations talk of the event’s greatest winners. Unlike Nicklaus in ’86, however, this wouldn’t hold the same cachet, at least for Lefty. He may be older then Nicklaus was in ’86, but competitively he feels much younger.