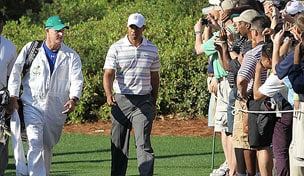 Getty Images
CHASKA, MN - AUGUST 16: Tiger Woods plays his second shot on the 18th hole during the final round of the 91st PGA Championship at Hazeltine National Golf Club on August 16, 2009 in Chaska, Minnesota. (Photo by Stuart Franklin/Getty Images)  -

The “talk” is never easy, however abbreviated the relationship.

We’ve all seen this transcript, it’s not you, it’s me. We can still be friends. There’ll be other caddies. But all that likely did little to soothe Dustin Johnson’s rattled psyche late Sunday in the plush East Lake locker room when caddie Joe LaCava informed him he was moving on to a bigger bag. The biggest bag in the game, to be accurate, but even that probably did little to ease the blow.

“Needless to say, Dustin and I were completely surprised, as they have enjoyed a great relationship and have been very successful together,” Johnson’s manager David Winkle with Hambric Sports Management said in a release.

The golf world is abuzz today with talk about a perceived lack of chemistry between Johnson and LaCava, but last month’s victory at The Barclays suggests the two were compatible enough. Let the record show that since the two began working together at The Players Championship, Johnson has posted three top-5 finishes and missed just one cut.

But this isn’t about irreconcilable differences or bad timing or even career advancement. Regardless of Woods’ current swoon he is still the player with the most major championship “upside” this side of Jack Nicklaus. It’s impossible to begrudge anyone that bag.

No, this is about locker room etiquette, about doing the right thing instead of taking the easy out, about taking the high road instead of the path of least resistance.

What exactly transpired in the weeks leading up to the Johnson and LaCava’s split will likely remain a well-guarded secret. It always is within the confines of Camp Tiger, but this much is certain – Woods did not contact Johnson until after LaCava had given his man the pink slip.

“(Woods’ manager Mark Steinberg) and I were approached by a lot of people, including Joe, who expressed an interest in becoming my caddie,” said Woods, who begins the LaCava era next week at the Frys.com Open.

“This was an important decision, and I wanted to think about it carefully. Also, out of deference for the FedEx Cup playoffs, I decided to wait until they were concluding to have substantive talks. We then spoke to Joe and came to an agreement.”

According to sources familiar with the situation LaCava did “reach out” to Woods but only after he learned he was being considered. More importantly, Woods did not contact Johnson before he began “substantive talks” with LaCava. There is no rulebook on caddie swapping, but as a general guide it is customary for a player in Woods’ position to approach Johnson about the possibility.

“My guess is Tiger just asked Joe with (Fred Couples’) input or help. In the end, caddies and players have to do what’s best for themselves,” said one Tour player. “Sometimes feelings get hurt. But I do think out of respect for a top player in the game Tiger should have given DJ a call.”

It’s worth noting, the same player pointed out that any caddie would jump at the chance to work for Woods, “Hell, I’d caddie for him,” he said. And there is certainly no faulting LaCava for either the move or the timing.

But the consensus across Tour lines was rather clear on this front. This isn’t about asking for permission, this is about common courtesy and a gentleman’s game.

“I would think he probably did call him or have (Steinberg) call him,” said another Tour type. “If not I’d be kind of surprised.”

If one needed a case study on how such matters should be handled look no further than LaCava’s split with Couples’ earlier this year. After two decades with one of the game’s most charismatic and popular players, LaCava moved slowly, some would say even sluggishly, to the conclusion that he and Johnson were a natural fit.

Even then, the veteran looper only made the move after Couples urged him to do so, and only after Johnson’s camp had cleared the switch with Couples. It seems simple, clerical even, but when it comes to the delicate balance of the player-caddie relationship it’s the only way.

It’s become good sport to shoot first and ask questions later when it comes to Woods in the post-November 2009 world, and given his close relationship with both LaCava and Couples the move has a low-hanging-fruit feel to it. But there is no denying that along the way Woods missed some steps.

It’s an even more curious outcome considering Woods’ split with his longtime caddie Stevie Williams this year. By some accounts, Williams’ moonlighting on Adam Scott’s bag was the tipping point in the relationship. Although he’d asked for Woods’ permission to do so, it seems the New Zealander had simply ran through too many stop signs.

On this it seems Woods suffered a similar faux pas that won’t easily be fixed. The world is eagerly awaiting a Woods-Scott duel filled with juicy subtext at November’s Presidents Cup. Just a hunch, be we’ve got about as much chance of seeing that soap opera as we do a Woods-Johnson pairing at Royal Melbourne?