No fine for Peterson after Happy Gilmore swing 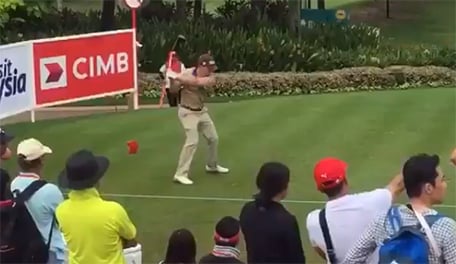 ST. SIMONS ISLAND, Ga. – Turns out there are times when the PGA Tour has a sense of humor.

John Peterson’s “Happy Gilmore” tee shot to begin his final round earlier this month at the CIMB Classic did not result in a fine from the Tour, Peterson confirmed Monday at the RSM Classic.

“I spoke with [Andy Pazder, the Tour’s executive vice president and chief of operations] twice and explained I was just trying to get 20 more yards [out of the tee shot],” Peterson said.

Let it be known if you Gilmore it off the first on Sunday you shoot 6 under. @drewsteckel pic.twitter.com/eFjaVxWdVe

Although the drive in question found a water hazard, Peterson said he practices the unorthodox swing often and even tried it during a junior event when he was younger.

“My mom pulled me off the course after that,” he smiled.

Peterson said his first tee shot on Sunday in Malaysia was the only time he attempted the Gilmore swing, but added that he should have kept doing it.

Although the swing didn’t prompt the Tour to issue a fine, he had a plan if it did.

“I was going to start a GoFundMe page,” he laughed. “I bet it would have worked.”