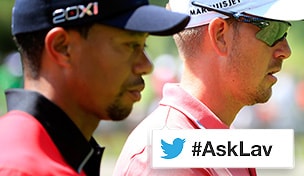 It’s not unusual to hear Tour types grouse about the far-flung schedule, or the lack of an off-season, or the scarce opportunities for the circuit’s middle class.

One complaint you’ll never hear? That there’s too much money in pro golf.

So, as you begin your shopping this holiday season, consider this little nugget:

If Henrik Stenson wins this week in Dubai, he’ll bump his season earnings on the PGA and European Tours to just south of $20 MILLION, including season-ending bonus money.

And – absurd alert! – that wouldn’t even be the most all time.

Twice Tiger Woods has banked more money in a season than Stenson when combining those two tours and the bonus bucks, crossing the $20 million threshold in both 2007 and ’09. Last year, Rory McIlroy raked in nearly $15 million combined, then parlayed that dream season into a nine-figure deal with Nike.

What does all this mean? Drinks are on Hennie Stennie for, oh, the next 50 years.

Now, your questions in this week’s #AskLav mailbag:

@RyanLavnerGC Is todays Prize Money that top golfers earn getting out of control.Personally I believe it is.

What a logical transition! Indeed, it’s been a popular conservation topic this week, perhaps because it was reported that six-time bridesmaid Briny Baird crossed the $13 million (!) mark in career earnings with his T-2 at Sea Island. That puts him 100th all time on the PGA Tour’s career money list, which is awfully elite company for a player with a P.F. Chang’s hat, unorthodox putting stance and just 31 career top 10s to his credit.

But this is the fat-pocket existence that the pros enjoy, thanks, in large part, to Tiger. Inflated purses make golf no different than any other big-time sport, and fans likely care little whether the pros are playing for $60,000, $600,000 or $6 million. It becomes a detriment to the sport, however, when talented players become more interested in earning a plump paycheck than hoisting hardware. Earlier this season, I asked a still-winless Tour pro whether a few close calls had dented his confidence. “Not at all,” he told me, “because on Monday morning, I still like looking into my bank account and seeing a few more zeroes.” In an era when even limited-field fall events boast a $1.5 million first-place prize, hey, who can blame some players for their fat-cat mentality?

@RyanLavnerGC If the Royal Wedding is the Masters, your guest list was equivalent to the field at what #PGATOUR event? #AskLav

May I be so bold as to suggest the Waste Management Phoenix Open? Consider the parallels: A few A-list stars in attendance, a lot of hungry up-and-comers and grizzled veterans, plenty of booze to go around. But, you know, considering it was held opposite the Georgia-Florida game, perhaps a better comparison is the Puerto Rico Open. Sigh.

Well, I’d like to think that it hasn’t. I’m still Ryan Tyrel Lavner; still Mr. #AskLav. I still go to bed at a reasonable hour. I still wear my tattered slippers around the house. I still devote far too much time to my fantasy football team. I still have to fold my clothes and take out the garbage and watch HGTV under a pink blanket. Seriously, 12 days later, the only thing different is that I now find myself constantly fidgeting with a wedding band.

When healthy, Patrick Cantlay is likely the best in the 2013-14 rookie class, though he’s still recovering from a hairline fracture in his L5 vertebrae. His priority ranking will take a hit with no starts in the early going, but the former No. 1-ranked amateur certainly has the potential to string together a season of high finishes and earn ROY honors.

How about Zzzzz? Too harsh, I know, but it’s been a sleepy start to the 2013-14 campaign, not least for a player like Brian Gay, who has followed the Tour schedule and played the last four weeks in four different countries. The wraparound schedule has largely served its purpose, though, giving a head start to most anyone who wants it. (Well, except you, Nos. 40-50 on the list of graduates.) Though there have been a few big-name winners – most notably Dustin Johnson (HSBC) and Webb Simpson (Vegas) – sorry, my mental calendar has already flipped to January.

Can the Bulldogs? Sure. Any SEC team, especially one with Georgia’s immense talent, can give the Tigers a game. Will they? Oh, an entirely different story. A still banged-up group, on the road, against the No. 9 team in the country, with little to play for but state pride and a slight upgrade in bowl choices? Take Auburn and the points (3).