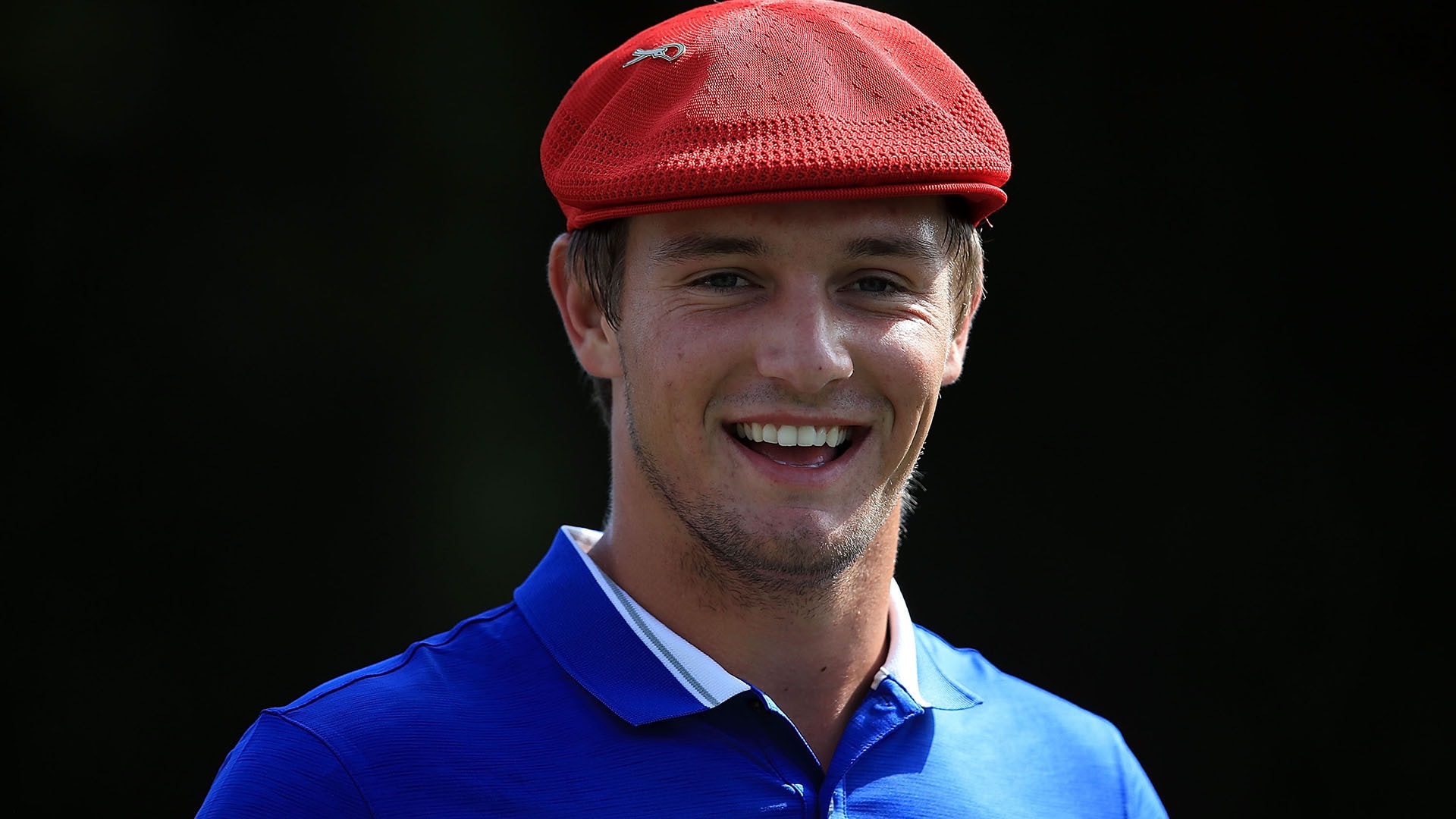 The intern has one final task before his big promotion.

Over the past six months, Bryson DeChambeau has dropped out of school, intrigued pros from Argentina to Australia, and devoured Augusta National during marathon practice sessions. Having faced skepticism for years because of his quirky approach, DeChambeau’s worldwide apprenticeship has been so convincing that Vegas installed the 22-year-old amateur at 200-1 for next week’s Masters – or the same odds as 2012 U.S. Open champion Webb Simpson, six-time PGA Tour winner Hunter Mahan and Georgia resident Chris Kirk.

Ryan Moore’s tie for 13th at the 2005 Masters remains the standard by which all recent amateurs are measured. Though DeChambeau and his team don’t set goals – or at least don’t publicize them – it’s easy to decipher their expectations.

“You’ll never hear him say that his goal is to win,” said Mike Schy, DeChambeau’s longtime swing coach, “but his whole view is preparing to win. In his mind, if he doesn’t prepare 100 percent, that’s a true failure.”

DeChambeau’s transformation from curiosity to can’t-miss star was a recent development. The kid from Clovis, Calif., has always done things his own way. When DeChambeau was 15, Schy introduced him to “The Golfing Machine,” a teaching manual that allows a player to build his own swing with 24 different components and 144 variations. That appealed to DeChambeau’s analytical mind, and eventually he chose component 7 and variation A – a one-plane action originally designed for chipping that he adapted to the full swing. But that was only the beginning. To make his swing work, he crunched the numbers and concluded that he needed single-length irons.

“Most people say I’m the smart scientist,” he said, “and I don’t know if I’m truly that. I’m more of a good experimenter.”

But when he debuted his new set and swing in 2011, DeChambeau recalled, “people said, ‘This dude is crazy. He’s a nut job. He’s got no chance.’”

One of college golf’s most consistent performers, the SMU junior finally broke through last June at the NCAA Championship, a watershed victory that validated his unorthodox methods. Three months later, he steamrolled the field at the U.S. Amateur, becoming only the fifth player in history to win the NCAAs and U.S. Am in the same year. His game even traveled overseas, as he was one of the lone bright spots during an American loss at an away Walker Cup.

A nut job? Not anymore. Now, he was an innovator, a potentially transcendent figure who hoped to “revolutionize the game of golf in a unique way.”

What happened next was a blessing for his long-term prospects: Last October, the NCAA banned SMU from postseason play for one year after it uncovered recruiting and ethical violations by former head coach Josh Gregory.

It was already going to be a demanding year for DeChambeau. Last spring, Schy received two or three phone calls a week from his prized pupil as he left the library at 1 a.m. The physics major tried explaining what he was studying, but mostly he just wanted someone to talk to so he wouldn’t fall asleep on the drive back to his apartment. Even before the NCAA sanctions, DeChambeau was concerned about how he would balance his full course load to graduate, his role as the Mustangs’ leader and his preparations for the Masters. Ultimately, he chose to leave school but remain an amateur, at least through the year’s first major.

“I had two paths,” DeChambeau said, “and (the ban) made it real clear. It wasn’t the ultimate reason, I can tell you that, but it definitely helped push me in a certain direction.”

Freed up, DeChambeau embarked on an ambitious schedule of international pro events to test his game, a run that saw him travel from Argentina to Australia to Abu Dhabi to Qatar to Dubai. He downplayed the past six months as an “internship,” as an opportunity to learn from the game’s best about how to travel, what to eat and how to prepare for tournaments. But he proved a quick study, making the cut in six of those seven events, including a tie for second at the Australian Masters. He will make his much-anticipated pro debut April 14 at the RBC Heritage.

“It’s almost like taking my rookie year out,” he said.

Earlier this year, in Abu Dhabi, Rory McIlroy couldn't resist taking a peek inside DeChambeau’s bag, trying out his custom-made, 37 1/2-inch Edel irons on the range before concluding, “He’s much smarter than I am.” When they played together in the third round that week, DeChambeau blew up with a Saturday 78 and plummeted out of contention. But it was a different story two months later at the Arnold Palmer Invitational. Paired on the final day, DeChambeau matched McIlroy shot for shot, eventually tying him with a closing 66 after three-putting the final green.

“If you keep playing like this,” McIlroy told him afterward, “I’ll be seeing a lot more of you.”

But it’s not DeChambeau’s game that makes him unique. There are, quite literally, dozens of promising amateurs who are tearing up the college game, who are hungry, fearless and impatient. What separates DeChambeau is his look (Hogan-style cap, swing and clubs) his demeanor (exceedingly polite, but also supremely confident) and his approach, which is rooted in science and applied with creativity.

During a recent news conference at Bay Hill, DeChambeau discussed a wide array of topics, everything from why he isn’t afraid to fail (even citing Thomas Edison!) to the efficiencies of motion based on a person’s body type to the physics behind his golf clubs. (“I understood that if I was to swing one inch shorter, the head weight would need to be about 10 to 11 grams heavier to correlate to equal about the same force,” he said.) At the end of DeChambeau’s session, the PGA Tour media official on hand cracked, “Bryson, thank you. It’s been extremely educational for all of us.”

But on the course, DeChambeau isn’t bogged down by numbers or science. There is an artistic quality to his game, as well, as he’s a master shot-shaper with an ability to hit two drives: the “control” drive, with a 112-mph swing speed, and the big swing that tops out at 127. Off the course, he has been known to spend his precious free time creating a stippling drawing of Ben Hogan; practicing signing his name in cursive, left-handed and upside down; and soaking his golf balls in Epsom salt to determine how many are out of balance.

Sure, these are unusual hobbies for a 22-year-old who should be on the verge of college graduation, but his intelligence blended with a relentless work ethic produces undeniably great results.

“He’s really bright, very confident in his own way of doing things,” said defending Masters champion and fellow Dallas resident Jordan Spieth, “which is important and I think will get him and keep him on the next level.”

DeChambeau, the reigning U.S. Amateur winner, will play the first two rounds next week with Spieth – a prime opportunity to put his exhaustive preparation on display. After first touring Augusta National in mid-December, DeChambeau has now played a total of eight rounds there. Two weeks ago, after his final tune-up at Bay Hill, he made his last scouting trip to Georgia, using the remainder of his five days that invitees are allowed to play alone while accompanied by a guest.

During practice rounds at Augusta, DeChambeau and Schy meticulously charted the greens, factoring in the percentage of slope, length of putt and speed. DeChambeau reached out to Phil Mickelson about what he can expect come tournament week. He lined up a practice round on Sunday with Ben Crenshaw. And he even spent two hours with CBS Sports announcer Jim Nantz, borrowing DVDs of recent Masters so he could study hole locations, par-5 layup areas and subtle breaks on the greens.

“I think of him as a land surveyor,” Schy said. “This is about him understanding the nuances of elevation changes and contours of the green and how the greens respond to different angles of approach. That’s the science part; charting the golf course is like a surveyor’s map. He wants to know all of the nuances of the golf course as much as possible. It’s not being over-analytical – it’s being prepared. And when he is, it allows his creative side to come out.”

And so this is the intern’s final assignment, the week he’s been building toward, the moment when he puts the countless hours he’s devoted at Augusta into action on golf’s biggest stage, when the scientist gives way to the artist. 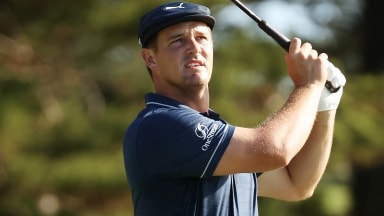