Hovland finally puts 'it' all together for U.S. Am title 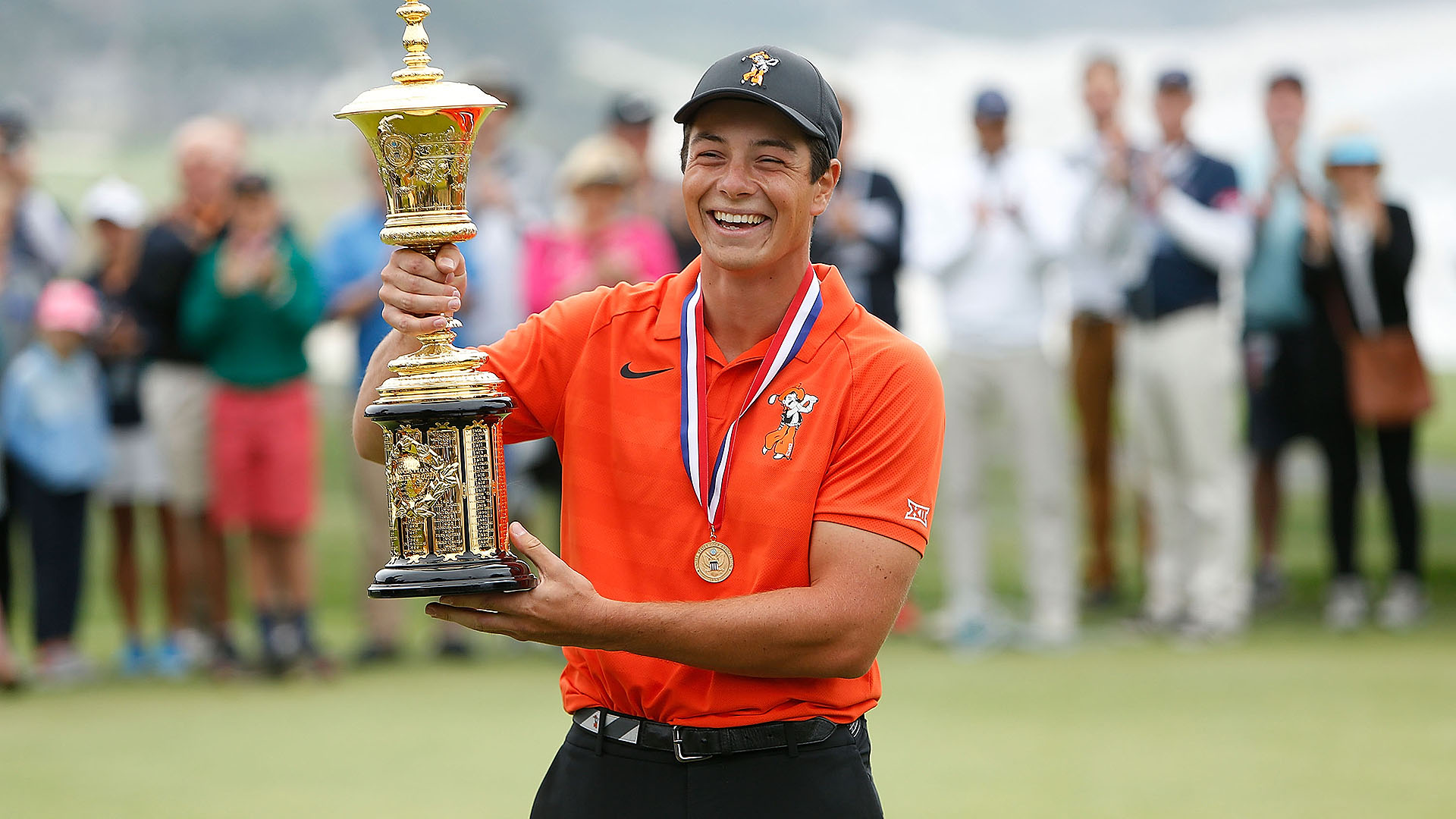 PEBBLE BEACH, Calif. – Viktor Hovland had more than an hour to decompress and regroup for the afternoon session of the 36-hole final at the 118th U.S. Amateur. During that downtime, he scrolled on his phone for 20 minutes, uninterrupted, before he finally headed toward the buffet line in The Lodge.

Every college kid is glued to his iPhone, of course, but Hovland wasn’t replying to texts or sifting through his Twitter mentions or checking out Snapchat.

He was reading a philosophical debate about affirmative action.

“He’s constantly on his phone, reading articles, gaining knowledge, and there have been times this year that it’s 20 minutes before his tee time and he hasn’t warmed up yet, so we’re thinking, ‘Is Viktor going to warm up today or is he going to roll out there cold?’” said Oklahoma State assistant coach Donnie Darr. “He would go to the range, literally hit 10 to 12 balls and off to the first tee he’d go. He knows what he’s working on – he’s not down there searching.”

With one last commanding performance at Pebble Beach, he capped a near-perfect week by defeating Devon Bling, 6 and 5, to win the U.S. Amateur.

The new Prince of Pebble’s dominance this week was astounding.

The fifth-ranked amateur in the world, Hovland never trailed during his final 86 holes and was 1 down only once in six matches. His 104 total holes tied the fewest played by a U.S. Amateur champion since 1979.

You’d never have known it was just the Norwegian’s second career victory – at any level.

“It wasn’t anything flashy,” he said afterward, “but this week it all came together, which is really cool.”

His championship match against the 302nd-ranked Bling wasn’t flawless, but he also didn’t need to be.

Hovland so thoroughly trounced his opponents this week that he played 15 fewer holes than Bling, a sophomore at UCLA. In front of a few dozen family and friends, Bling played the best round of his life in the semifinals, but he was 5 over par during the morning 18 Sunday and managed only one non-par 5 birdie all day.

Hovland led outright for all but two holes, taking the lead for good after the signature shot of the championship. On the fourth hole, he blasted his tee shot over the cliff, into an ice plant. After sliding down the embankment to reach his ball, he saw it sitting perfectly.

“It was a hit-and-hope moment,” he said, “and it ended up pretty sweet.”

Hovland chopped out to 3 feet, the unlikely birdie jump-starting his day. He took a 4-up lead into the intermission and never came close to surrendering that advantage during the afternoon.

His eventual 6-and-5 decision was the second-largest margin of victory since 2010.

“He’s been on a steady rise,” said Bratton, who caddied for Hovland this week, “and I can’t wait to see where he goes from here.”

Bratton was also on the bag for the 2010 U.S. Amateur champion at Chambers Bay. But unlike Peter Uihlein, the top amateur who wanted to play for the top program, Hovland was an underrated addition in Stillwater.

In the summer of 2013, Bratton took a trip to Scotland to watch one of his prized recruits, Kristoffer Ventura, at the European Boys Championship. While there Bratton watched the rest of the Norwegian national team practice, and the newest and youngest member of that squad stood out.

“I promise you I know what good is when I see it,” Bratton said, “and Viktor was good.”

Still, Hovland never won outside of Norway – a common theme, until recently – and was lightly recruited through his senior year of high school, only receiving interest from Texas Tech, TCU, Tennessee and Bratton’s Oklahoma State program. Though many of his friends chose the pro route, Hovland was dead set on college. “I just didn’t think I was good enough for the pros,” he said.

During recruiting, Hovland would talk on the phone with Bratton for hours, about almost everything – TV shows, politics, philosophy. He devours podcasts. He’s an ardent movie critic. He extensively researches and then welcomes a debate on the day’s hottest topics.

Even without any tournament titles on Hovland’s résumé, Bratton was so smitten that he didn’t bother to bring in another recruit for the class of 2016. He was all-in, with no backup option, and Hovland visited the campus for the first time a week before signing day his senior year.

The gamble paid off.

Hovland closed out his freshman season with five consecutive top-10s and earned first-team All-Big 12 honors, but as a sophomore he truly became an elite player.

During his freshman year his swing was too shallow and he struggled to get the ball airborne. At OSU’s event at Southern Highlands in Las Vegas, Hovland bubbled with frustration when he couldn’t stop his shots on the firm greens.

He finally had enough last fall, when he flew to South Florida to see his swing coach, Denny Lucas, for three days over the Thanksgiving break. They worked to get Hovland more into his left side at impact and compress the ball.

The difference was significant and immediate. He won his first college tournament in the spring, only once placed outside the top 25 in an event and became a first-team All-American. He also saved his best for the biggest stages, leading off the Cowboys in match play and going a perfect 3-0 as they cruised to the NCAA title.

“Prior to that he got a lot out of that because his mis-hits were so good, but his good shots are way better now,” Darr said. “His ball flight is higher, so he’s more versatile as a player. He can hit it farther and hit it both ways. I think you’re going to see he’s going to win a lot of tournaments moving forward.”

This summer, Hovland reached the Round of 16 at the British Amateur and tied for second at the European Amateur before his resounding performance here at Pebble Beach. He’s the first player since Florida’s Bubba Dickerson (2001) to be part of a NCAA title team and win the U.S. Amateur in the same year.

“I always thought I had a pretty good vocabulary,” Hovland said, “but I’m at a loss for words. It’s really special. I just hope it’s the start of something great.” 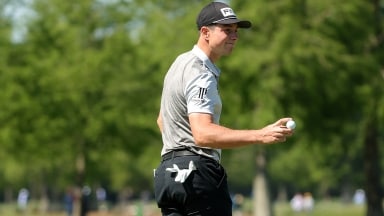 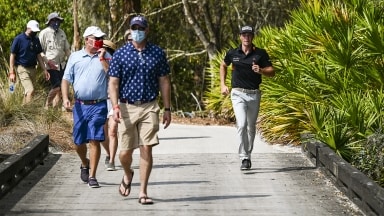 Watch (or don't): Hovland caps round with quad

Viktor Hovland was bogey-free and 7 under through 17 holes Friday at Concession before closing with a quadruple bogey. 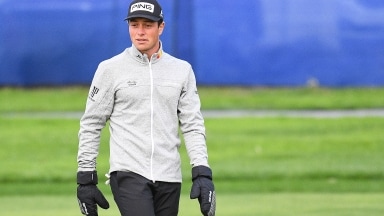 Viktor Hovland birdied his final hole for a 7-under 65 on Torrey Pines’ South Course on a rainy, miserable Friday, giving him a one-shot lead.