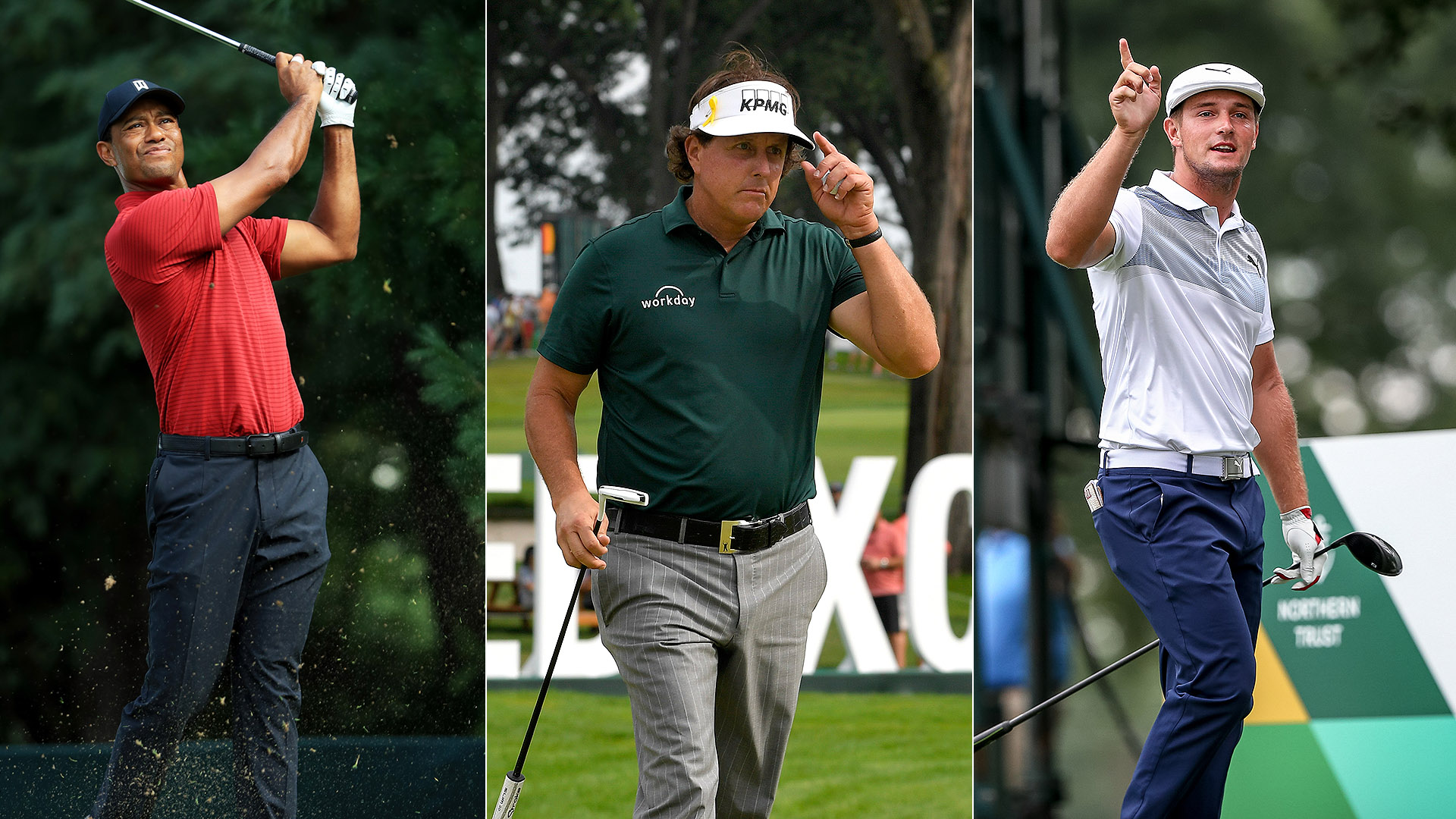 The Year of Bryson is about to get even more interesting.

DeChambeau, inarguably one of the game’s most interesting cats, took another huge step in his career Sunday by winning The Northern Trust by four shots over the top players in the FedExCup.

This win accomplished two things: 1.) It gives him the inside track for the season-long title, bumping three-time winner Dustin Johnson out of the No. 1 spot; and it 2.) Virtually guarantees that he’ll be on the U.S. Ryder Cup team, after finishing ninth in the automatic points race.

Who will partner with him?

Can he keep it together on the biggest stage of his life?

It’ll be fascinating – again – to watch him work in Paris.

1. Laugh at DeChambeau’s eccentricities all you want … but you can’t deny that he’s a special talent.

There are four players in history who have won a NCAA title, a U.S. Amateur and three Tour events before turning 25:

2. So DeChambeau will be on the U.S. Ryder Cup team. He has to be. He finished 218 points behind Webb Simpson for the eighth and final automatic spot, and then he went out and won a playoff event. It’s a done deal.

When considering potential partners, why not Woods? Both Bridgestone endorsers, they’ve played numerous practice rounds together this season, and Woods not only is intrigued by the kid’s way of playing, but he’s clearly a believer or he wouldn’t waste his time. On Sunday, Woods praised DeChambeau for his intelligence, fieriness and competitiveness.

“We want guys that are like that on this team,” he said. “I think he would be a great Ryder Cup partner for anyone.”

Woods would be an ideal partner for DeChambeau. So would a calming presence like Rickie Fowler (also a Puma endorser) or Webb Simpson.

DeChambeau has a strong match-play history – when he won his U.S. Amateur title, in 2015 at Olympia Fields, he was 19 under par (including the usual match-play concessions) and hammered his finals opponent, 7 and 6 – and he's a lot easier to partner with than, say, Bubba Watson.

3. The final round at Ridgewood was a snoozer, but at least the race for world No. 1 provided just a sliver of late-afternoon entertainment.

Dustin Johnson came home in 33 (making par on the last four holes) to stay in front of Brooks Koepka by the slimmest of margins.

Heading into the second playoff event, the top of the world rankings look like this:

After making the cut on the number at The Northern Trust, Woods continued to putt like he was blindfolded. Of the 80 players who made the cut, he finished 79th in strokes gained: putting, spoiling an otherwise stellar ball-striking week in which he was top 17 off the tee, approach the green and tee to green.

With the tie for 40th at Ridgewood, Woods dropped from 20th to 25th in points. The top 30 in the standings after the third leg of the playoffs reach the Tour Championship, so there is still work to do.

5. After a stirring performance at the PGA, Woods took 120 putts over four days in New Jersey – his second-worst performance of the season, behind the 126 putts he needed at Quail Hollow. He missed 21 putts inside 15 feet.

It's ironic that his two worst weeks with the putter have coincided with his two best driving weeks.

It’s too early for a call to the bullpen – after all, he nearly won two majors in the past month – but after a few months in timeout, Tiger’s trusty Scotty should at least begin warming up.

6. The $9 million Match between two aging warriors won’t be played for another three months, but if we’re being honest … well, we’re already kinda over it.

Over the carefully coordinated buddy-buddy time over the past few months. Over the G-rated smack talk. Over the pay-per-view model.

Not everyone was on board with this idea from the start, either because this should have happened 15 years ago, when the two superstars genuinely disliked each other, or because they’re not putting up their own cheddar. But then those running the show created an even greater divide by announcing that it’ll be on PPV (the amount has not yet been disclosed), though Woods casually dismissed those concerns by saying, “I think (fans) can afford it.”

The point is that no one should have to pay to watch this 18-hole pillow fight, whether it’s going for $4.99 or $49. Why turn away viewers (particularly kids) when the headliners will still generate plenty of revenue through sponsorship?

7. The clock is ticking for Captain Furyk.

This is the last week before he needs to make three of his four captain’s picks for the upcoming matches in Paris.

Tiger and Phil are two of the picks. The third, now, will be Bryson.

So what to do with the last pick? A decision doesn’t need to be made now, or even next week – he has to announce the 12th man after the BMW in two weeks.

Tony Finau has had plenty of opportunities to audition. Though his only win remains the 2016 Puerto Rico Open, he’s been consistently solid this year, racking up a top-10 in each of the first three majors of the year. He played a practice round with a few team hopefuls at Le Golf National in July. He played the first three rounds at Bellerive with Furyk, where he tied the PGA record with 10 birdies in a round. Then he played the first two rounds at The Northern Trust with Mickelson, who had this to say afterward when asked what Finau could bring to the team: “A ton, because not only is he a great player, he’s a solid guy. He’s one of my favorite guys to be around.”

Even as another rookie, Finau deserves that spot more than the other players in contention, but there's an unsettling feeling that Furyk may want to cover himself and opt for an experienced plodder like Matt Kuchar.

8. Thomas Bjorn’s choices are narrowing, too.

After Paul Casey's rough end to the final round, it’s now clear that Ian Poulter, Rafa Cabrera Bello and Casey cannot qualify for the European Ryder Cup team unless they sign up for this week’s European Tour event in Denmark. Thorbjorn Olesen is in line for the final automatic spot.

Poulter is a lock for the team, as much as Tiger and Phil on the U.S. side. Casey will get the nod, as well, after rejoining the tour this year. Henrik Stenson seems a good bet, as well, barring another setback with his injured elbow.

And so that means Bjorn has to pick between such players as Bello, Russell Knox and Sergio Garcia.

In other words: Sergio.

The free-swinging 20-year-old became the first player since Jocelyne Bourassa in 1973 to win Canada’s national championship.

The victory was the seventh (!) of Henderson’s ascendant career, but this was easily the most special. She made four consecutive birdies on the back nine to turn the ending into a coronation that Canadian golf fans had waited more than a half-century to witness.

“It’s amazing, just surreal,” she said afterward. “The crowds have been amazing all week, and to finish it off the way I did is really a dream come true.”

Details of The Match have been rumored for nearly two months. So when it became time to announce that the generational bout is officially official, what happened?

They absolutely butchered the advertising.

That they didn’t have the actual date of the match – Friday, Nov. 23 – was bad enough PR.

But then they used a photo of Tiger wielding a left-handed driver!

This is not an easy mistake to make. Someone had to Photoshop the image, cut out Tiger’s driver and flip it. Then it had to pass through God-knows-how-many editors and executives over the past two months without someone – ANYONE – spotting the error.

Of course, it was noticed almost immediately on social media, because it is so glaringly obvious to anyone who has played golf, watched golf or ever seen a right-hander swing a club.

Major Shakeup Coming?: Tour Championship. The AP reported that the season finale could soon look completely different, that instead of having a points reset and various fluctuations during the course of the tournament, the FedExCup leader instead will receive a head start on the leaderboard – beginning the event at 10 under par, with the rest of the pursuers staggered behind him. No doubt, the ending to the season has occasionally been awkward, but a birdie-bogey swing on the first hole of a 72-hole tournament could potentially undo a season’s good work? This is just weird. Hard pass.

Well, That Was Unexpected: Padraig Harrington. In his last 20 starts, the Irishman never finished better than 36th and missed 12 cuts. Then he shot 20 under and finished second at the Czech Masters. Funny game.

Pro Golfers – They’re Just Like Us!: Tyrrell Hatton. Putting as poorly as anyone in the field at Ridgewood, Hatton apparently made a run to Golf Galaxy to pick up a new putter. On Sunday, he rolled in 130 feet worth of putts – or nearly as much as the first three rounds combined – and shot 64 to soar up the leaderboard.

Well that’s the best $172 I’ve ever spent
Was so nice to hole some putts again today, new putter worked it’s magic!
-7 64 to finish the week
Onto Boston! pic.twitter.com/PrTNv74bsw

See You in 2020?: William McGirt. Slated for hip surgery in a few weeks, McGirt is expected to miss all of the upcoming season. Kudos to him for battling all the way through the season, where he failed to advance to this week’s stop in Boston. “Can’t wait to play pain-free again,” he tweeted.

Underrated Tweet of the Week: Ian Poulter. This was the flashy Englishman’s message in January 2008: When I play to my full potential, “it will be just me and Tiger” in the world rankings. That never happened, of course – Poulter never rose higher than No. 5, in 2010 – but at least he had the sense to poke fun of himself when they were paired together during the third round of The Northern Trust.

Well tomorrow teeing off at 7.50 it’s “just Tiger and me” better get to sleep. pic.twitter.com/uW5vYmvDEr

OK, Maybe Not: Keegan Bradley. The long-ago major champ played his way into the final group with a Saturday 62. Then he went out in 42 (!!!) on Sunday, shot a miserable 78 and plummeted all the way to T-34. Yikes.

When Your AARP Application Gets Declined: John Peterson. For a guy who’s likely on his way out of the pro ranks, Peterson’s chili still runs plenty hot. He shot 9 over in the Web.com Tour Finals opener to miss the cut, and his Tour future is now down to three starts.

Always nice to see @JohnPetersonFW back in the competitive mode! pic.twitter.com/RHpfrElUv8

Blown Fantasy Pick of the Week: Francesco Molinari. The Open champion has finished outside the top 6 just TWICE since May … and so of course he missed the cut while shooting 2 over on a soft course that everybody was tearing up. Sigh.