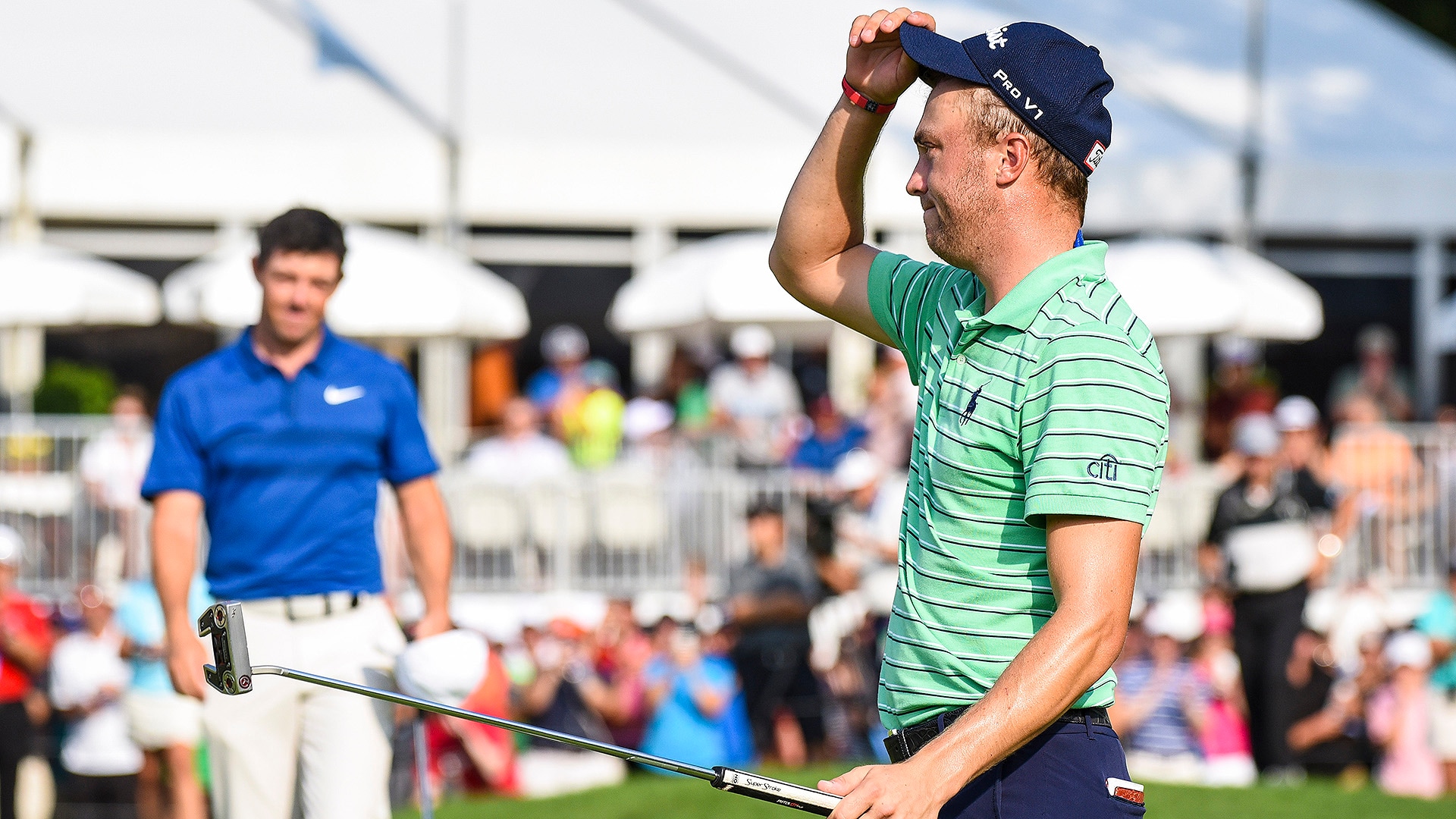 Remember that ridiculous storyline that Justin Thomas was stuck in Jordan Spieth’s shadow?

Now it’s worth debating whether it’ll be Thomas or Spieth, both 25, who will wind up with the better careers.

Thomas might trail by two in the major department (for now), but he did reach another milestone first – becoming the youngest player to win a major, a World Golf Championship and a FedExCup title.

It’s his ninth career win – Spieth has two more, but with a two-year head start on Tour – and eighth in the past two seasons. Viewed another way: Thomas has more Ws since the start of last season than Matt Kuchar has in his entire career (seven).

While Spieth has showed some of his frailties this season, Thomas has backed up his breakout, five-win campaign with another (at least) three-win season that included a WGC title, as well as a playoff loss in another WGC (Mexico) and a semifinal exit at the WGC-Match Play.

Now comes his title defense at the PGA – and another chance to prove that perhaps he’s the best player of this generation.

1. Thomas felt as though it’d been forever since he earned a title – and in our what-have-you-done-for-me-lately? sports culture, maybe it had been. He hadn’t won on Tour since beating Luke List in a playoff at the Honda Classic at the end of February.

Since then, he’d notched only a single top-10.

And so he gathered his team at the WGC-Bridgestone Invitational  to figure out what’s going on and what they can do differently.

He put together the most patient performance of his career, dusting Rory McIlroy, head to head, and coasting to a four-shot win against an elite field.

2. This one was particularly meaningful for Thomas.

It was the first time that his grandparents, Paul and Phyllis, were able to watch him win on Tour in person. Paul is a longtime PGA member, while Phyllis motored around Firestone in 90-degree heat with the aid of a walker.

And so when he was about to finish off his final round, he looked to the right of the green and spotted two generations – his parents, Mike and Jani, but also his grandparents.

“I just got a huge knot in my throat and I had to put my head down,” he said. “I’ve never gotten like that on the golf course before. You just don’t know if they’re ever going to see me win if I don’t win here. So it was pretty cool to get it done.”

3. The biggest surprise was how easy Thomas made it look compared to his chasers.

The final round featured more difficult conditions, with quicker, firmer greens and a stiffer breeze. But Thomas was seemingly the only one who could hold it together.

His playing competitor, McIlroy, played a six-hole stretch in 4 over around the turn. He shot 73.

Jason Day played his last six holes in 5 over.

Marc Leishman made four straight bogeys on the back nine and shot 74.

It added up to a Sunday snoozer.

4. At a place he’s won eight times, Tiger Woods played his last 30 holes in 6 over par and didn’t look very good doing it. He tied for 31st.

Woods dismissed questions about whether he was feeling OK, physically. “I’m fine,” he said, even if anyone watching, either in person or on TV, noticed that he was moving more cautiously. His swing speed continued to decline, too – it was 4 mph slower than Quail Hollow in May.

Woods looked lethargic and run down – forgivable for one week in a long season, but slightly troubling for a 42-year-old coming off major back surgery, playing his first full season in five years and with an upcoming stretch of important golf in which he’ll need to play six more times in a seven-week span.

Managing fatigue will be his biggest concern the rest of the year.

5. Woods finished the week ranked outside the top 45 (of 71) in strokes gained: off the tee, approach the green, around the green and tee to green. Stats like that don’t portend well for Bellerive, where he’ll need to ball-strike his way into contention.

6. Bellerive Country Club in St. Louis returns to the major-championship spotlight this week for the first time since 1992.

The course was supposed to host the 2001 WGC-American Express Championship, but the event was canceled because of the Sept. 11 terrorist attacks. In 2008, Camilo Villegas won the BMW Championship there at 15 under. The guys he beat, in order: Dudley Hart, Jim Furyk, Anthony Kim, Stephen Ames, K.J. Choi and D.J. Trahan.

So not much you can draw from there.

It’s a beefy track (topping out at almost 7,600 yards) that should yield plenty of birdies in the warm, humid conditions.

1. Dustin Johnson: The world No. 1 should be rolling heading into Bellerive after his 66-64 weekend at Firestone.
2. Justin Thomas: Conquered a track at which he’s previously struggled (Firestone), and now turns to a title defense with all parts clicking.
3. Rory McIlroy: Wilted alongside Thomas in Akron, but PGA setups are most conducive to his style of play.
4. Brooks Koepka: No weaknesses and seemingly always plays major tests well.
5. Jason Day: The best putter in the world. That usually works at majors.
6. Tommy Fleetwood: Would have challenged for the WGC title if not for a poor third round. He has three consecutive top 15s worldwide.
7. Justin Rose: Hoping his WD from Firestone was merely cautionary, with a test on deck. Arguably the most consistently good player in the world this year.
8. Rickie Fowler: Yep. We're falling for him again.
9. Tony Finau: Top-10s in all three majors this year, and a birdie-fest would suit him nicely.
10. Jordan Spieth: Felt wrong to leave him out of a top-10 list, though there’s plenty of reason for skepticism, from his continued shaky ball-striking to his final-round surprise at Carnoustie to his T-60 at Bridgestone to the external pressure of trying to capture the career Grand Slam.

8. The Ryder Cup picture will start to come into focus after this week’s PGA Championship. It’s the final week for a player to qualify on his own merit – and there could be plenty of volatility, with double points at stake.

The top 8 players after the PGA are automatically named to the team. Right now, Brooks Koepka, Dustin Johnson, Patrick Reed and Justin Thomas are the only players who have clinched their spot. Bubba Watson and Jordan Spieth are virtually guaranteed. Rickie Fowler and Webb Simpson have work to do to secure their spot in the top 8.

Of the challengers, Bryson DeChambeau and Phil Mickelson are the most intriguing. Even after a standout season, DeChambeau isn’t a shoe-in for a captain’s pick, while Mickelson could save captain Jim Furyk a pick if he qualifies on his own.

9. Georgia Hall sure made her first win as a pro count.

After an auspicious debut at the Solheim Cup, hopes were high for the 22-year-old English woman. A year later, she became the second Brit to win The Open since the event became a major in 2001.

Hall was named Georgia after Nick Faldo’s 1996 Masters victory. His final-round score that day, when he overtook a collapsing Greg Norman? A final-round 67.

What was Hall’s closing score at Royal Lytham. A 67, of course.

10. Hall held off a game Pornanong Phatlum for the title, and the leaderboard featured plenty of international flair. Interested observers needed to scroll all the way down to Jaye Marie Green, in a tie for 15th, to find the first American.

U.S. women now have gone 0-for-their-last-6 majors, and they’ve won just two of the last 18. It’s reasonable to wonder if it’ll get better any time soon.

Lexi Thompson is currently on a self-imposed break, after a difficult year and a half on and off the course. Michelle Wie withdrew from The Open because of wrist problems. Cristie Kerr is 40. Brittany Lincicome is too often a non-factor. Paula Creamer couldn’t even qualify for The Open.

And so it seems U-S-A’s best major hopes going forward are 2017 Women’s PGA champ Danielle Kang and Jessica Korda, the 25-year-old who has finished T-4 in a pair of 2018 majors. It helps, too, that both are dynamic personalities.

Other than that … the outlook is pretty bleak.

Phil Mickelson is totally comfortable in his own skin.

How else to describe what else we saw last week, when Mickelson moved and grooved his way to social-media fame with this Mizzen+Main ad?

To make an impact today, your ad needs to either be really good, or it needs to be SO bad that it’s good.

And this was bad. Really, really, intentionally bad – and it worked.

It's been just about the strangest year possible for Lefty.

Farewell: Firestone. And good riddance! If not for Woods’ dominance there, the South Course would be the most unmemorable track these guys play all year – a series of indistinguishable, 400-to-460-yard par 4s with trees lining both sides and bunkers fronting the greens. Yawn. But don’t worry, the WGC move to TPC Southwind will really spice things up – DJ won there this year by hitting lots of iron-wedge into the par 4s …

Horses for Courses?: JT. Or not. In two previous tours around Firestone, he hadn’t finished better than T-28. “I’m glad I finally played well around here, just in time to leave,” he said.

East Lake Bound?: Andrew Putnam. He won the Barracuda Championship, but it’s been a sneaky-good season. He lost to DJ in Memphis and also posted three other top-10 finishes. He’s now 31st in the FedExCup standings, needing one more solid week to ensure that he gets to the Tour Championship.

Case of the Mondays: John Oda. The former UNLV Monday qualified for the Reno event and tied for third – the best finish by a late entry this year. It’s also his second top-10 of the season (Mayakoba).

Turning Back the Clock: Ernie Els. His tie for third at the European Tour’s Fiji Invitational was his best worldwide finish in nearly five years.

Back in the Winner’s Circle: Oliver Wilson. A decade ago, he was a European Ryder Cupper. On Sunday, he won on the European Challenge Tour, in Sweden, as he continues to grind in hopes of making it back to the big leagues.

Hammer Time: Cole Hammer. He basically went wire to wire at the Western Amateur, co-medaling during the four-round stroke-play qualifier and then edging all four of his match-play opponents by a 1-up margin. Texas has had several impact players over the past few years – Jordan Spieth, Brandon Stone, Beau Hossler, Doug Ghim – and now comes Hammer, who will join the Longhorns this fall. Speaking of young ballers ...

Remember the Name: Akshay Bhatia. The 16-year-old left-hander from North Carolina (who apparently is looking to turn pro at 18 and not attend college) is making his presence felt at the junior level. Over the past year, he’s won the Junior PGA, the prestigious Sage Valley event, the AJGA Polo Junior and reached the finals of the U.S. Junior. He just defended his title at the Junior PGA by doing this:

Blown Fantasy Pick of the Week: Xander Schauffele. After a career-best major showing at The Open, the reigning PGA Tour Rookie of the Year backed up by … finishing 68th out of 71 players, following a closing 78. Momentum heading into the PGA, we think not. Sigh.