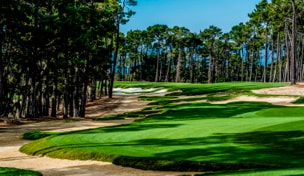 Getty Images
Sei Young Kim of South Korea celebrates after chipping in on the 18th green to force a playoff with Inbee Park (not pictured) during the final round of the LPGA LOTTE Championship Presented By Hershey at Ko Olina Golf Club on April 18, 2015 in Kapolei, Hawaii.  -

No one comes to Pebble Beach for the driving range, until possibly now. Just prior to the AT&T Pebble Beach National Pro-Am, the resort unveiled a new, 350-yard, double-sided driving range complete with a new golf academy. It's located across the street from the old driving range and is nearly twice the size of the old one with the ability to accommodate up to 85 golfers. Target greens were sculpted to mimic greens on Pebble Beach, and a new, 40,000-square-foot short game area is also brand new. A new golf academy, housed in a 3,000-square-foot building was also created to give Pebble Beach more exposure to the golf school and lessons business -- all something to think about should you snap hook a drive into Stillwater Cove on No. 18.

The new driving range is double-sided and features an enclosed, 3,000-square-foot teaching academy. (Photo by TGO)

Meanwhile, just down 17-mile drive, one of Pebble Beach's golf courses is about to reopen. Poppy Hills Golf Course, owned by the Northern California Golf Association and formerly on the course rotation of the AT&T, is scheduled to reopen on April 4th. The opening comes after closing in March of 2013 for a full renovation and reseeding of the course. The new Poppy Hills will play a lot different, favoring firm-and-fast conditions, and Robert Trent Jones Jr. redesigned the course to emulate this philosophy.

Poppy Hills was featured in a recent episode of In Play with Jimmy Roberts, which also described how nearby Pasatiempo Golf Club is dealing with dwindling water access along the northern California coastline.