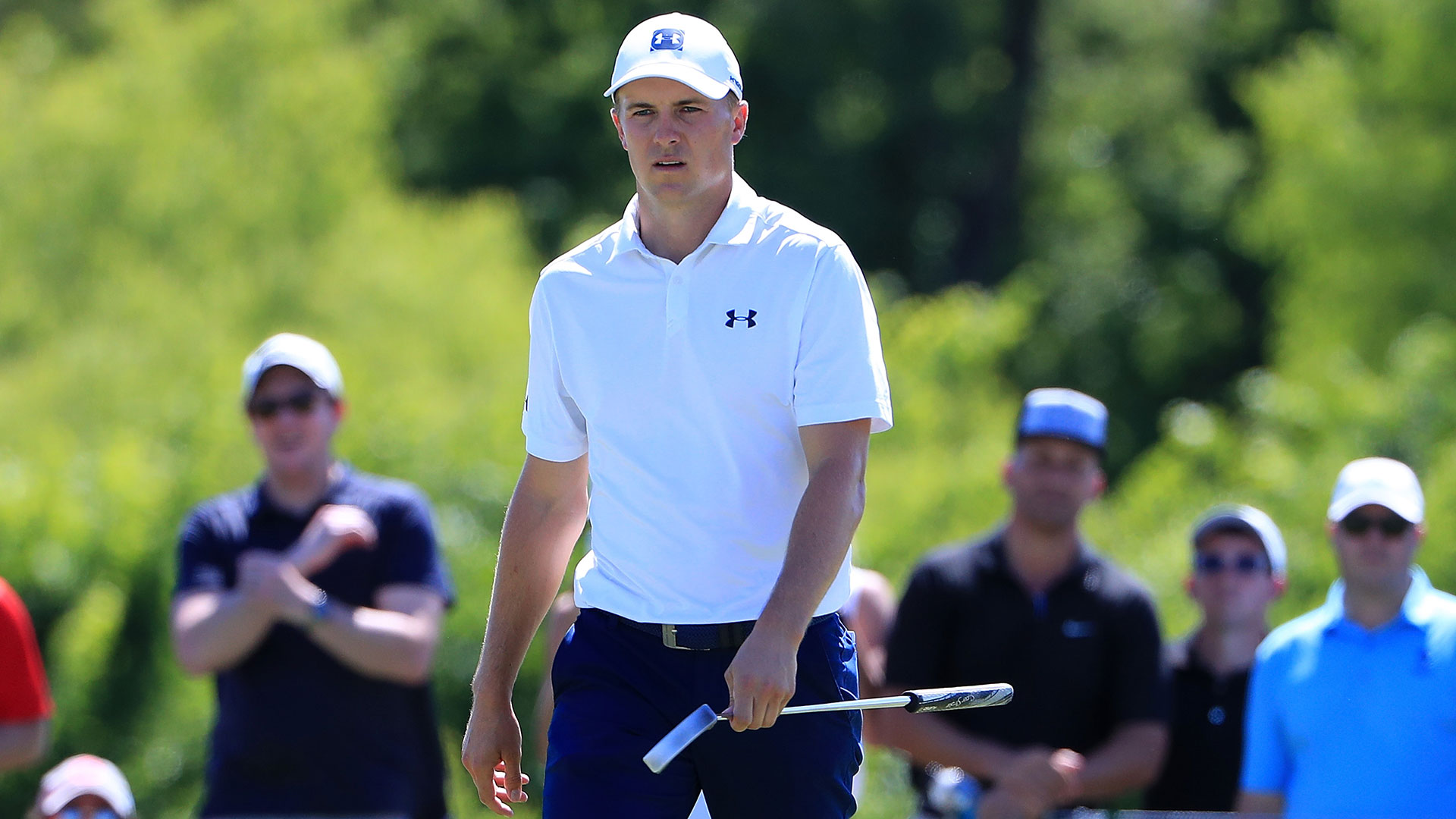 DALLAS – After exiting the scoring area following a frustrating performance, Jordan Spieth quickly turned back to his bag, ripped the headcover off his putter and grabbed a sleeve of Titleists.

If there were any lingering questions about the root cause of Spieth’s simmering emotions during the opening round of the AT&T Byron Nelson, they were answered by his decision to conduct a post-round interview with his Scotty Cameron tucked firmly under his right arm before heading to the practice green a few feet away.

“I didn’t putt well,” Spieth said. “I didn’t make anything. All the birdies I made were inside of 5 feet. Felt like I was hitting some decent shots, just weren’t going in.”

Continuing what seems to be a common theme in 2018, Spieth’s 2-under 69 at Trinity Forest would have been far lower had his putter remotely cooperated. A steamy afternoon in the Texas heat went south on the short par-4 fifth hole, when Spieth drove the green only to putt his ball off the green from more than 80 feet. Afforded an eagle opportunity, he instead left with a four-putt bogey.

He also opened his round with a three-putt par on the first hole, and his 10-foot par save on No. 3 proved to be his longest make by a wide margin. After entering the week ranked 183rd on the PGA Tour in strokes gained: putting, Spieth lost more than 1.5 strokes to the field on the greens during the opening round.

“I was left with some mid-rangers that, you know, normally feel pretty good to me,” he said. “I didn’t get any to go today.”

Spieth’s opener was a microcosm for his season to date: not bad, or even remotely close to it – but still somehow below the lofty standards set by his previous play.

All but a handful of Tour players would love to trade places with the 24-year-old this season and inherit credentials that include eight top-20s in 12 starts. Spieth almost won the Houston Open, and his play peaked with a third-place showing at the Masters when he nearly re-wrote the record books during the final round. This isn’t exactly a red alert, all-hands-on-deck situation.

Likewise, his 2-under opener still leaves him within striking distance, but on a day when Marc Leishman set the pace with a 10-under 61 in the group ahead of him, Spieth felt left in the dust.

“Looking back, the last year and a half I’ve had maybe four, five opportunities where I’ve actually been in a tournament after the first round, which is really frustrating,” Spieth said. “Just the Thursdays, for whatever reason, just haven’t been good days for me.”

This is hardly the first time that Spieth’s notoriously streaky putter has gone south. In fact, it was at this event one year ago that he temporarily shelved his longtime putter in an unsuccessful attempt to turn things around.

But it wasn’t too long before the putts were falling once more, first at the Travelers Championship and then at The Open. Spieth spoke earlier in the week about pointing to his resurgence last summer as a reason to stay the course through his current putting woes, and he has no plans to overhaul that approach after a middling effort at Trinity Forest.

When the name is Spieth and the topic is putting, the general consensus is that it’s simply a matter of time.

“Just waiting for them to drop,” he said. “Got to be patient.”