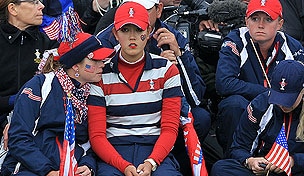 You have to force it down before you start feeling better.

That’s what it was like for Americans Stacy Lewis and Paula Creamer as they stood behind the 18th green in Ireland watching the Europeans howl and dance in the giddy aftermath of Europe’s stunning come-from-behind 15-13 victory at the Solheim Cup almost 18 months ago.

With the sun sinking and the cold, damp shadow of Killeen Castle falling over them, Lewis and Creamer stood stiffly together.

Creamer turned to Lewis there and made a pledge.

“This is never going to happen again,” she said.

Since the Solheim Cup’s beginning in 1990, the Americans have never lost on their home soil, and they will be back at home this year. The biennial event will be staged Aug. 16-18 at Colorado Golf Club outside Denver.

With the LPGA’s 2013 season set to begin next week at the ISPS Handa Women’s Australian Open, the stakes ratchet up in this Solheim Cup season. The Americans begin jockeying for roster spots with qualifying points escalating. So do the Europeans.

U.S. captain Meg Mallon and her assistant, Dottie Pepper, were in Denver this week on a Solheim Cup promotional blitz.

Europe ended a three-match losing streak to the Americans in Ireland. They won in stunning fashion with the Americans looking like they had clinched victory late in the singles matches. The Americans led in the final three matches on the course, but they didn’t win any of them. In about a 30-minute blitz, Europe’s Suzann Pettersen, Azahara Munoz and Caroline Hedwall turned around their matches.

“I remember sitting there watching and thinking, 'Is this really happening?'' said Creamer, who is 11-3-5 in four Solheim Cups. 'It was a terrible feeling. I had never been on a team that lost.'

The Americans nearly pulled out the victory despite playing singles without Cristie Kerr, who was unable to tee it up with a wrist injury and conceded her match to Karen Stupples before reaching the first tee.

Mallon feels the intensity of interest escalating among Americans who lost in Ireland, but there are questions to be answered in the six-month buildup. There are 18 events before the United States roster is set at the conclusion of the Ricoh Women’s British Open. What new faces will make the team? Which familiar faces won’t?

“I figure I have four or five players who are probably a lock to make the team,” Mallon said. “After that, it’s wide open.”

Mallon didn’t say who the probable locks are, but the U.S. point standings tell the story. Lewis, Kerr, Creamer, Angela Stanford and Brittany Lincicome are the top five. Brittany Lang, Lexi Thompson and Katie Futcher hold down the next three spots. Thompson and Futcher have never played a Solheim Cup.

With American qualifying revamped, only the top eight point earners make the team. In a new feature, the next two Americans in the Rolex world rankings automatically qualify. Morgan Pressel and Michelle Wie hold those spots.

Mallon will also get two captain’s picks. The ageless Juli Inkster, Vicky Hurst, Natalie Gulbis, Jessica Korda, Mina Harigae and Gerina Piller are among a large contingent with a shot to make the team. So are Christina Kim, Ryan O’Toole, Pat Hurst and Nicole Castrale with rebound years.

Mallon’s team, whoever ends up making it, already feels like it’s on a mission.

• The race to make the team runs through the finish of the Ricoh Women’s British Open at St. Andrews, two weeks before the Solheim Cup. The American and European teams will be introduced in a news conference at the Old Course.

• The top two Americans in the Rolex Women’s World Rankings who aren’t already qualified off the points list also automatically make the team.

• Mallon will have two captain’s picks.

• Qualifying points were accumulated last season but escalate in 2013. A victory is worth 60 points this year, up from 40 points last year. A major championship triumph will be worth 120 points, up from 80 last year. Points are awarded for top-20 finishes with second place in regular events earning 30, third place 28.5 and all the way down to two points for 20th.