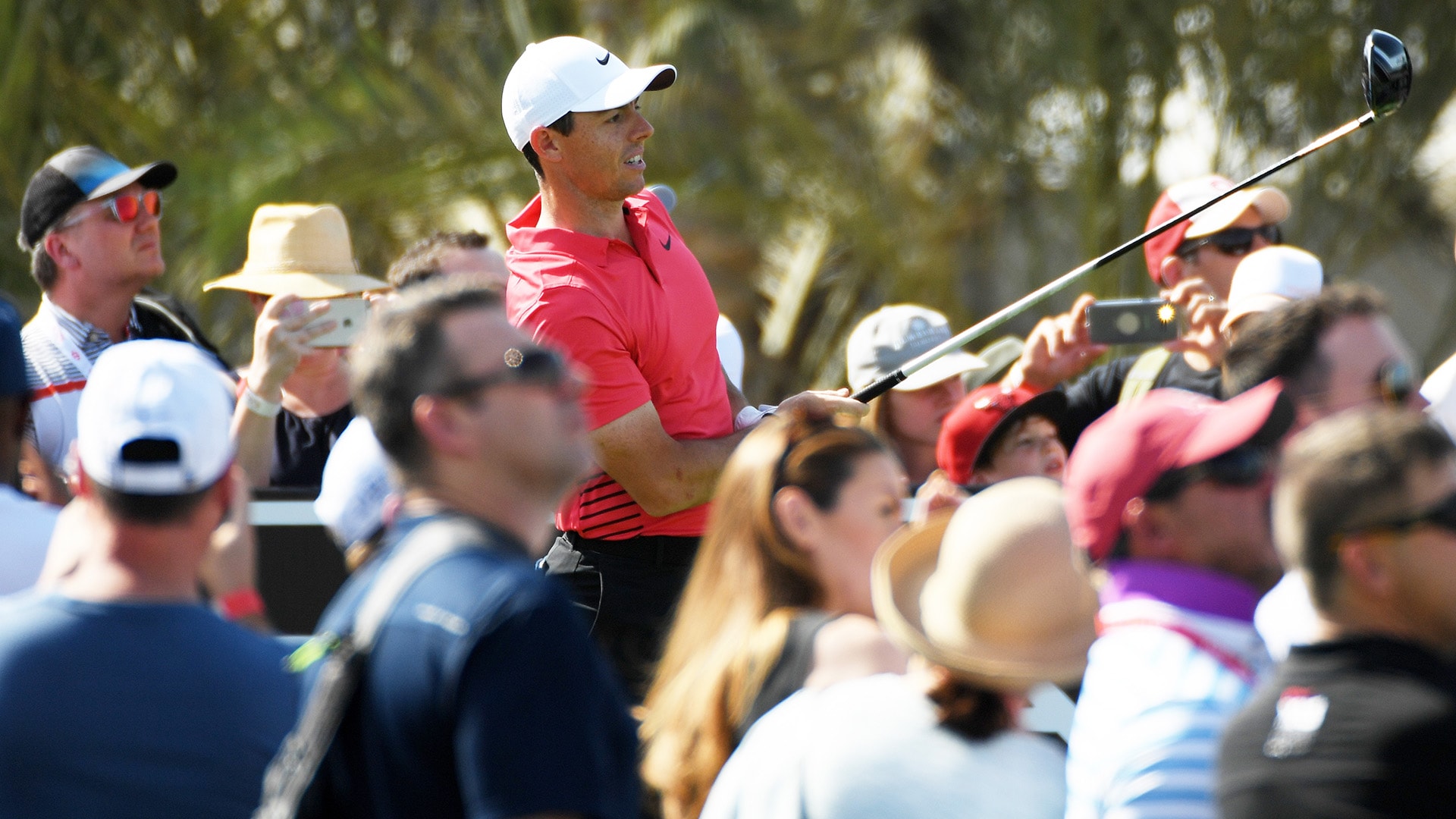 Rory McIlroy marched the fairways of Abu Dhabi Golf Club Saturday with that fighter pilot stride of his, with that confident little bob in his step that you see when he is in command of his full arsenal of shots.

So much for easing into the new year.

So much for working off rust and treating these first few months of 2018 as a warmup for the Masters and his bid to complete the career Grand Slam.

McIlroy, 28, is poised to announce his return to golf in spectacular fashion Sunday at the Abu Dhabi HSBC Championship.

With back-to-back birdies to close his round, McIlroy put up a 7-under-par 65, leaving him just one shot off the lead going into the final round.

“It’s good,” McIlroy said. “I probably scored a bit better today, short game was needed as well, but I hit the ball very well, so all in all it was another great round and confidence builder, not just for this week but obviously for the rest of the season as well.”

McIlroy can make a strong statement with a win Sunday.

After his first winless year since 2008, his first full season as a pro, McIlroy is eager to show himself, as well as everyone else, that he is ready to challenge for major championships and the world No. 1 title again.

A victory would be all the more meaningful because the week started with McIlroy paired with world No. 1 Dustin Johnson and reigning European Tour Player of the Year Tommy Fleetwood.

McIlroy acknowledged the meaning of that going into Saturday’s round.

“That proves I’m back to full fitness and 100 percent healthy,” he said. “DJ is definitely the No. 1 player in the world right now and one of, if not the best, drivers of the golf ball, and to be up there with him over the first two days proves to me I’m doing the right things and gives me confidence.”

It’s worth repeating what 2008 Masters champ Trevor Immelman said last month about pairings and the alpha-dog nature of the world’s best players. He was talking about Tiger Woods’ return at the Hero World Challenge, when Immelman said pairings matter, even in off season events.

“When you are the elite level, you are always trying to send a message,” Immelman said. “They want to show this guy, `This is what I got.’”

A victory with Johnson in the field just two weeks after Johnson won the Sentry Tournament of Champions in an eight-shot rout will get the attention of all the elite players.

A victory also sets this up as a January for the ages, making it the kind of big-bang start the game has struggled to create in the shadow of the NFL playoffs.

Johnson put on a tour-de-force performance winning in Hawaii and the confident young Spaniard Jon Rahm is just a shot off the lead this week at the CareerBuilder Challenge on the PGA Tour. Sergio Garcia is just two off the lead going into the final round of the Singapore Open. Tiger Woods makes his return to the PGA Tour at Torrey Pines next week.

To be sure, McIlroy has a lot of work to do Sunday.

Yet another rising young talent, Thomas Pieters, shares the lead with Ross Fisher. Fleetwood is just two shots back and Johnson five back.

McIlroy has such a good history at Abu Dhabi. Over the last seven years, he has finished second four times and third twice. Still, even a strong finish that falls short of winning bodes well for McIlroy in his first start of the year.

“I have never won my first start back out,” McIlroy said.

A strong start, whether he wins or not, sets McIlroy up well for the ambitious schedule he plans for 2018. He’s also scheduled to play the Dubai Desert Classic next with the possibility he’ll play 30 times this year, two more events than he’s ever played in a year.

“I’m just really getting my golf head back on,” McIlroy said. “I’ve been really pleased with that.”

A victory Sunday will make all our heads spin a little b it with the exciting possibilities the game offers this year.