Rory looking for that carefree inner-child 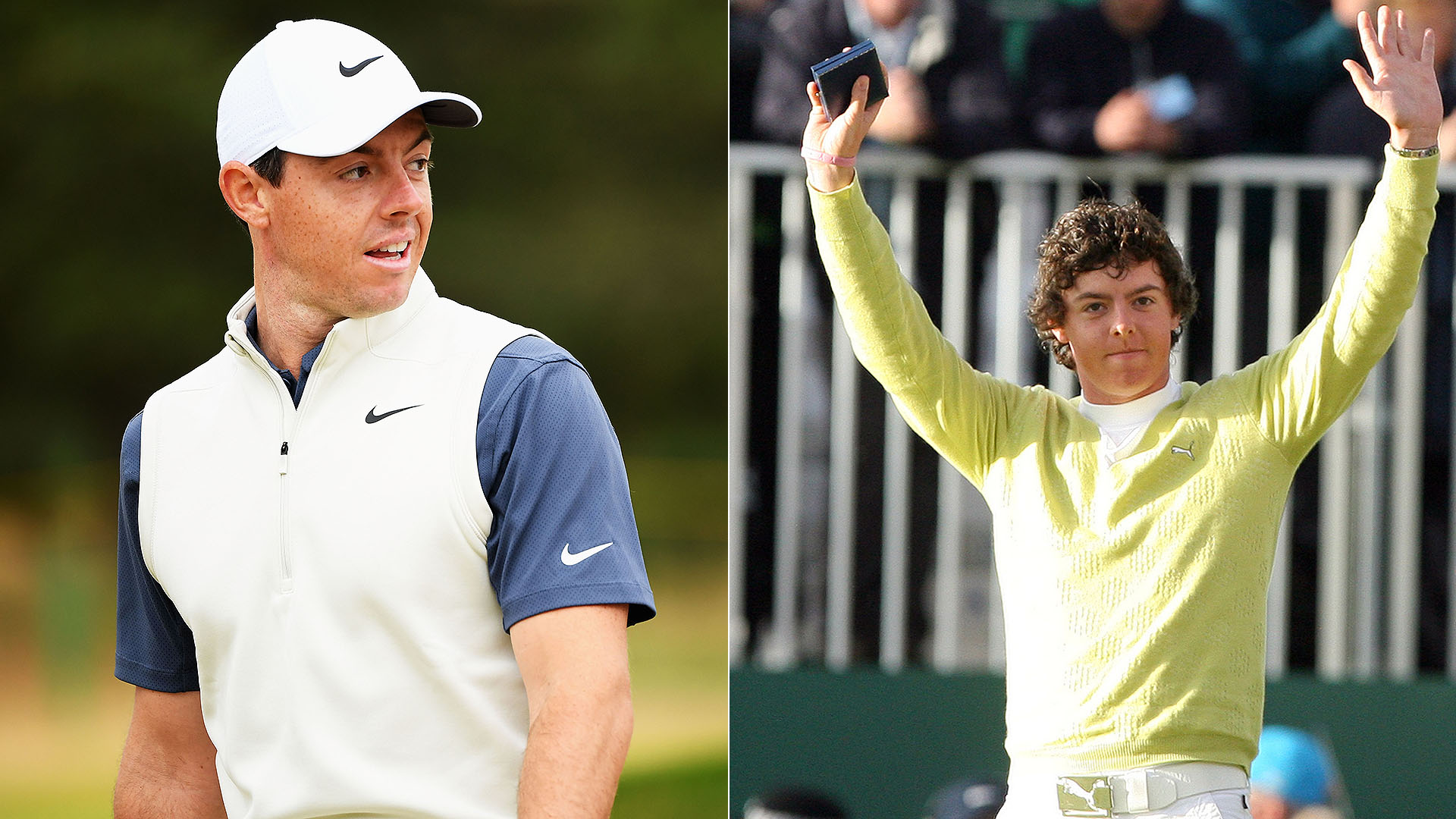 CARNOUSTIE, Scotland – Eleven years later, Rory McIlroy cringes at the photo: the yellow sweater with the deep V-neck, the chubby cheeks and the messy mop that curled under his cap.

“You live and you learn,” he said Wednesday, offering a wry smile.

The last time McIlroy played at a Carnoustie Open, in 2007, he earned the Silver Medal as the low amateur. He tied for 42nd, but the final result had mattered little. Grateful just to have a spot in the field, courtesy of his European Amateur title, he bounced along the fairways, soaking up every moment, and lingered behind the 18th green as one of his local heroes, Padraig Harrington, battled one of his favorite players, Sergio Garcia. Waiting for the trophy presentation, he passed the time playing with Padraig’s young son, Paddy. On Wednesday, McIlroy spotted Paddy, now 15, walking around Carnoustie with his three-time-major-winning father.

“He’s massive now – he towers over me,” he said. “It’s so funny thinking back on that day.”

But it’s also instructive. If there’s a lesson to be learned from ’07, it’s how carefree McIlroy approached and played that week. He was reminded again of that untroubled attitude while playing a practice round here with 23-year-old Jon Rahm, who stepped onto each tee, unsheathed his driver and bombed away with little regard for the wind or the bounce or the fescue. McIlroy smiled, because he remembers a time, not too long ago, that he’d attack a course with similar reckless abandon.

“I just think, as you get older, you get a little more cautious in life,” said McIlroy, 29. “I think it’s only natural. There’s something nice about being young and being oblivious to some stuff. The more I can get into that mindset, the better I’ll play golf.”

And so on the eve of this Open, as he approaches the four-year anniversary of his last major title, McIlroy finds himself searching for a way to channel that happy-go-lucky 18-year-old who was about to take the world by storm, to tap into the easygoing excellence that once defined his dominance.

It’s been a year since he first hinted at what he’s been missing. Last year’s Open at Royal Birkdale was the final event of his long run with caddie J.P. Fitzgerald. The chief reason for the split, he said, had nothing to do with some of the questionable on-course decisions, but rather a desire to take ownership of him game, to be freed up alongside one of his best friends, Harry Diamond.

That partnership has produced only one victory so far, and over the past few months, McIlroy has at times looked unsettled between the ropes. It’s difficult to compute, how someone with seemingly so much – a résumé with four majors, a robust bank account, a beautiful wife – can also appear disinterested and unmotivated.

“I think sometimes I need to get back to that attitude where I play carefree and just happy to be here,” he said. “A golf tournament is where I feel the most comfortable. It’s where I feel like I can 100 percent be myself and express myself. Sometimes the pressure that’s put on the top guys to perform at such a level every week, it starts to weigh on you a little bit. The more I can be like that kid, the better.”

McIlroy’s greatest asset, both then and now, was his driving – he put on clinics at Congressional and Kiawah, Hoylake and Valhalla. He was a mainstay at or near the top of the strokes gained: tee to green rankings, but over the past few years, because of better technology, fitness and coaching, the gap between him and the rest of the field has shrunk.

“I think at this stage players have caught up,” Harrington said. “There’s many players who drive the ball comparable and have certainly eaten into that advantage. Rory is well on pace to get into double digits with majors, but it has got harder. There’s no doubt there’s more players out there who are capable of having a big week and a big game for a major. It makes it tough.”

It’s not as though McIlroy hasn’t had opportunities to add to his major haul; they’ve just been less frequent and against stronger competition. In the 13 majors since he last won, he’s either finished in the top 10 or missed the cut in 11 of them. This year, he played in the final group at the Masters, and was on the verge of completing the career Grand Slam, before a soul-crushing 74 on the last day. His U.S. Open bid was over after nine holes, after an opening 80 and a missed cut during which he declined to speak to reporters after both frustrating rounds.

“I’m trying,” he said Wednesday. “I’m trying my best every time I tee it up, and it just hasn’t happened.”

A year after saying that majors are the only events that will define the rest of his career, he recently shrugged off the doom and gloom surrounding his Grand Slam drought: “It doesn’t keep me up at night, thinking, If I never won another major, I can’t live with myself.”

Eleven years ago, McIlroy never would have troubled himself with such trivial questions about his legacy. But perhaps a return to Carnoustie, to where his major career started, is just what he needs to unlock his greatness once again.