Woods does everything but win at The Open 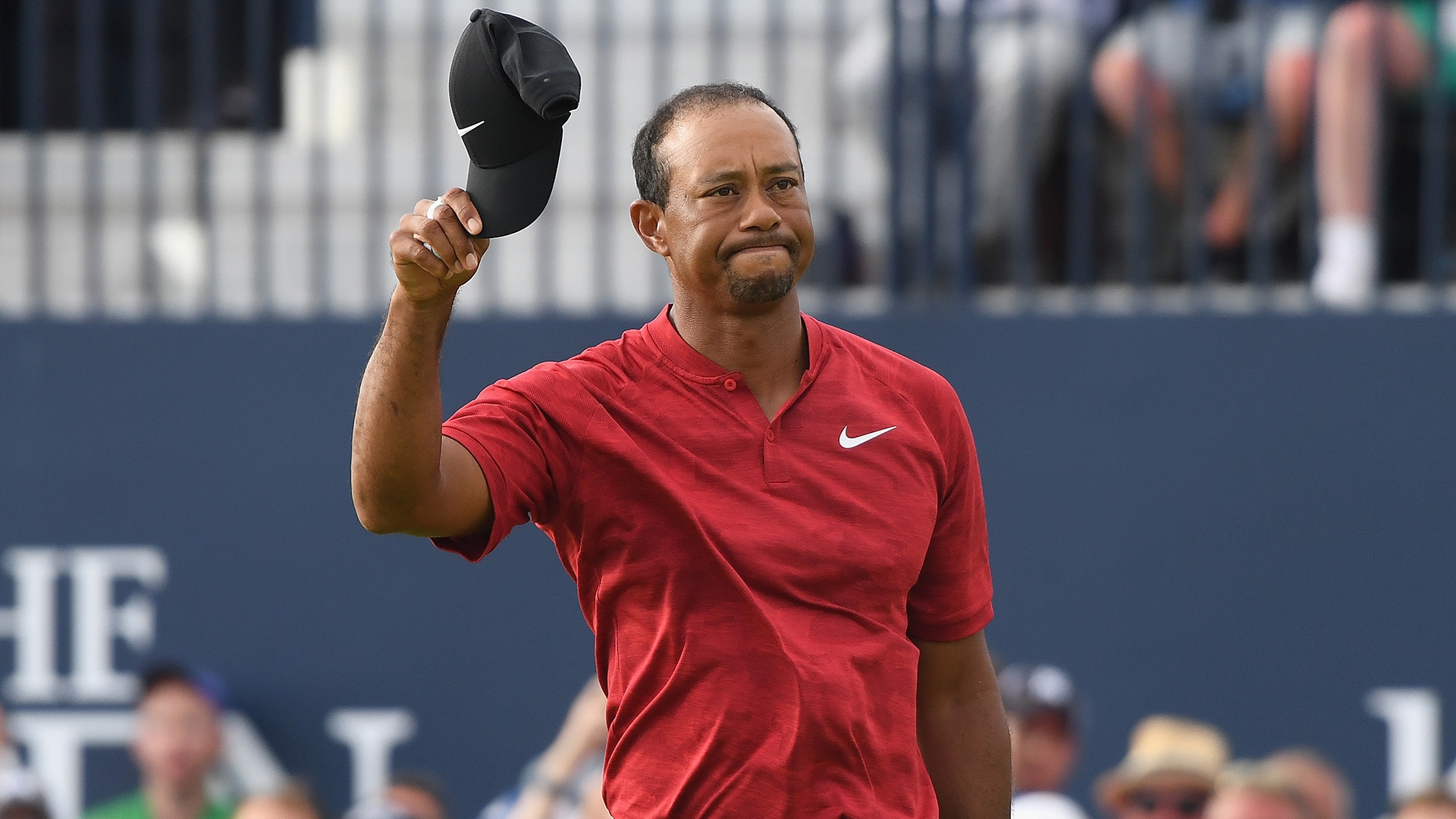 CARNOUSTIE, Scotland – For a proud man who spent the majority of his prime scoffing at silver linings and moral victories, Tiger Woods needed little cajoling to look at the bright side Sunday at Carnoustie.

Sure, after a round in which he took the solo lead at The Open with nine holes to go, the first words out of Woods’ mouth were that he was “a little ticked off at myself” for squandering an opportunity to capture his 15th major title, and his first in more than a decade. And that immediate reaction was justified: In the stiffest winds of the week, he played his last eight holes in 2 over, missed low on a 6-footer on the final green and wound up in a tie for sixth, three shots behind his playing partner, Francesco Molinari.

“Today was a day,” Woods said, “that I had a great opportunity.”

But here’s where we take a deep breath.

The scenario was improbable.

At this time last year, Woods was only a few months removed from a Hail Mary fusion surgery; from a humiliating DUI arrest in which he was found slumped behind the wheel of his car, with five drugs in his system; from a month-long stay in a rehab clinic to manage his sleep medications.

Just last fall, he’d admitted that he didn’t know what the future held. Playing a major, let alone contending in one, seemed like a reasonable goal.

This year he’s showed signs of softening, of being kinder and gentler. He appeared more eager to engage with his peers. More appreciative of battling the game’s young stars inside the ropes. More likely to express his vulnerabilities. Now 42, he finally seemed at peace with accepting his role as an elder statesman.

One major, any major, would be the most meaningful title of his career, and he suggested this week that his best chance would come in an Open, where oldies-but-goodies Tom Watson (age 59) and Greg Norman (53) have nearly stolen the claret jug over the past decade.

But success at this Open, on the toughest links in the rota?

“Just need to play some cleaner golf, and who knows?” he shrugged.

Many analysts howled at Woods’ ultra-conservative strategy across the early rounds here at big, brawny and brutish Carnoustie. He led the field in driving accuracy but routinely left himself 200-plus yards for his approach shots, relying heavily on some vintage iron play. Even par through 36 holes, he stepped on the gas Saturday, during the most benign day for scoring, carding a 66 to get within striking distance of the leaders.

Donning his traditional blood-red shirt Sunday, Woods needed only six holes to erase his four-shot deficit. Hearing the roars, watching WOODS rise on the yellow leaderboards, it was as though we’d been transported to the mid-2000s, to a time when he’d play solidly, not spectacularly, and watch as his lesser opponents crumbled. On the same ancient links that Ben Hogan took his lone Open title, in 1953, four years after having his legs crushed in a head-on crash with a Greyhound bus, Woods seemed on the verge of scripting his own incredible comeback.

Because Jordan Spieth was tumbling down the board, the beginning of a birdie-less 76.

Rory McIlroy was bogeying two of his first five holes.

Xander Schauffele was hacking his way through fescue.

Once Woods hit one of the shots of the championship on 10 – hoisting a 151-yard pitching wedge out of a fairway bunker, over a steep lip, over a burn, to 20 feet – the outcome seemed preordained.

“For a while,” McIlroy conceded, “I thought Tiger was going to win.”

But perhaps it’s no coincidence that once Woods took the lead for the first time, he frittered it away almost immediately. That’s what happened Saturday, when he shared the lead on the back nine and promptly made bogey. On Sunday, he drove into thick fescue on 11, then rocketed his second shot into the crowd, the ball ricocheting off a fan’s shoulder, and then another’s iPhone, and settling in more hay. He was too cute with his flop shot, leaving it short of the green, and then missed an 8-footer for bogey. He followed it up on 12 with another misadventure in the rough, leading to a momentum-killing bogey. He’d never again pull closer than two shots.

“It will be interesting to see going forward, because this was his first taste of major championship drama for quite a while,” McIlroy said. “Even though he’s won 14, you have to learn how to get back.”

Over the daunting closing stretch, Woods watched helplessly as Molinari, as reliable as the tide coming in off the North Sea, plodded his way to victory. With Woods’ hopes for a playoff already slim, Molinari feathered a wedge to 5 feet on the closing hole. Woods marched grim-faced to the bridge, never turning around to acknowledge his playing partner’s finishing blow. He waved his black cap and raised his mallet-style putter to a roaring crowd – knowledgeable fans who were appreciative not just of Woods making his first Open start since 2015, but actually coming close to winning the damn thing.

“Oh, it was a blast,” Woods would say afterward. “I need to try to keep it in perspective, because at the beginning of the year, if they’d have said you’re playing The Open Championship, I would have said I’d be very lucky to do that.”

Last weekend, Woods sat in a box at Wimbledon to watch Serena Williams contend for a 24th major title. Williams is one of the few athletes on the planet with whom Woods can relate – an aging, larger-than-life superstar who is fiercely competitive and adept at overcoming adversity. Woods is 15 months removed from a fourth back surgery on an already brittle body; Williams nearly secured the most prestigious championship in tennis less than a year after suffering serious complications during childbirth.

“She’ll probably call me and talk to me about it because you’ve got to put things in perspective,” Woods said. “I know that it’s going to sting for a little bit here, but given where I was to where I’m at now, I’m blessed.”

But Woods didn’t need to wait for that phone call to find some solace. Waiting for him afterward were his two kids, Sam, 11, and Charlie, 9, both of whom were either too young or not yet born when Tiger last won a major in 2008, when he was at the peak of his powers.

Choking up, Woods said, “I told them I tried, and I said, 'Hopefully you’re proud of your Pops for trying as hard as I did.' It’s pretty emotional, because they gave me some pretty significant hugs there and squeezed. I know that they know how much this championship means to me, and how much it feels good to be back playing again.

“To me, it’s just so special to have them aware, because I’ve won a lot of golf tournaments in my career, but they don’t remember any of them. The only thing they’ve seen is my struggles and the pain I was going through. Now they just want to go play soccer with me. It’s such a great feeling.”

His media obligations done, Woods climbed up the elevated walkway, on his way to the back entrance of the Carnoustie Golf Hotel & Spa. He was surrounded by his usual entourage, but also two young, cute members of his clan.

Sam adhered to the strict Sunday dress code, wearing a black tank top and red shorts. But Charlie’s attire may have been even more appropriate. On the day his dad nearly authored the greatest sports story ever, he chose a red Nike T-shirt with a bold message emblazoned on the front, in big, block letters:

After this riveting performance, after Tiger Woods nearly won The Open, are there really any left?