World Cup notes: Pieters and Detry have Belgium just one back 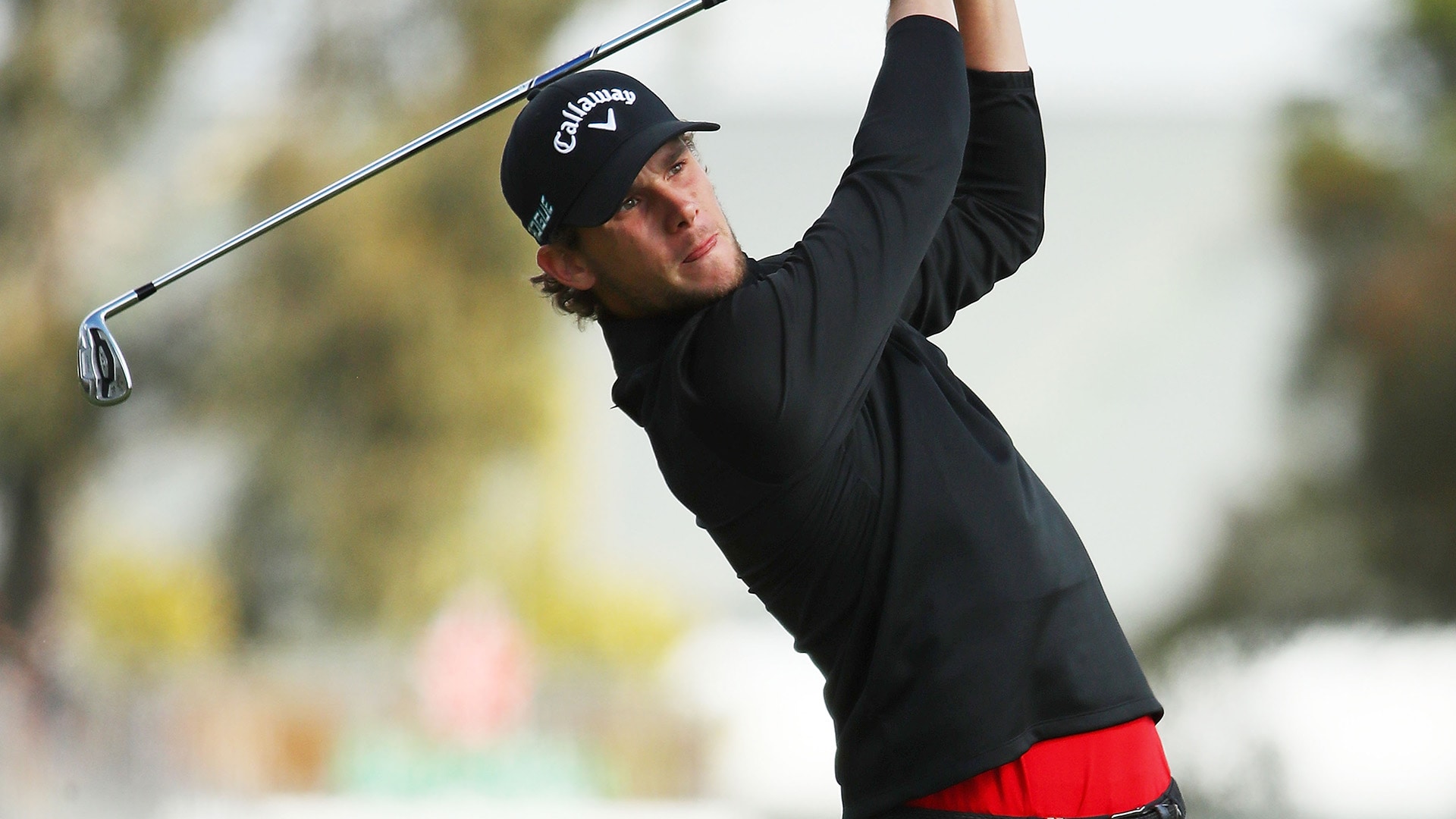 MELBOURNE, Australia – Jhonattan Vegas woke up Thursday expecting the worst of Melbourne's weather after officials moved up the tee times by an hour to try to beat expected rain in the afternoon.

He was pleasantly surprised to see the sun shining.

He and his Venezuelan partner Joseph Naffah shot 7-under 65 and were three strokes behind leading South Korea, England and Australia at the World Cup.

''I really thought that we were going to have a little rain, a lot of wind, rain gear,'' Vegas said. ''It was going to be one of those crazy days. But it was absolutely perfect.''

It was this big, honest

Like a big fish story, Shane Lowry's birdie putt for Ireland at the World Cup kept getting longer, thanks to his partner.

Lowry and Paul Dunne shot an 8-under 64 and were tied for seventh with India and two strokes behind leaders England, South Korea and Australia at Metropolitan.

''I made good putts when I needed to save par,'' Lowry said. ''All in all, pretty happy. Then the bonus on 17 makes it even better, a nice raker across the green.''

Lowry added: ''I was over the moon to see it go in. It was a bonus. In this format, you make hay when the sun shines and we did that.''

Full-field scores from the ISPS Handa World Cup of Golf

As New Zealand's top-ranked golfer at the World Cup, Ryan Fox had the choice to pick his partner, and he took 43-year-old veterarn Mark Brown when several other players were not available.

Brown responded with a strong round Thursday to lead New Zealand to a 7-under 65 and tied for ninth.

''I was feeling a bit of pressure coming into this to try and justify Ryan picking me,'' Brown said. ''It was good to get off to a good start.''

''I think I made one birdie today, so it's pretty much all on Brownie,'' Fox said. ''Bernie played some great golf and it was good to see. He kind of needed to because my golf was terrible for the most part.''

Danny Lee withdrew from the event for New Zealand to spend time with his family. Michael Hendry was unable to commit with his Japan tour card in jeopardy.

Thomas Pieters and Thomas Detry birdied six of their last seven holes for a 9-under 63, a stroke behind the leaders, but it didn't always look like it was going to end that way.

They made five pars to open, then on the par-3 sixth, their tee shots were about 100 feet apart.

''We weren't that far away from thinking, 'OK, maybe it's now time to go back and close the season off right now,''' Detry said.

But the Belgian pair saved par on that hole, then made three birdies to finish off the front nine, followed by their six of nine on the back.

''I disappeared for a couple of holes and we made a couple of good putts,'' Pieters said. ''Worked out perfect. We just want to go out there and have fun. It sounds like a cliche, but that's how you're going to play your best golf.''

Anirban Lahiri and Gaganjeet Bhullar were tied for seventh with Ireland after making five birdies in six holes on the front nine and another birdie on 18, giving them what Lahiri called an ''aggressive'' 64.

''I think both of us felt we should have made three or four more birdies coming in,'' Lahiri said. ''We missed a few, but you have to feed off each other's energy.''

On Friday, it will be alternate shot, or foursomes.

''I think the mindset changes overnight,'' Lahiri said. ''We've played this quite a bunch, Eurasia Cups... Presidents Cups as well. So that experience is there and you can understand the dynamic.'' 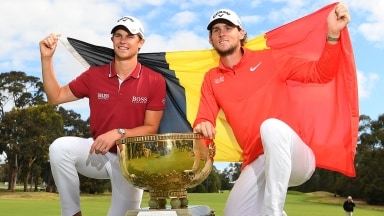 Thomas Detry and Thomas Pieters of Belgium lifted the World Cup of Golf trophy on Sunday. They may have won it on Friday. 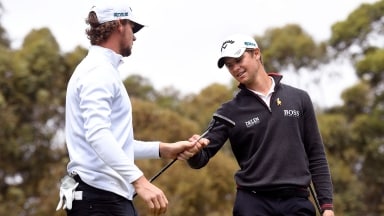 Thomas Pieters and Thomas Detry played a mid-round, four-hole stretch in 5 under par during a 9-under 63 Saturday to give Belgium a five-stroke lead after three rounds.

Americans Matt Kuchar and Kyle Stanley were one of the weather casualties, shooting 79, with bogeys on their last five holes.