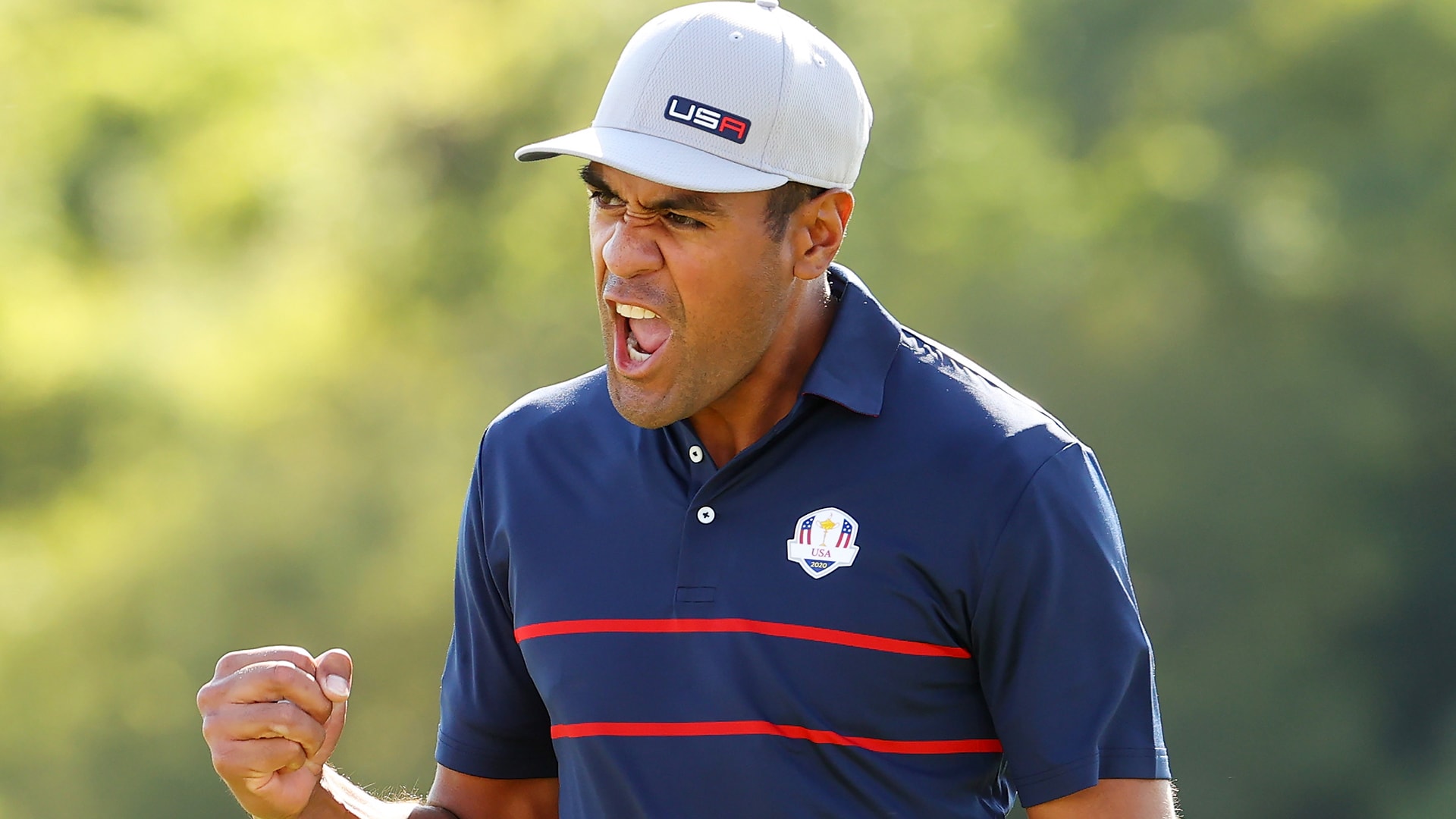 What a difference three years make.

After surrendering a 3-1 first-session lead by dropping all four foursomes matches – and later losing by seven – at the 2018 Ryder Cup in Paris, the U.S. built on its 3-1 foursomes advantage on a windy Friday afternoon at Whistling Straits.

American captain Steve Stricker broke up his winning pairs from the morning, yet his players still delivered, winning the opening four-ball session, 3-1, to take a 6-2 lead after Day 1 of this 43rd edition of the biennial matches.

Tony Finau and Harris English got the first afternoon point for the U.S. by easily dispatching Rory McIlroy and Shane Lowry. Dustin Johnson and Xander Schauffele, who won in the morning with different partners, soon followed in the opening match. The last two matches to finish ended up in ties, meaning the Americans didn't lose a single match in the afternoon.

The U.S. has their biggest lead after Day 1 of the Ryder Cup in 46 years.

"Proud of the team. Super proud," Bryson DeChambeau said after getting a tie alongside Scottie Scheffler against Jon Rahm and Tyrrell Hatton. "They fought hard every single shot out there, from what I saw, and, again, looking back on it, this is a great start, but the job's not over. We have two more days, a lot more golf, and we cannot lose our mindset to win."

Yet, the Euros remain hopeful.

"You're never out of the fight," said Hatton.

Here's how the afternoon action unfolded, match by match:

Some questioned Stricker’s decision to pair Johnson and Schauffele after each won with other partners in the morning, but they certainly made their captain look good.

Schauffele started things with a 4-foot birdie make at the par-3 third to take the first lead in this match before European mistakes at Nos. 4 and 5 cost them those holes, too.

However, 5-foot birdie conversions by Wiesberger, at No. 6, and Casey, at No. 9, brought things closer, as the Americans led just 1 up at the turn.

Johnson hit a good drive at the short par-4 10th and his 4-foot birdie make gave the U.S. another lead. A hole later, he walked in a 15-footer for birdie to win a second straight hole. And he sunk a second straight 15-footer at No. 12 to match Wiesberger.

Casey birdied the final par-5 to keep the Europeans' hopes alive, but that hope was short-lived. Schauffele's match par at No. 17 ended the threat.

Man, was this one a heavyweight battle.

As expected, DeChambeau stole the attention right from the start, hitting a spectator with a mammoth drive at the first hole before hitting a miraculous flop shot to 9 feet and making a hole-tying birdie. Four holes later, at the 581-yard, par-5 fifth, he took an ultra-aggressive line and piped one 417 yards, leaving himself just 72 yards into the green for his second. He’d eagle to even the match back up after Hatton’s par won the Euros No. 4.

DeChambeau made more noise at the par-4 eighth, sinking a 20-foot birdie putt to give the U.S. its first lead in this match, but both U.S. guys missed good looks at birdie and Rahm, the world No. 1, made a short one at No. 9 to eliminate the American lead at the turn.

The match continued to go back and forth on the back side. Scheffler got the lead right back, chipping 16 feet past the hole at No. 10 but converting the birdie putt from up against the collar. And Rahm wedged one to 5 feet to win the 11th hole in response. The par-3 12th hole was spectacular, as three of the players hit their tee balls inside of 5 feet. Rahm nearly aced it, ending up 20 inches away, but DeChambeau answered, doing one inch better. They tied the hole with birdies.

DeChambeau wasn’t done unleashing drives, and at the  394-yard 13th hole, he hammered one 392 into a greenside (!) bunker. However, he still made par and there was no blood there. Two holes later, there was, as DeChambeau this time made a winning par putt to give the U.S. a 1-up lead late.

At the par-5 16th hole, the Americans looked as if they'd be going dormie, but Rahm matched Scheffler's birdie.

"I'm not going to lie, when I hit my bunker shot on 16 and we both had over 15 feet for birdie and they were both inside 10 feet, things did look dark to say the least," Rahm said. "Luckily I was able to roll mine in, and I told [Hatton] right away if we finish strong we can still get this done."

They didn't rally for the full point, but this match would fittingly end in a tie. One down with one to play, it was Hatton, not Rahm, who stuck his approach close and made birdie to avoid the loss.

"Not many people are as clutch as he is under pressure, and he showed it right here," Rahm said of Hatton, "so hopefully this gives him a lot of confidence for tomorrow and get this ball rolling."

Added DeChambeau: "I have a great partner and loved every minute of it and hope we can do it again soon. We are a good team and we're going to dominate."

It wasn’t a great morning for McIlroy, but Europe’s star finally came alive at the par-5 fifth, as he took the Bryson line and left himself 121 yards in. He followed by making a 30-foot eagle putt to win the hole.

But that would be where the highlights began and ended for McIlroy. Finau, rather, was the man of the match with eight 3's on his card.

Finau answered on the next hole, the short par-4 sixth, driving it close to the green before converting a 5-footer for birdie to square the match back up. After English birdied to win the eighth hole, Finau then hit a good wedge into the ninth green – McIlroy missed badly and long – and birdied that hole, as well, to give the U.S. a 2-up lead. And a third straight hole was won by the Americans, as Finau rolled in a 15-foot birdie at No. 10 to take the lead to 3 up.

Things continued to get away from the Europeans, as Finau birdied again, from 11 feet at No. 13, and the lead grew to 4 up. Two holes later, Finau got up and down for par to seal the victory.

"Man, you've just got to enjoy it," Finau said. "All these people out here cheering us on, that's the biggest thing. You have to enjoy it. I learned that in Paris, and the more you can just have fun with it, seems to keep you loose, and you know, I was able to roll the rock nicely today."

Added McIlroy: "I haven't seen Tony putt as good as that in a long time."

In his past three team-play matches at the Ryder Cup, McIlroy hasn't reached the 16th hole.

"We got unlucky today," Lowry said. "We probably didn't play our best but we hit some good shots and got bad breaks. ... We probably should have given them a better match than we did but it is what it is."

Ladies and gentlemen, Thomas has arrived.

After a cold putting performance in the morning session, Thomas kickstarted things by sinking a 12-footer at the opening hole to give the U.S. a 1-up lead. However, he missed an 8-footer for birdie at No. 5 that would’ve won the hole following European victories at Nos. 3 and 4. Hovland's birdie at No. 3 came on a chip-in.

Cantlay wasn’t mistake-free on the greens in foursomes, either, and both he and Thomas missed makeable birdie putts at No. 6 – though Cantlay had a nice pitch from the dirt path – after Fleetwood rolled in his 15-footer from the fringe to give the Europeans a 2-up advantage.

Fleetwood then stretched that lead to 3 up after a 9-foot birdie make at No. 8, but Thomas erupted – literally – at the ninth hole, canning a 30-footer for birdie to get a hole back. He then screamed at the crowd, “I can’t f------ hear you!”

The U.S. got another back, to 1 down again, at the par-3 12th as Cantlay stuffed one to gimme range. Hovland couldn’t match from 10 feet. Three holes later, the match appeared on the verge of being knotted up, but Fleetwood drained a 12-footer for par to keep the 1-up Europe lead.

That advantage didn't last much longer, though, as Thomas nutted a 3-wood to 17 feet and made the eagle putt at No. 16 to tie the match. To no surprise, Thomas again went bonkers.

After a tied 17th hole, Thomas had a chance to win it from 45 feet, but he'd come up short. After two Euro birdie misses, this match awarded both sides half-points.