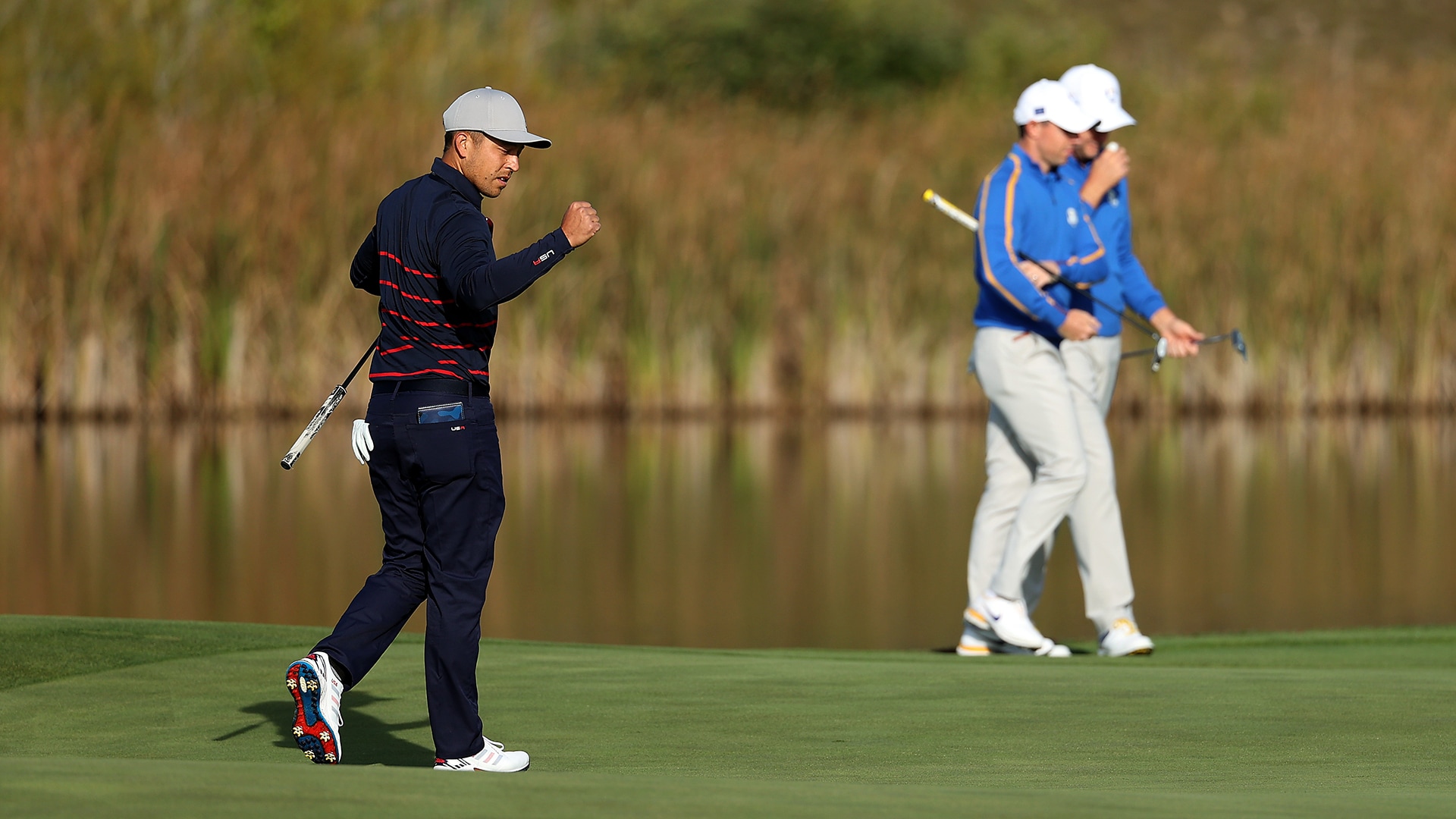 The 43rd Ryder Cup is officially underway, and the Americans have drawn first blood.

Despite the American duo of Jordan Spieth and Justin Thomas dropping the opening foursomes match against Jon Rahm and Sergio Garcia, the home team took each of the other three matches to open up a 3-1 lead on Friday morning at Whistling Straits.

Three years ago in Paris, the Americans also led 3-1 after one session before going on to lose the cup by seven points.

Here's how it all unfolded, match by match:

The first point of this Ryder Cup went to the Spaniards, and they did it against a pair that went 3-1 three years ago in Paris.

The Americans took an early 1-up lead with an easy birdie at the par-5 second, but it could’ve been more after Thomas didn’t touch the hole from 6 feet at the opening hole. But Garcia hit a nice tee ball to 15 feet at the par-3 third and Rahm rolled in the birdie, which sparked Rahm’s flatstick. He drained a 60-footer from the fringe at the next, a 12-footer at No. 7, a 15-footer at No. 8 and a shortie at No. 10 to give the visiting duo a 3-up advantage.

"With his ball-striking,  I knew my job was going to be to make some putts, and that's exactly what I did early on," Rahm said.

Thomas had an opportunity to get one back for he and Spieth after Garcia missed a 10-footer for birdie at the par-3 12th, but his 9-footer slid by low and left. He made up for it a hole later as he calmly jarred a 5-footer for birdie to get a hole back.

While Rahm was making all the putts early, Garcia finally got in on the action at the par-4 15th by making an 8-footer for birdie for a 3-up lead. He then blew a kiss to the crowd.

After winning No. 16 with a two-putt birdie to extend the match, the Americans' chances ended as Thomas' tee ball at the par-3 penultimate hole hit a grassy knoll guarding the front-right of the green and kicked left and into a thick lie on the side of a small cliff. Spieth hit an incredible flop to 4 feet, but Thomas missed, and he conceded a short par and the match to the Euros.

Anytime a foursomes combo can make seven birdies, they'll be tough to beat. On Friday morning, that was Johnson and Morikawa.

All the talk about Morikawa’s putting was quickly silenced after he holed a 10-footer for birdie to win the opening hole after putting Johnson in the thick stuff off the tee. But the Europeans won the par-3 third after Johnson missed from 8 feet and Hovland made a 5-footer, and the visitors took the next hole with par to grab their first lead.

The Americans responded with wins at Nos. 6 and 7 – Johnson converted a birdie from 12 feet at the former – and this match turned with the home team leading 1 up. The lead was stretched to 2 up after Johnsons stuffed an approach to 5 feet at No. 11 and Morikawa finished it off. On the next hole, the par-3 12th, Johnson did similarly, and so did Morikawa, to give the U.S. a 3-up lead.

It looked like that lead would be extended after Casey blew his drive at No. 13 right and into the weeds, but Hovland responded by making a 12-footer for par and Morikawa and Johnson three-putted for bogey. However, the Euros wouldn't win another hole. Morikawa hit a beauty of a second shot into the par-5 16th green and Johnson lagged close from 30 feet to set the stage for a match-winning Morikawa make.

"Everyone knows he's a really good iron player, and if I'm driving it well and in the fairway, we're going to be a pretty tough team," Johnson said.

It was a nervy first few holes for the Europeans, as Westwood whiffed on a 5-footer for birdie at the first and the Americans won Nos. 2 and 3 to take a 2-up lead. But Berger missed the green at the par-4 fourth and Koepka followed by thinning his chip well over the green. Fitzpatrick got a 12-footer to drop at the sixth to get back to 1 down, and a short Koepka par miss at the ninth brought the match back to tied at the turn.

The U.S. got aggressive off the tee at the par-4 10th, with Koepka cutting the corner and leaving Berger a pitch from the rough. It worked, as Berger set Koepka up to roll in a 5-footer for birdie to retake the lead. The favor was returned at No. 11, where Berger converted from 8 feet to give his side a 2-up advantage.

After five straight ties (all with pars), Koepka finally made a short bogey putt at No. 17 to win the match.

Talk about a nightmare start for the two European stalwarts. Cantlay and Schauffele made a good partnership at the 2019 Presidents Cup, going 2-2 together, and are close friends, but no one envisioned them winning each of the first five holes, which is exactly what they did. Three of those were won with birdie, including the par-4 fifth, where Schauffele drained a 35-footer.

A few holes later, at the par-4 eighth, the Americans were in trouble after missing a 10-footer for par, but Poulter couldn’t get a 4-footer to drop and the hole was tied. But Cantlay had his pitch at No. 10 roll back down the fairway and the U.S. duo bogeyed No. 11 to give the Europeans two straight holes.

Cantlay matched Poulter's short birdie at No. 12 to stop the slide, and the PGA Tour Player of the Year hit a great approach into No. 14 to set Schauffele up with a short birdie to get back to 4 up. Schauffele's approach at the next hole was also good, to 10 feet, and it was eventually conceded – along with the match – after the Euros couldn't get inn with birdie.

Poulter, nicknamed "The Postman" because if his past performances at these matches, is now 1-4-1 in team play since Medinah in 2012.