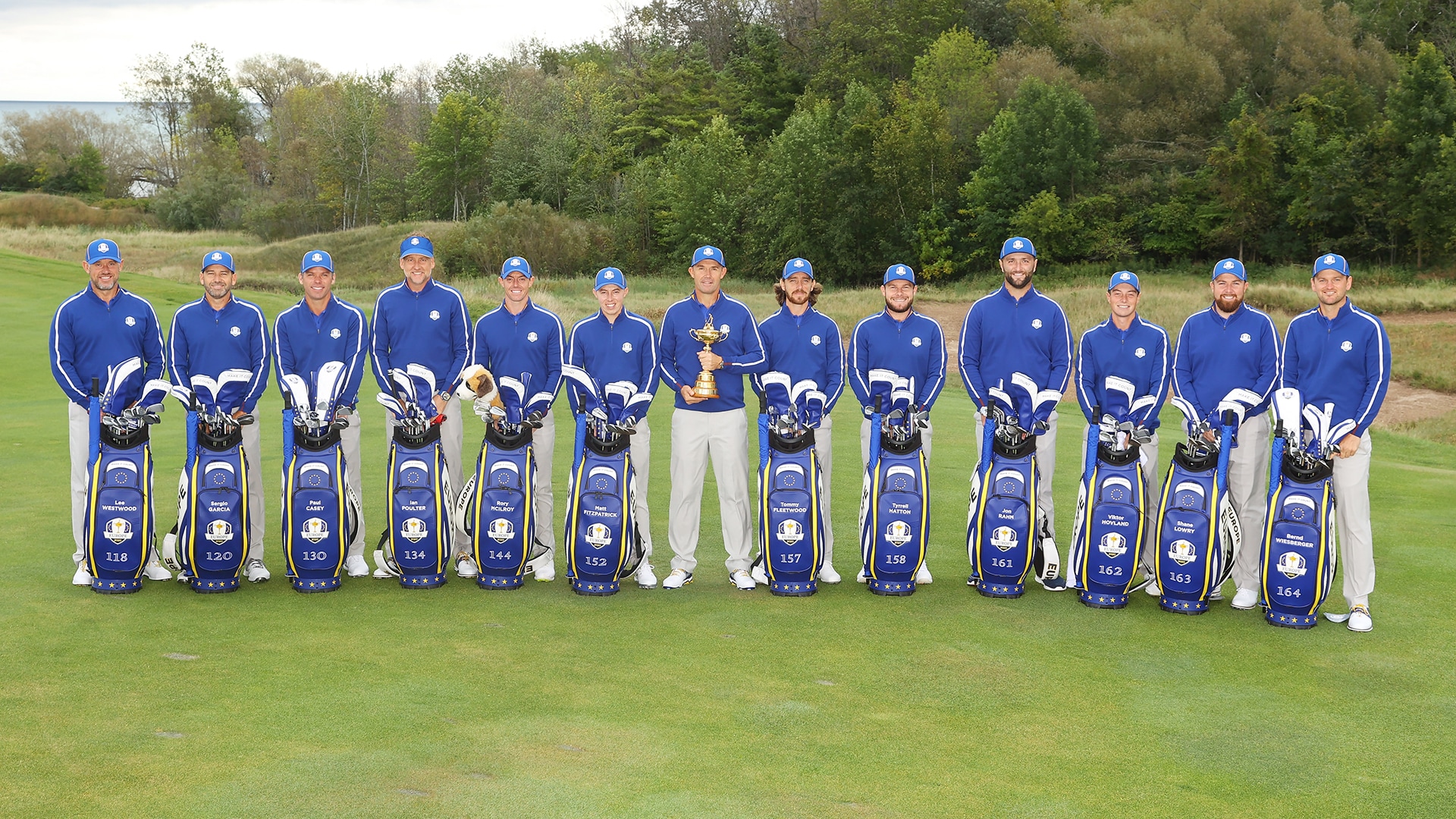 Analytics have become an increasingly important part of the entire Ryder Cup process, but European captain Padraig Harrington is taking his numbers game to a new level – literally.

Stitched on the golf bags of all 12 of Harrington’s players this week at Whistling Straits is a number. The digits are unique to each player and signify where they fit on Team Europe’s historical timeline, which has featured 164 players, from the first eight Brits in 1927 to Austria’s Bernd Wiesberger, who was the last rookie selected for this year’s squad.

“Mine is the smallest number, obviously: 118,” said Lee Westwood, who is competing in his 11th Ryder Cup this week.

The 48-year-old Westwood, who has played in 44 career cup matches, just three shy of Phil Mickelson’s record. His first match came back in 1997 at Valderrama, where the Europeans, captained by the late Seve Ballesteros, edged the Americans by a point.

It was a solid debut for Westwood, who went 2-3 and teamed with Nick Faldo for all four team sessions, but the Englishman doesn’t remember the birdies and bogeys from that week as much as the passion that exuded from the European team.

“I knew from day one, really, [how important the Ryder Cup was],” Westwood said. “Listen, that week the captain was Seve Ballesteros. There may have been one or two people over many generations as passionate as Seve about the game of golf, but I doubt there's been many as passionate about the Ryder Cup as Seve was. … You just fed off him, really. With Nick Faldo as my partner, Seve and Nick both held the Ryder Cup in high regard, and just being around them, you could see how much it meant to them.

“Passion for the Ryder Cup was never something that I had to learn or gain. Pretty much like European team spirit is not something we have to work on; it's just there.”

Sergio Garcia can attest. The Spaniard, whose 25 ½ career points earned is a Ryder Cup record, has played in nine of these matches. His debut came in 1999, and he teamed with Jesper Pernevik to go 3-0-1 in team play, though the Euros lost by one at The Country Club in Brookline, Massachusetts.

But when it came to his number, Garcia had no clue until Monday night when Harrington played a short, inspirational video before presenting each player his number and bag.

“I've always known that being a part of the Ryder Cup team is very difficult, but I didn't know that only that little amount of players have made it,” said Garcia, who is No. 120. “So, that showed you how difficult it really is. That's why every time I'm a part of a team or the rest of our teammates, that's why we give it the respect that it deserves, because it's so difficult to be a part of it.

McIlroy, No. 144 (behind just Westwood, Garcia, No. 130 Paul Casey and No. 134 Ian Poulter), described some of the video presentation, which featured the theme, "Make it count."

“To put it into context: 570 people have been into space. I think over 5,000 people have climbed [Mount] Everest. 225 have won a men's major. When you sort of break it down like that it's a pretty small group and it's pretty cool,” McIlroy said.

“It's a small collection of people that have played for Europe in the Ryder Cup,” McIlroy added. “I think that's what brings us very close together, and that's been one of our sort of big focus points this week is just being here is very special and being part of a European team. Very few people can call themselves a European Ryder Cup player.”