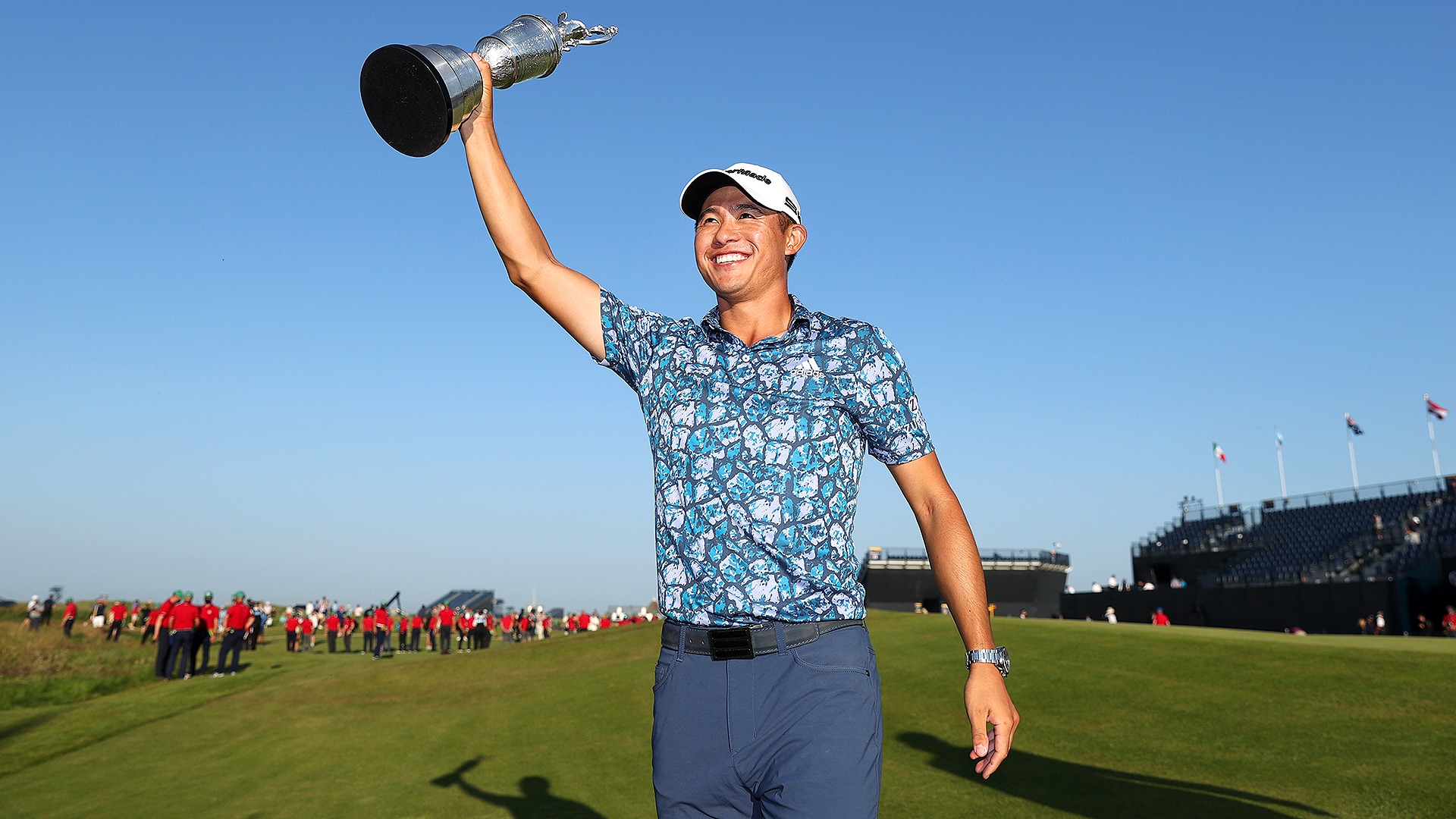 SANDWICH, England – This wasn’t how a world-class athlete closes, not with four bogeys and a double bogey, a final-round 73, and a pedestrian tie for 71st. Even more concerning, it’s not exactly the preferred tune-up for the year’s final major.

Following that largely forgettable final round at last Sunday’s Scottish Open, Collin Morikawa and his caddie, J.J. Jakovic, loitered outside the palatial Renaissance clubhouse, unpacking the week’s happenings. But this wasn’t a postmortem. This was prologue.

It was the first time Morikawa had played links golf. He didn’t know the bounces, the turf, the green speeds. Instead of frustration, however, there was a sense of accomplishment.

“After the tournament he was like, ‘I don’t feel that bad. My speed was awful on the greens, need to figure that out. I need to figure out this turf interaction with the irons,’” Jakovic said. “For him it was like, hey, I got some experience and I’m learning how to play this golf. He came away and said it was a big week for him.”

Learning. Learned. No need for a semantics lesson just yet, but know that your Champion Golfer of the Year leveraged every ounce of that four-round crash course in links golf to perfection at Royal St. George’s. There were no surprise bounces or untimely wind gusts that he couldn’t handle, and that effortlessly simple swing - with some new, more links-friendly irons - took care of the rest.

The next time Morikawa misses the center of the clubface will be the first time. At least that’s what Jordan Spieth, Jon Rahm and all the other would-be champions must have thought on a perfect summer afternoon along the English shore.

After starting the final round a stroke behind overnight leader Louis Oosthuizen, Morikawa took the lead with his first birdie of the day at the seventh hole - which Oosthuizen inexplicably bogeyed. He set the pace the rest of the way.

“The seventh hole was definitely the turning point,” Morikawa said. “At that point I felt like I was hitting quality shots. I was hitting good shots to give myself chances for birdie. Just to have that little switch of a two-shot swing kind of got that round started and into another gear.”

He added birdies at Nos. 8 and 9 to move three strokes clear of the field and was able to hold off late-inning heroics from Spieth, who finished alone in second place and two shots back, and Rahm, who was another shot back and tied for third with Oosthuizen.

Spieth, of all people, recognizes the species. He knows the look and the fearless style of play. He was Morikawa before Morikawa, in that manner. So as disappointing as Spieth’s finish was, there was a sense of inevitability that was impossible to shake.

“How old is he?” marveled Spieth.

Morikawa is a sweet-swinging 24 years old. 24. Tiger Woods had won three times on the PGA Tour and played his first Tour Championship before Morikawa was born. And yet on Sunday, Morikawa negotiated a bounding linksland and held off the year’s deepest leaderboard for his second major title.

He also endured the inevitable bad bounces. Following three consecutive birdies, starting at the seventh, Morikawa’s approach into No. 10 faded hopelessly right of the green, caught the edge of a mound and caromed into the deep hay.

As sublime as his ball-striking is, and as functional as his driving can be, the asterisk in Morikawa’s game is his putting. He’s 172nd on Tour in strokes gained: putting, 79th in three-putt avoidance and 141st from 5 feet - which is kind of a crucial distance on links greens.

Following his dismal performance on the greens last week in Scotland, Morikawa devised a plan for longer putts (outside 30 feet), using a conventional grip while still using his preferred “saw” grip for shorter putts. The experiment was a hit and he led the field with a 1.54 putting average. He also converted his 12-footer for par at the 10th hole and an equally impressive par attempt at the 15th hole after another untimely bounce and even worse lie in the gorse.

“Definitely one of the best [putting performances], especially inside 10 feet. I felt like it was as solid as it's going to get,” Morikawa said. “I don't think I really missed many from that distance. Especially in a major. I'm going to tell myself probably tomorrow, why can't I keep doing that all the time?”

Morikawa, who posted four rounds in the 60s, including a closing 66, had already established himself as one of the game’s best young players, but this victory propeled him into a new category. He became the first player to ever win two majors in his debut [he also won in his first PGA start, in 2020] and he also answered whatever lingering questions might have remained about either his game or his status as a closer.

As accomplished as Morikawa is at such a tender age there was a common take, however contrived, that he’d done nearly all his damage during a pandemic and largely without fans. Last summer, he outdueled Justin Thomas at the Workday Charity Open at a nearly empty Muirfield Village. A month later, he clocked an even more impressive performance to win the PGA Championship at an equally empty TPC Harding Park. 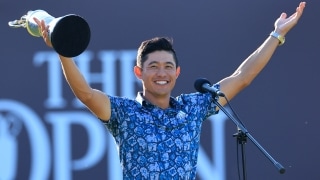 How does Collin compare to today's other stars?

Now that he has two majors, how does Collin Morikawa compare with today's other stars such as Jordan Spieth and Jon Rahm?

For the first time since Day 1 at last year’s Players Championship, golf welcomed back a full house at Royal St. George’s, a full-throated 32,000 each day who were keen to be heard. There was no relative anonymity, no place to shelter from the chaos, no quiet.

“You step in to 35,000 and holding a lead down the stretch, I think is really impressive considering that's a first, not only first Open Championship, but given the timing of when he's been out here,” Spieth said. “He spent a year, year and a half of that in essentially a crowd-less environment, and it's harder. It's harder with big crowds. You feel it more. You know where you are. It's a bigger stage. I think that's impressive.”

There’s no shortage of reasons to be impressed with Young Collin, but one can't overlook his bogey-free final round and an eerily calm demeanor, considering his rookie status. For those dumbstruck by his calm from afar, it was just as extraordinary from within the circle of friendship.

Following his two-stroke victory at the PGA Championship last August, Morikawa and Jakovic were enjoying a quiet moment and a glass of wine inside the TPC Harding Park clubhouse. Jakovic had to know.

“He’d never been in that spot. He’d won and he was obviously a stud, but I looked at him and asked, ‘Were you nervous out there?’” Jakovic said.

The answer then was chilling, “Not at all,” Morikawa said.

“He told me, ‘I have never in my life been in that state in golf,’” Jakovic said. “A state of calm, one shot at a time, visualization, all of that stuff. He said to me, ‘I wasn’t even nervous.’ I can’t wait to ask him the same thing tonight.”

The answer this time will likely be the same. Morikawa certainly never looked nervous on Sunday at Sandwich. Apparently, he’d learned everything he needed to know about links golf a week earlier in Scotland with that tie for 71st and closing 73. As for his rock-solid resolve and uncanny ability to overcome crippling pressure, that never seemed to be an issue.

Collin Morikawa didn't have much time to celebrate his Open victory, but he did manage to put the claret jug to use. 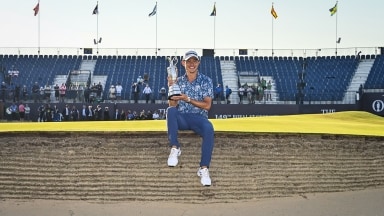 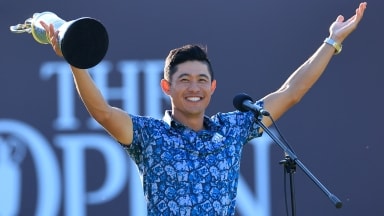 How does Collin compare to today's other stars?

Now that he has two majors, how does Collin Morikawa compare with today's other stars such as Jordan Spieth and Jon Rahm?