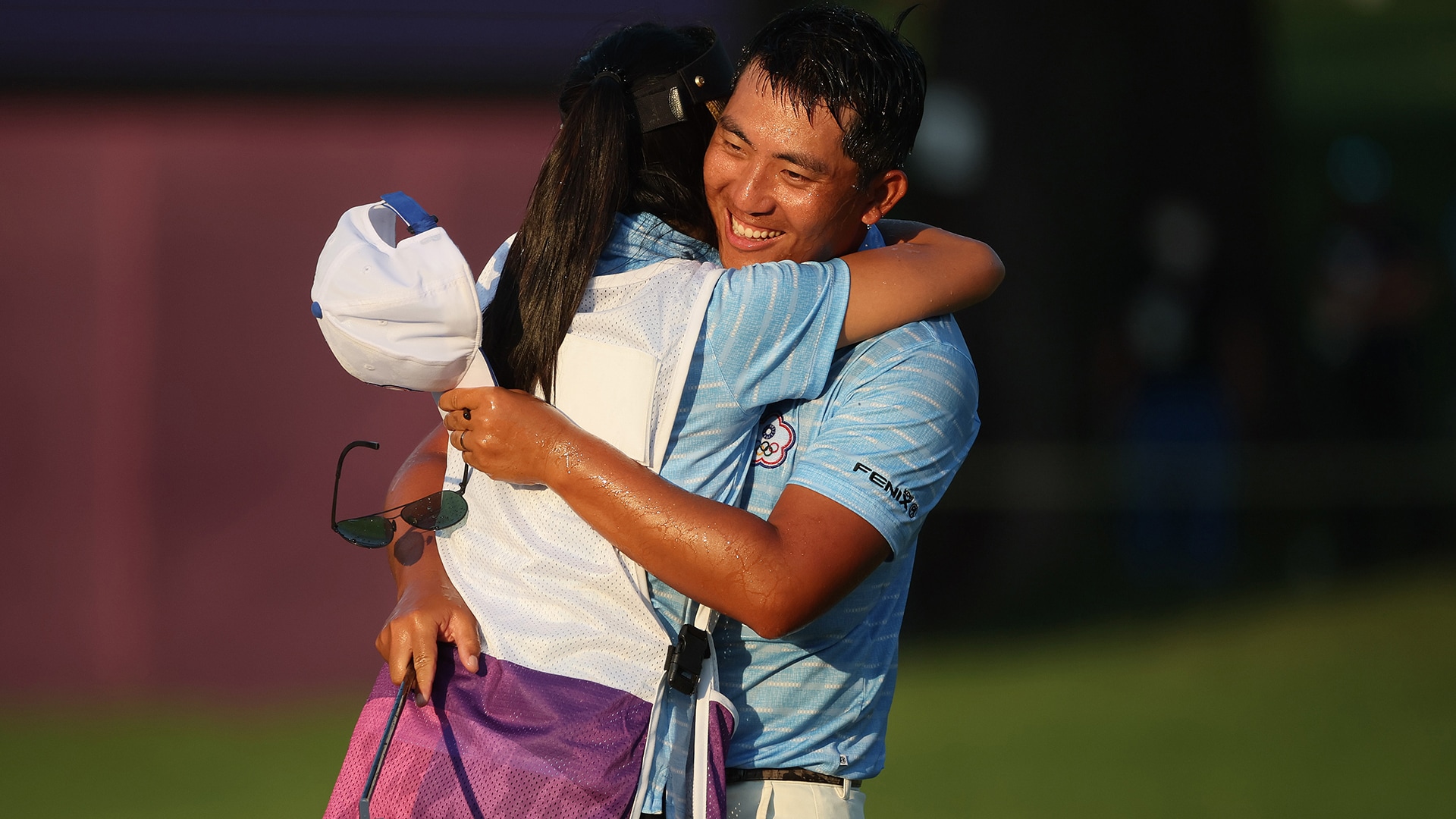 C.T. Pan beat just two players in the opening round of the Olympic men’s golf competition.

Three days later, he only ended up losing to two.

Pan locked up Chinese Taipei’s fourth bronze and eighth overall medal of the Tokyo Games by prevailing as the last man standing in a seven-man playoff Sunday at Kasumigaseki Country Club. Pan’s up-and-down par on the fourth extra hole, the par-4 18th, was good enough to eliminate American Collin Morikawa, who missed his par save after his approach badly plugged in the face of the front greenside bunker.

"Very satisfying," said Pan, who opened his week in 3-over 74. "It can came as a surprise to me, too. After Day 1 ... I remember I texted one of my good friends and I was like, The struggle is real. So, it's quite a turnaround for this week winning the bronze medal that I couldn't even think about it, didn't even think about it after Thursday's round. So, overall that was a very happy ending."

Pan, who with his wife, Michelle, on the bag closed with an 8-under 63, was one of seven players who finished at 15 under, three shots back of gold medalist Xander Schauffele of the U.S. and silver winner Rory Sabbatini of Slovakia.

"Four's the largest [playoff] I've been in," said Rory McIlroy, who was representing Ireland. "So yeah, it was a bit interesting having to split us up there and having to ask the rules official going down the a fairway on 18, Who did what ahead? What do I need to do here? So, a little different, but just add it to another experience that I've had this week for the first time."

In the first playoff trip down No. 18, all four players in the first group – Pan, Morikawa, Colombia’s Sebastian Munoz and Chile’s Mito Pereira – made par. McIlroy also made par in the second group while Great Britain’s Paul Casey and Japan’s Hideki Matsuyama were eliminated with bogey.

After matching pars by the five advancers at the second extra hole, the par-3 10th, the third playoff hole, the par-4 11th, became the site of some clutch wedge shots. Morikawa’s was the best, his ball landing inches behind the hole, but Pereira, McIlroy and Pan all gave themselves great birdie looks.

Munoz went over the back of the green and was eliminated with bogey while Pereira horseshoed out his 10-foot birdie try to also end his medal hopes.

“I can't believe that lip-out just happened,” Pereira said. “It's crazy. I hit a really good shot and it was a perfect putt, and I don't know what happened.”

McIlroy was the next to putt, and he caught the right lip, also missing.

"It's disappointing going away from here without any hardware," McIlroy said. "I've been saying all day I never tried so hard in my life to finish third. But it's been a great experience, today was great day to be up there in contention for a medal, certainly had a different feeling to it than I expected, and yeah, as I said, I'm already looking forward to three years time and trying to go at least one better but hopefully three better."

Pan and Morikawa converted short tries to head back to the finishing hole.

“Normally with five guys with wedges in their hands, two are going to make birdie,” Morikawa said of Pan negating Morikawa’s near-eagle dunk. “It happens.”

Neither hit the green in regulation, but Pan, in the left rough just shy of the green, had a much better lie. Morikawa, from a wicked spot, somehow got his third shot on the green and left himself 30 feet for par, but he couldn’t save par.

Pan was left with a 7-footer to win the bronze, and he didn’t miss.

"I've never been in a playoff with that many people, seven people for one spot, which is pretty crazy," Pan said. "And if you look at the field in the playoff, we got Rory McIlroy, Collin, we got I don't know two, three top-10 guys in the world. And we got me, 200 ranked, shooting [plus-3] on Day 1, didn't know what to do on Thursday. But anyway, I mean I just told myself, just keep my head down, hit one shot at a time and then I just reminded myself just to keep joking with my wife.

"She's great, she's a great caddie, but she definitely keeps the mood very light for me and it helps me to focus more. So, I want to thank her for that."