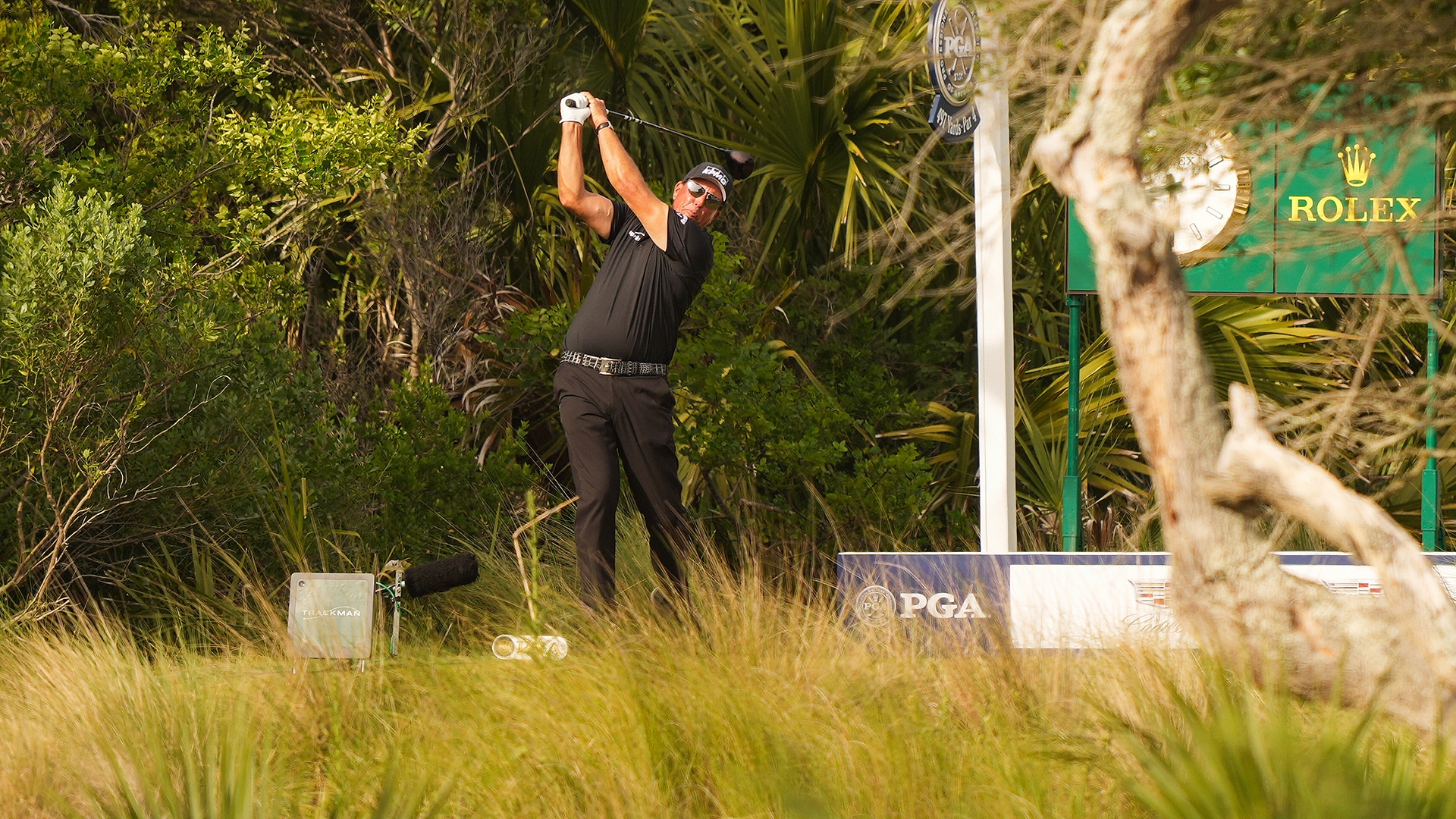 KIAWAH ISLAND, S.C. – There’s only one thing that can derail Phil Mickelson at this PGA Championship, and he knows it.

It’s not the occasional foul ball. It’s not the putter that started to betray him with age, nor is it some boneheaded decision.

No, to hear Mickelson, it’s actually quite simple: It’s the lack of a clear picture. Cloudy visualization. That’s why he’s walking the fairways so slowly. That’s why he’s scanning his yardage book so deliberately. That’s why he’s standing behind his ball for 10 seconds, breathing deeply, flexing his left hand, softly blinking his eyes. Without that intense focus, he’s prone to wandering and miscues and poor shots, and it could doom him. He knows this, so he’s started logging 45-hole practice days and longer meditation sessions to “use my mind like a muscle and expand it.”

But four hours of unwavering focus is a big ask for a 50-year-old on the brink of history. So good for so long Saturday at Kiawah Island – as good as we’ve seen him in the past five years – Mickelson suffered the momentary lapse that he’s worked to avoid. This one was especially costly, blowing open the PGA and bringing back into the mix a pair of major winners, including big, bad Brooks Koepka, the best major performer of the past half-decade. Ahead by five shots at one point, Mickelson came home in 38 and is now just one clear of a revved-up Koepka and two ahead of a relieved Louis Oosthuizen.

“I think we all got lucky that he came backwards into the field,” Oosthuizen said.

Because for about two hours Saturday, this was Mickelson in full flight. Bidding at age 50 to become the oldest major champion in history, there was so much mystery about how he would perform back in the spotlight. He didn’t have a top-10 in a major in five years – or a top-10 in a regular event in eight months – and yet here he was, leading the PGA on one of the most diabolical courses in the world. 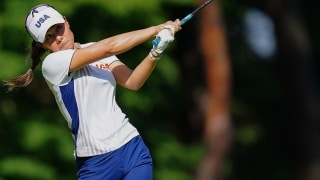 Kang (69) discusses how she psyches herself up

Danielle Kang opened with a 2-under 69 at the Olympics. She talked about how she gets herself pumped to compete.

Surely he’d shrink from the moment, just as he did after an opening 63 at Quail Hollow two weeks ago, and just as he did when only four back at the halfway point at Augusta National last November. Except Mickelson roped a 267-yard long iron to set up a two-putt birdie on 2. Then he nearly dunked a wedge on 3. Then he rolled in a mid-range birdie on 6 and two-putted for another on 7. It was vintage Phil on a birdie blitz, spurred on by the largest major crowd in 21 months.

His pursuers struggled to keep pace. Bryson DeChambeau stalled during a 71. Brooks Koepka battled not just a balky knee but an icy putter. Oosthuizen, meanwhile, seemed shaken by a bad warmup and poor swing off the opening tee. Fighting his driver, he played his first seven holes in 1 over.

“That was probably the worst I’ve played in a while,” Oosthuizen said, “especially the first 10 holes going along with Phil hitting it beautifully and playing great, I was all over the place. I could sense early on that I wasn’t on-song.”

Once Mickelson poured in a birdie putt on 10, it appeared, at least for a moment, like the rout was on. He was five ahead. Only 26 holes remained.

“I felt I had a very clear picture on every shot,” Mickelson said, “and I’ve been swinging the club well, and so I was executing.”

His first poor swing of the day came on the par-4 12th. The 462-yarder played just a shade over par Saturday as most players blew their drive down the left side, into a fairly generous portion of the fairway. But Mickelson tugged his 2-wood, catching one of the bunkers that has seen little action; he was one of only three players to find the sand off the tee. After drawing an awkward lie, Mickelson laid up and couldn’t convert the 30-footer for par. A two-shot swing ensued, with Oosthuizen cashing in on a stuffed approach, his second birdie in a row. All of a sudden, Mickelson’s sizable lead was down to two.

Then came the most pivotal hole of this championship through 54 holes.

Still not fully comfortable with his swing, Oosthuizen sliced his tee shot into the water on the par-4 13th. The only question was whether it crossed the margin of the hazard or if he needed to re-tee; Mickelson said there was little doubt. “It flew down there, and it had a big cut to it,” Mickelson said. “There was no question in my mind from where we were that it crossed way up there.” 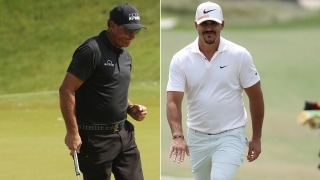 There will be plenty of contender Sunday at the PGA, but Phil vs. Brooks is the highlight. They each have their own battles to wages as well.

With his closest pursuer in trouble, Mickelson could have been forgiven for bailing out left, away from trouble. Almost every player in the field laid back into the same area, leaving about a 190-yard approach into a well-protected green. Once again, he went through his usual routine – breathing, visualizing – and seemed to have a clear vision of what he wanted to hit: a running draw with his 2-wood that chased down the fairway. Only this time, his tee ball snap-hooked so viciously that it didn’t even cross land up ahead. An automatic reload, leading to a double bogey and the loss of the outright lead.

Watching the action unfold in the scoring tent, Padraig Harrington wasn’t surprised. “Phil would refuse to hit it in the left rough because that would be weak,” he said. “Hitting it down the water line is not weak – it’s the brave shot. OK, it didn’t come off, but he’s not going to back down. He’s going to hit the shots and take it on.”

Harrington apparently exuded more confidence than Mickelson, who seemed dazed as he walked off the green.

“It’s just an example of losing the feel and the picture of the shot,” he said afterward. “I get a little bit jumpy, a little bit fast from the top, and when that happens, I get narrow and I end up flipping it. So those two swings were more a product of not staying or keeping the feel and the focus of the shot. So that’s just a small little thing that I need to iron out.”

Said Oosthuizen: “Phil hit two bad tee shots and cost him three shots. Other than that, he played beautifully.”

Mickelson posted five consecutive pars to close, but he nearly blew his tee shot on 16 onto the beach and needed to curl in a 5-footer on the last to preserve his narrow lead. Speaking to the media afterward, it was clear the shot (and lack of focus) on 13 had rattled his confidence, as he knew it would. He tried to end the presser early but was called back by a final question. “Last one,” he said, “because I don’t have much daylight.”

A minute later, at 7:35 p.m., he was strapping on his glove as he walked onto the range, where caddie/brother Tim and swing coach Andrew Getson were already waiting. They used the badge on Getson’s yellow lanyard to investigate the face of Mickelson’s fairway wood and wound up swapping out the head. “It just got ratty out there,” he said. Then he ripped 2-wood after 2-wood, five, 10, 20 of them, the giant scoreboard spitting out ball-speed numbers (170 mph) and carry distance (270 yards).

Mickelson moved quickly, efficiently, swinging with conviction. In the fading daylight, with the range nearly to himself, he had a clear picture, all right. It was of him holding the Wanamaker Trophy.