Competing in Masters, Aaron Jarvis looks to lift up the island that first lifted him 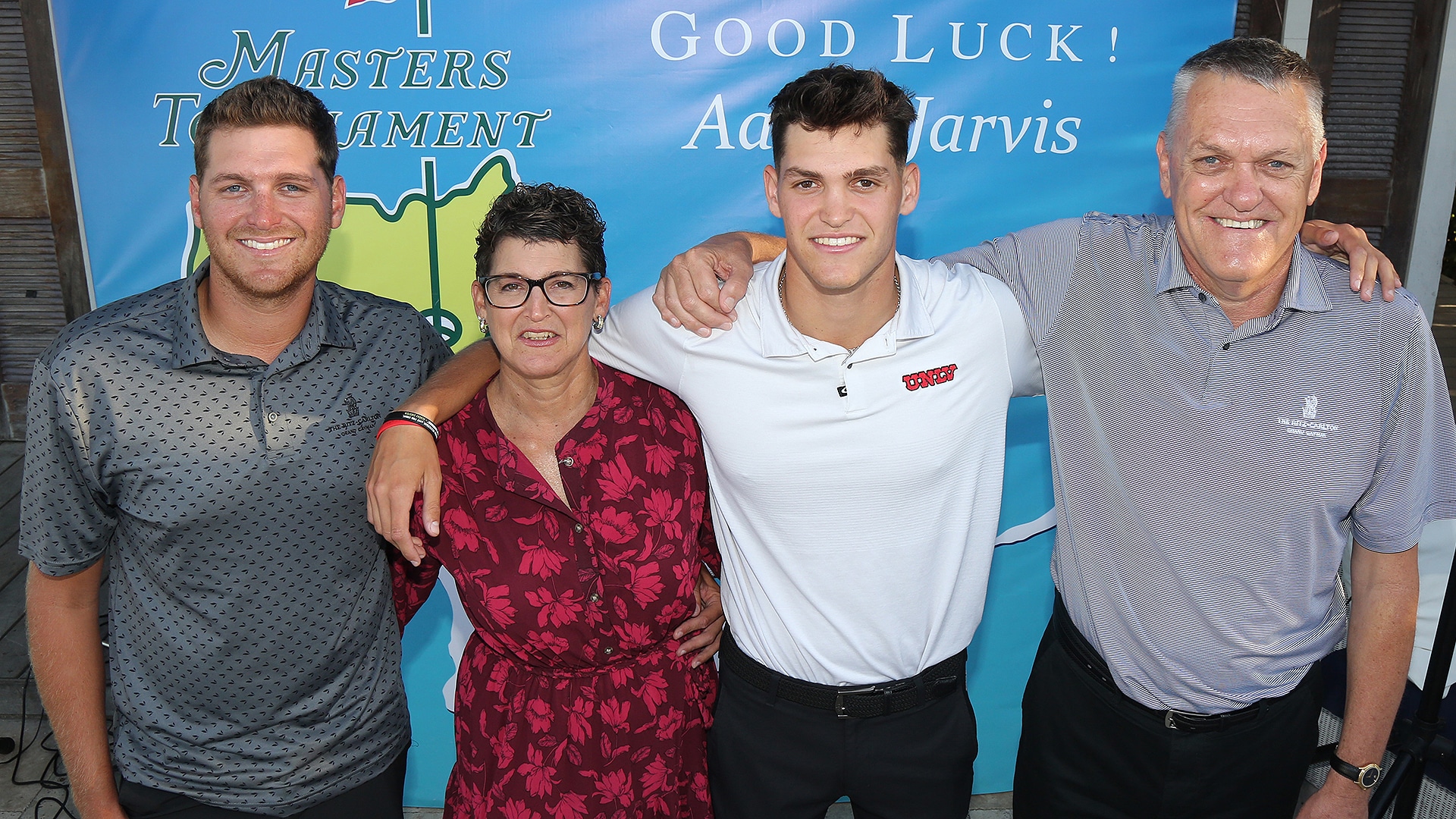 It may read like a compliment, but it’s not. On-course comments from big brothers seldom are. For the second time on the front nine, Aaron Jarvis, 19, has left a makeable putt a foot short on the smooth, not-so-fast greens on the golf course that helped raise them: North Sound Golf Club, the only 18-holer in the country.

Andrew Jarvis, 23, is the one doing most of the ribbing, per usual. Besides me, our fourth, Payten Wight, 27, joins in from time to time as well. Good-naturedly, of course. Besides, the kid can handle it.

Aaron makes no aggressive response. He just wears the smile of someone who loves the game so much that nothing anyone says can curb his enthusiasm. The warm, blustery March morning on the west side of the island of Grand Cayman matches the casual mood of the round perfectly.

And the fun is just beginning. The young Caymanian prospect has earned the opportunity to do something no one from his country of 72,000 people and just 27 holes of golf has done before: compete in the Masters and the Open Championship.

In January, Jarvis roared back from three strokes off the 54-hole lead to win the Latin American Amateur Championship, an event that in just seven years has energized the competitive golfing populations of big regional countries like Argentina and Mexico, as well as smaller and lesser-known nations like the Cayman Islands.

If you’re a competitive golfer from this part of the world, the LAAC’s importance is difficult to overstate. In just seven years, it has given thousands a clearer sense of a potential path to professional golf than ever. And its initial alumni have shown tremendous promise. Witness Chile’s Joaquin Niemann, who won the 2018 LAAC and now has two PGA Tour wins to his credit, including the 2022 Genesis Invitational.

In addition to making national sporting history, Aaron Jarvis is the first native of any Caribbean country to win the LAAC. In addition to his two major championship starts, he will be exempt into Final Qualifying for the 2022 U.S. Open.

The first trait to notice about Jarvis is a sense of steadiness and maturity beyond his 19 years. He is thoughtful, well-spoken and has an island accent – think Jamaica, mixed with Southern Californian rhythms – that makes his voice easy to remember. But the exuberance that comes from being a talented young athlete from a place most consider a paradise is undeniable, too. So is the effortless, 320-yard-plus power from his wiry frame, a must-have for any aspiring pro these days.

Talking with him throughout our round revealed a distinct lack of pretense and full awareness that he has much to learn. I asked where his game needs most work. “For me, it’s always been ball-striking, consistency-wise,” he said. “I know how to score pretty well, even when I’m not hitting it good.”

What was it like when the enormity of his LAAC victory – and all that accompanies it – dawned on him? “It was insane,” he said. “All the texts I got – it took me like two weeks to get back to everyone.”

Jarvis’ official Masters invitation came to his parents’ home in the Cayman Islands, so he had to wait a few extra weeks to see it in person. He sums up that moment with personality-appropriate understatement: “Pretty sweet.”

A freshman on the golf team at the University of Nevada-Las Vegas, Jarvis is eager to learn from alums who play the game at the highest level. “He’s so chill,” Jarvis says of former UNLV star Ryan Moore, with whom he spent time recently at Shadow Creek, the Runnin’ Rebels home course.

Jarvis sought Moore’s advice on handling the weight of Masters pressure for the first time. “He told me, ‘Don’t let the whole environment distract you; go out there and still play your game and do your thing,’” Jarvis said. “He’s so relaxed all the time, so it was a really good connection we had, that hopefully we can build going forward.”

Jarvis is also eager to learn from former UNLV player and 2013 Masters champion Adam Scott, hopefully in a practice round.

“TV doesn’t do it justice,” Jarvis said of his first impressions of Augusta National Golf Club, where he has had time to get in a few reps in advance of the Masters. “The elevation change and the way the greens are sloped are insane, so it’s going to be pretty cool.”

Pretty cool. Jarvis’ chill, even in anticipation of such a big moment, speaks to his humility.

Another sign: his willingness to give credit to those around him for their roles in his success.

It seems unlikely, to say the least, that the Cayman Islands could produce a player who can compete with the best young golfers from countries like Mexico and Argentina. But Jarvis is not the only high-level amateur to hail from this paradise. Therein lies the secret. 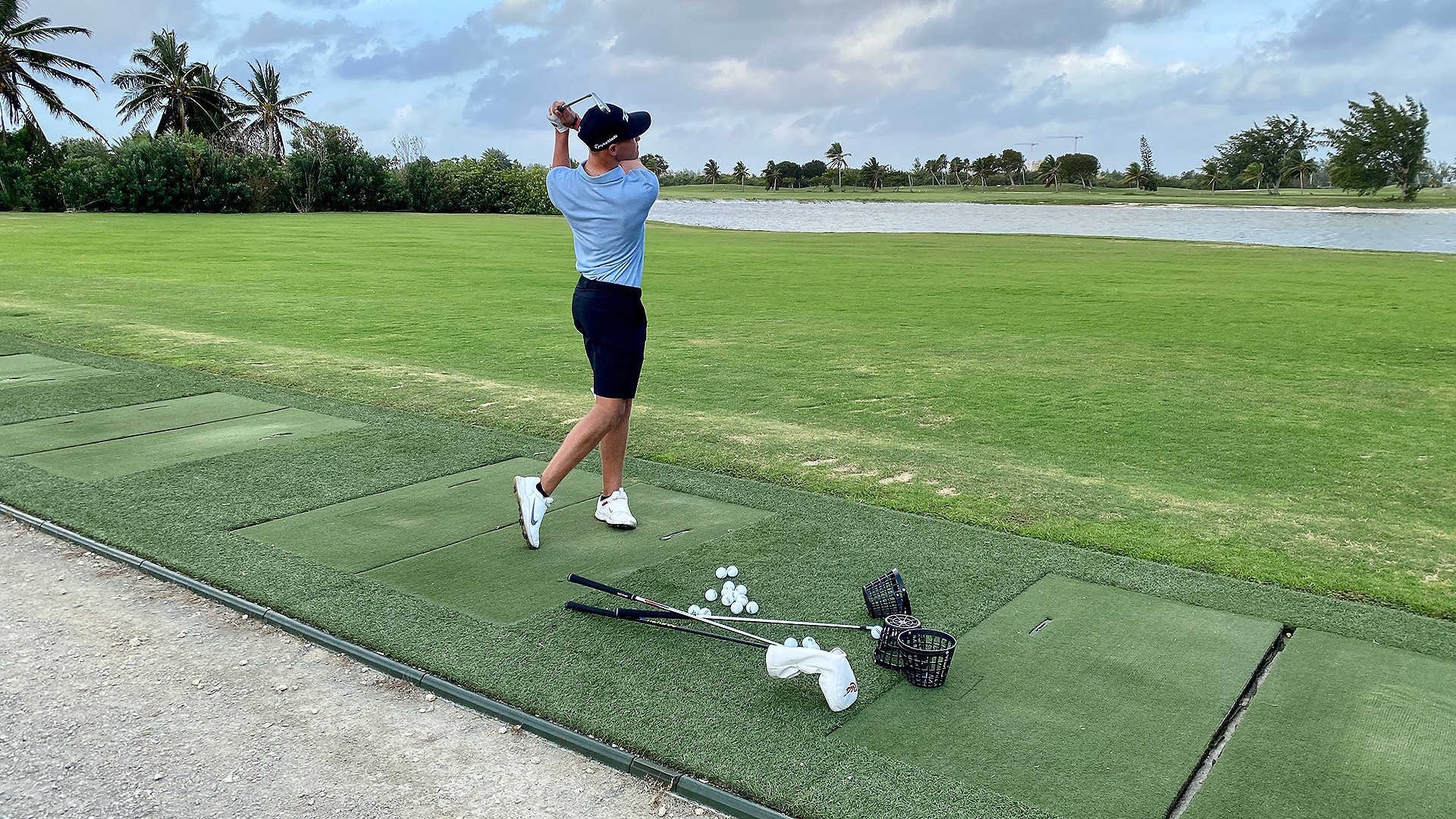 A small but emerging golf powerhouse

“They had the Caribbean Junior Championships here in 2013, back in the day, and my brother [Andrew] was playing. My dad was like, ‘Come out and watch,’ and I saw my brother play, and that’s how I got into the game,” said Jarvis.

“From there, the older guys like Payten and some of the guys on the men’s [national] team just brought me in. Having fun with these guys out here kept me loving the game, and from there I started getting better and taking it more seriously.

“They would beat me most of the time, which would almost fuel me and give me a goal to reach and gave me a little fire to burn. They gave me extra motivation to get better each and every day.”

Elite golfers don’t simply sprout up out of nowhere – not in a place like this. It takes passion and commitment from members of the golf community to create conditions for talent to flourish.

One of those figures is Paul Woodhouse, a native Scot who has split time between St. Andrews and Grand Cayman for 20 years. He is a past president and current board member of the Cayman Islands Golf Association.

Woodhouse said the current wave of strong Caymanian golfers can be traced to 2013, when North Sound hosted the Caribbean Junior Championships. He helped start up a junior program.

“They were tiny, they hadn’t played much, and we were hosting the Caribbean Junior Championships and we didn’t really have a team,” Woodhouse said. “So they started from nothing, and inside of about six or nine months, got themselves up to playing decent golf, good enough to get out on the course. They acquitted themselves well, and from there it just grew and grew.”

A lifelong golfer himself, Woodhouse knows that the game has much to offer beyond just potential fame and fortune. “Golf is a passport to life,” he said, “and that’s exactly what we’ve seen, particularly most recently with Aaron. The opportunity that’s now come his way through a lot of hard work is fantastic.”

Ollie Riding is the director of golf at the nine-hole Ritz-Carlton Golf Club, located next door to North Sound. It’s the Cayman Islands’ only other golf course besides North Sound. A native of Curaçao in the southern Caribbean, Riding is an accomplished player in his own right, having played professionally all over the region before postings as a head pro in places like Acapulco, Mexico and, since just before the pandemic, Grand Cayman.

Gregarious and outgoing, Riding is full of stories and a master at telling them. He also just plain adores the game. A minute in his presence is all it takes to see how popular he is among the island’s young golfers, whom he loves to mentor and support.

“You want to create golfers for life and people who play the game,” Riding said. “But then, if you’re lucky, like the Cayman Islands has been very lucky,” a player like Aaron Jarvis comes along and helps raise awareness for the game and his country at the same time, he said. “For a population of 72,000 people, there’s a lot of golf talent.”

“Paul [Woodhouse] was the driving force behind developing more junior golf,” Riding said. “Now we have the wave of Aaron’s success that we need to take advantage of, work on it, and that will create the next wave.”

People like Woodhouse, Riding and others have wrung every drop of support potential out of the Cayman Islands’ golf complement, and their young charges have responded. Payten Wight stands at the beginning of the country’s recent competitive golf boom. He played college golf in the states at Saint Leo University, near Tampa, Florida, and leads all Caymanian golfers in LAAC appearances with four. He has won the Cayman Island Championship twice.

Andrew Jarvis owns the competitive course record of 64 at North Sound, and his own initial appearance in the Latin American Amateur Championship in 2016 inspired Aaron along his own journey in competitive golf.

Andrew remembers Aaron’s telling reaction to his record round in 2019. “I went and shot 64 in the first round and was leading Aaron by six,” he said. But Aaron responded the second day. “He was one behind after ten holes. That’s when he gave me a bit of a scare. I was like ‘He can’t beat me now.’”

Andrew held off a charge from his younger brother that year, and repeated the feat in 2022 for his third island championship title. Aaron will have to wait for 2023 to get his first, although the Masters and Open Championship appearances will give him household bragging rights forever.

Justin Hastings is Aaron’s age and is a freshman golfer at San Diego State. Hastings has his own piece of Cayman golfing history: in 2018, he became both the youngest player to compete in the LAAC and the youngest to make the cut. When Aaron won this year’s event, Justin notched a top-25 finish, marking the first time both Caymanians in the field had played all four rounds.

And there are more Caymanian players coming. Danny Lyne, a lanky 14-year old, finished third in the Cayman Islands Championship behind the Jarvises and seems to have a bright future as well.

If you want to get better at something, it helps to have stiff competition whom you constantly want to beat. It helps even more when those players are your close friends, equally willing to rib and root for one another.

Andrew Jarvis, Payten Wight and others will be making the trip from the Cayman Islands to Augusta to cheer on Aaron. No matter what he shoots, he will have planted a new flag on the world golf stage.