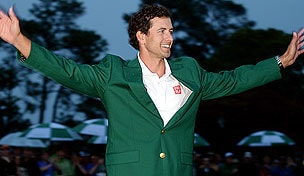 AUGUSTA, Ga. – It is Monday in Melbourne, but all of Oz awoke to an unofficial, impromptu holiday.

Australia’s long Masters nightmare ended on a rainy Sunday. On a day ready-made for a duck, Adam Scott outlasted Angel “El Pato” (The Duck) Cabrera to end the “Aussie Duck,” the cricket term that means zero, which was the grand sum of green jackets collected before Sunday’s wet and wild finish.

If there was any doubt as to the significance of Scott’s victory, consider Craig Heatley’s emotional introduction of the champion to the media following his playoff title bout.

“When I heard the roar down on (No. 10), a second later I heard about 30 million people in Australia and New Zealand all cheering,” said Heatley, an Augusta National member and native of . . . wait for it, New Zealand.

With near flawless ball-striking and clutch putting Scott completed the Anchoring Slam – following in the footsteps of Keegan Bradley (PGA Championship), Webb Simpson (U.S. Open) and Ernie Els (British Open) – and just in time as the USGA and R&A seem poised to rule on long putters before the end of the spring.

Photos: Scott through the years

This one was for Oz. This one was for Greg Norman, the symbol of Australian fruitlessness at the Masters and Scott’s mentor. In 2011, with Scott struggling with his swing and psyche, Norman took a flyer and made him a captain’s pick for the Presidents Cup.

“Greg as the captain had a lot of faith in me and made me a pick,” said Scott, who closed with matching 69s on the weekend. “There is no hiding in a Presidents Cup and I used that as a real motivator and a way to make myself believe I was a great player again. It was a really big boost for me.”

Even a crushing defeat last year at the Open Championship, when he closed with four consecutive bogeys to lose by one stroke, did little to rattle Scott’s newfound confidence and when he began the day one stroke off the lead he knew redemption was at hand.

Scott began his final round with a bogey at the first and was flawless the rest of the way, pulling into a tie for the lead when fellow Aussie Jason Day bogeyed the 16th hole and pulling away with birdies at Nos. 15 and 18 to finish at 9 under and force extra holes for the second consecutive year at Augusta National.

If Scott’s victory was historically significant in Australia, it also proved to be something of a myth buster at Augusta National. He finished tied for 39th for the week in putting, although he did have just two three-putts, but first in greens in regulation.

Turns out the “Putting Contest” is a second-shot test.

Statistics aside, for Scott the most important thing was what his victory meant back home.

“I’m a proud Australian and I hope this sits well out home,” Scott said. “We’re a proud sporting country and we like to think we’re the best at everything. . . . Part of this is for (Norman) because he’s given me so much inspiration and belief.”

Norman is the epicenter of the nation’s passion and pain when it comes to the year’s first major. The Shark is a three-time bridesmaid at the Masters, including his 1996 meltdown after leading by six strokes through 54 holes only to post a closing-nine 40.

The weight of a nation has buckled more than one Aussie since, including Day, who stormed into the lead with a birdie-eagle start on Sunday. The 2011 runner-up at Augusta National pulled two strokes clear with a birdie at the 15th hole but finished with bogeys at Nos. 16 and 17 and alone in third place.

“There was an enormous amount of pressure on my shoulders but I played pretty good today,” Day said. “People don’t understand what kind of pressure there is.”

The four-time champion came up one bad bounce and a bad drop short, literally, and finished four shots back, nearly within the margin of error that added up to a triple-bogey-8 on the 15th during Friday’s second round.

Woods received a Masters mulligan on Saturday, via the club’s curious decision to forgo the prescribed disqualification for signing an incorrect scorecard after he took an incorrect drop on the 15th, but not his fifth green jacket.

Woods has now played 15 majors since his last Grand Slam victory, the same number that now taunts him in his quest to catch Jack Nicklaus’ Grand Slam haul.

He used to win majors with his C-game; now he seems to struggle closing the deal when it counts with his A-game, which is what he appeared to have entering this week.

Woods had three signature victories at Torrey Pines, Doral and Bay Hill and, more importantly, was leading the Tour in putting heading down Magnolia Lane. At no time over the past five years have the stars been so perfectly aligned to wrest himself off his Grand Slam schnied, yet major No. 15 continues to elude him.

“You can do 'what ifs' in every tournament you lose,” said Woods, who closed with a 70 and finished at 5 under. “It’s just the way it goes; I played this week the way I played all year.”

By contrast, Cabrera’s week was every bit an anomaly. The Argentine hadn’t posted a top-10 finish in a PGA Tour event since the 2011 McGladrey Classic and there was nothing to suggest he was trending in the right direction, other than the fact that this was a major.

Cabrera pulled away from the field with a birdie at No. 7 and matched Scott with an approach to 3 feet for birdie at the 18th hole. He was equally solid in the playoff, nearly chipping in for birdie at the first extra frame and narrowly missing a 15-footer at the second OT hole for birdie.

Following Scott’s meltdown at Royal Lytham he received a not entirely unexpected phone call from Norman. If anyone knew how to deal with heartache, it was the Shark.

“I said to him, ‘You played better golf than anyone for 69 holes and take that as a positive,’” Norman said late Sunday on Golf Channel. “He knew minor fluctuations can create a major disaster. But he knew he had the capability to go on and win major championships.”

That he started with the one that means the most to Australia, and Norman, only made it that much more profound.

By the time Scott slipped his arms into the green jacket that had eluded his nation for so long the rain finally let up. So did the cloud that had been looming over Australian golf.