Shall we press on? After all that, Noren, Day not done 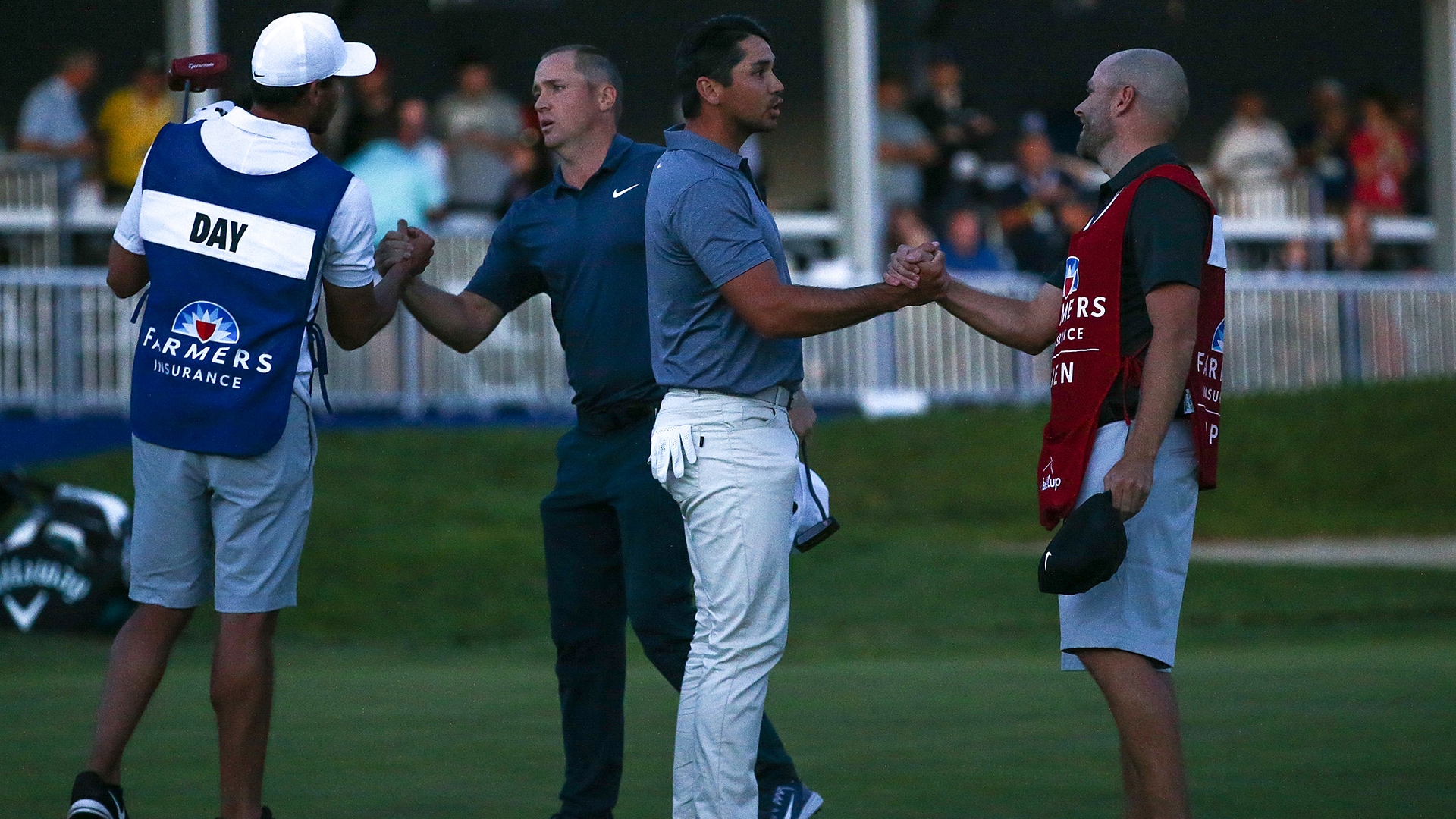 SAN DIEGO – Alex Noren waited six hours in the final round. Four minutes and 10 seconds in the last fairway. Another hour and a half to play five extra holes.

Hey, at this point, what’s another night?

Noren and Jason Day dueled for five playoff holes Sunday, with no conclusion. They’ll return at 11 a.m. ET Monday, and that’s just as well – both playoff participants need a good night’s rest to comprehend all that went down at Torrey Pines.

The Santa Ana winds finally arrived in the final round, turning the tournament upside down and grinding pace of play to a halt.

With 30-mph gusts and tucked pins on an already-tough course, there were multiple-group backups on the front nine. Lengthy rulings ensued when shots flew off-line and into the canyon. The final group of Noren, Ryan Palmer and J.B. Holmes fell a hole behind on the back nine and, with the tournament on the line, came to a complete standstill.

With 239 yards to the flag on the par-5 finishing hole, needing an eagle for a shot at a playoff, Holmes was in between his 3-wood or 5-wood, neither of which, he said, he hits particularly well. So he deliberated. For four minutes. All the while Noren, needing a birdie to win in his first start as a PGA Tour member, stood by his bag and waited, and waited. It was golf’s equivalent of icing the kicker.

After all of that deliberation, Holmes chose to merely lay up, with a 7-iron. (Poorly, too, as his second shot found the rough.) Noren had more than enough time to pick between 3-wood and hybrid, and from a downhill lie he opted for more club. His second shot rocketed over the green, five-holing the 18th-hole grandstand, rolling down the makeshift path and settling next to the walkway.

After a free drop, he couldn’t get up and down for birdie, sending him to a three-man playoff with Day and Ryan Palmer, who birdied the 72nd hole.

Tour players and fans fumed on social media at what appeared to be an egregious lack of sportsmanship by Holmes, especially with the tournament on the line. Asked afterward if he had any regrets about taking so long to play, Holmes sniffed: “No, I’m still trying to win.”

Noren spoke cautiously in a post-round interview, when pressed whether the long wait affected his second shot. “Not necessarily,” he said. “It probably made me switch clubs.”

Palmer exited the playoff first, but Noren and Day traded spectacular shots in overtime, even in fading daylight.

They both birdied the first two playoff holes, then Day had the best look on the third extra hole, after his tee shot flew over the flag on the par-3 16th.

Indeed, from 11 feet away, Day seemed on the verge of repeating his playoff performance here from 2015, when he won on the third extra hole. But this time, his birdie putt crept over the right edge and stayed out.

“I actually thought I had it,” he said.

Both players made par on the fourth playoff hole, and the sun had already set by the time they reloaded on the 18th for the fifth playoff hole.

Noren found the green with his second shot and needed to two-putt from 40 feet. Day said he couldn’t even see the flag for his third shot, but his ball came to rest 6 feet behind the pin.

In near-darkness, Noren said he relied more on past experience than his eyesight to hole his left-to-right slider.

“If we had more sunshine it would be nice to finish,” Noren said, “but it’s better this way than maybe missing a short one when you can’t see.”

His Monday workload may be 15 minutes, or perhaps another hour and a half.

Whatever it is, for a PGA Tour title, it’ll be worth the wait.