CHARLOTTE, N.C. – For Max Homa and his foursome teammate Tony Finau, the 15th hole had a little bit of everything – disappointment, luck, skill and, eventually, relief.

The American duo was tied with Taylor Pendrith and Mito Pereira on Day 1 at the Presidents Cup when Finau’s drive found a bunker right of the 15th fairway and Homa’s approach shot sailed left and toward the creek that hugs the green.

“I tried to hit a low cut, and it came out straight,” Homa said. “I don't know what it hit, but I appreciate it.”

Homa’s shot bounced off a rock inside the penalty area and into the rough about 40 yards short of the green, leaving Finau with an impossibly difficult chip.

“I can't explain how hard Tony's shot was. He had a poor lie, and there was very little real estate for him to land it where it would stay on the green even,” Homa said. “I was prepared to chip or maybe hit a bunker shot next. He somehow gave me 10 feet, and I fortunately made it.”

The par save kept the Americans tied with the International team and set a 1-up triumph to complete a dominant day for the U.S. team with victories in four of the day’s five matches. 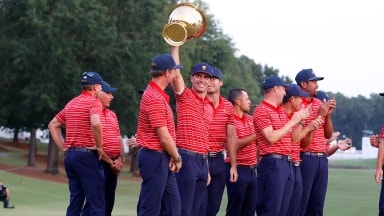 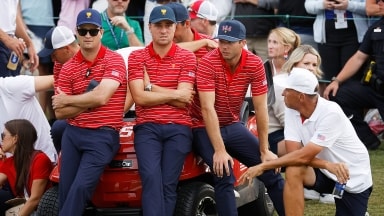