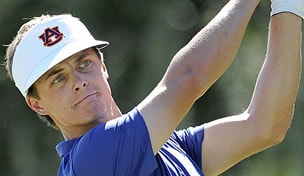 After controversially disqualifying himself from the first stage of PGA Tour Q-School last year, Blayne Barber will finally make his first career start at this week’s Northern Trust Open.

Barber posted a 7-under 65 to earn medalist honors at the Monday qualifier at Industry Hills GC.

Last year, the Auburn graduate easily cruised into the second stage of Q-School, retaining a chance of earning at least some status on a PGA Tour-sanctioned circuit. However, days after completing his final round, Barber believed he may have brushed a leaf in a hazard during the second round and given himself an improper penalty. His disqualification meant he received no status on any major tour.

Since then, the former Walker Cup team member has been competing on mini-tours, winning multiple times in recent months.

He also announced via Twitter that he has received an exemption into the upcoming Puerto Rico Open, also on the PGA Tour.

Robert Streb, Cameron Beckman and Scott Harrington rounded out the players who will compete at Riviera thanks to the Monday qualifier.