After volcano's devastation, what will become of La Reunión? 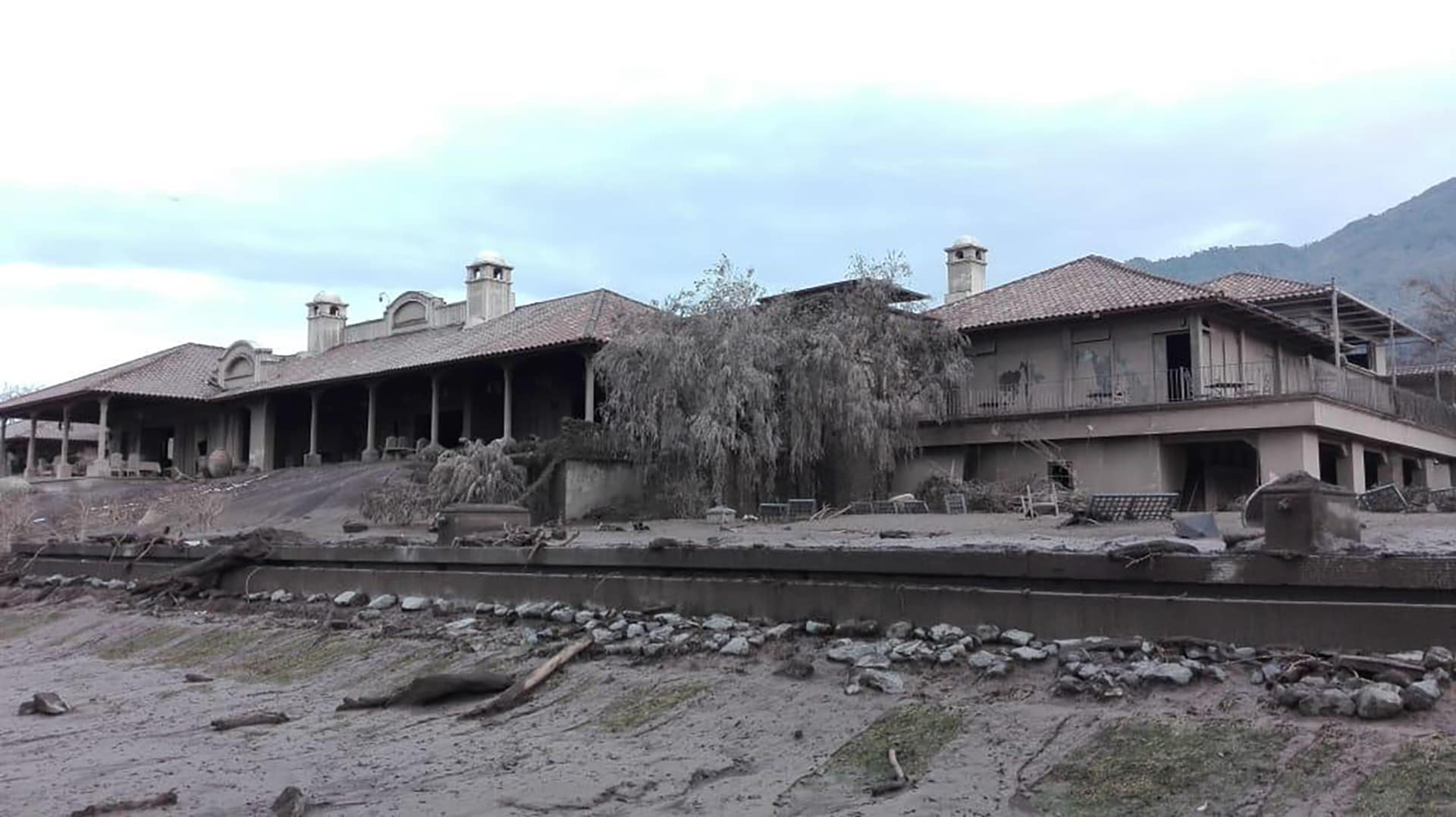 Photo courtesy La Reunion
“Mother Nature was cruel.” - Mario Navarro, the director of golf at La Reunión Golf Resort, on the June 3, 2018 volcano that devastated his community in Guatemala.  -

LA ROMANA, Dominican Republic — Mario Navarro was in Houston when he got the call.

Although the family makes its home in Guatemala, the Navarros were all in Texas, where their 7-year-old daughter, Ada, was undergoing treatment for medulloblastoma, a brain tumor.

Navarro, the director of golf at La Reunión Golf Resort located just outside of Antigua, fielded a call from the club, where a group of golfers were asking for a discount on their green fees. A few hours later, he called back to see if the situation had been resolved.

“Yeah, the problem has been resolved,” he was told. “We’re evacuating.”

“And then,” Navarro remembers, “I got the text that there was lava flowing on hole 16.”

On June 3, 2018, the Volcán de Fuego began a sudden volcanic eruption that officially claimed the lives of at least 194 people in Southern Guatemala. Hundreds more remains technically missing, but local community groups have told news outlets the real number is in the thousands.

“Obviously, it all comes down to loss of life,” said Navarro, seven months after the tragedy. “The government says it’s 200, but it’s more than that.”

Two of the three towns that bordered La Reunión and sat at the base of the volcano – San Miguel Los Lotes and El Rodeo – were devastated. The third – El Porvenir – was spared, but all three areas have been deemed a high-risk zone by the Guatemalan government.

In the addition to those who lost their lives, other local residents lost their livelihoods when La Reunión was destroyed by dirt, ash, mud and lava rock.

“People lost their lives, and others lost their way of life," Navarro explained at the Latin America Amateur Championship, where six Guatemalan golfers whom he coaches are in the field. "They were dependent on the club. It was everything. Ninety percent of the workers in the club lived in those two towns.

La Reunión opened in 2008. The stunning Pete Dye design, named Fuego Maya, was kept in pristine condition and featured 200 meters of elevation change. Members and guests played an estimated 7,000 rounds per year at La Reunión, one of just seven golf courses in Guatemala.

“La Reunion, when it started, was a very ambitious project, with this vision to create a golf course in the middle of the volcano,” said Alejandro Villavicencio, a 39-year-old former professional who had his amateur status reinstated in 2010 and continues to represent Guatemala in international amateur play. “It was a world-class project. I’ve been to golf courses all over the world and I’ve never been in a place that felt that way.”

Villavicencio was one of the first to play Fuego Maya, before there were even tee or yardage markers. In the nearly 10 years it was open – the club was set to celebrate its 10th anniversary last November – he came back to La Reunión as often as he could. He would take his family and stay with a friend who owned one of the properties on site. He even won a couple of tournaments there.

He always heard the volcano rumbling. Everyone did. Minor volcanic activity was a daily occurrence.

“You would just hear it bang,” Villavicencio said. “I often thought it was thunder. A lot of time you would see the smoke, but you never actually believed it was going to happen.”

More than something that was feared, the volcano, which hadn’t had a strong eruption since the 1970s, was part of the resort’s charm.

“There were always eruptions,” said Navarro, who is originally from Mexico but moved to Guatemala when he was hired at La Reunión in 2013. “In the five years I was director of golf there, we had three evacuations. Heavy ash clouds, but never, never any pyroclastic material or lava flowing down. …

“The golfers that played there on the PGA Tour Latinoamérica certainly enjoyed the volcano always saying 'hi' in the morning, making a boom sound and stuff like that. But that in itself got washed away in a minute.”

When it did, Villavicencio was about 45 minutes away, at his sister’s house. He was aware of what was happening, but the true measure of the devastation didn’t hit him until he began receiving pictures via WhatsApp.

“It looked fake. It looked Photoshopped. You couldn’t contemplate what was happening,” Villavicencio said. “It was just so unreal. It felt like a scene from a movie.”

He hasn’t been able to go back – only property owners have. One of those owners is his aforementioned friend, Martin Modai, whose house remains intact.

“But there’s nothing else left there,” said Villavicencio. “They’ve been able to get in and they sent me some pictures last time. … You can still see the flags in the holes in the positions they were in. It brings tears to my eyes every time I see it, and I realize we’re not going to be able to go back.”

In addition to the loss of life, the resort and golf course were destroyed. Ten of Fuego Maya’s holes are under ash and rock. La Reunión’s clubhouse and hotel suffered a similar fate. Those who have been back, and those who have just seen the pictures, keep saying the same thing: It looks like a war zone.

Navarro tried leaving Houston to return to Guatemala, but he was unable to fly back the day after the eruption; the airports were closed, with so much ash still in the sky. It took him another 48 hours to get back to Guatemala.  Nineteen days later, he finally made it to La Reunión.

“It’s amazing how little we are. In a split-second, everything can change. The property right now is totally devastated,” said Navarro.

“The clubhouse, my office, where people worked, the restaurant, where my kids played, where all our kids played — it’s really hard for it to be the way that it is right now.”

Of those who worked at the golf course, Navarro says La Reunión lost one member of the course maintenance staff and another part-time worker. Others lost caddies, friends, family and children.

In the months since the eruption, the La Reunión Foundation has raised $270,000 for local relief efforts. That sum includes a donation from the PGA Tour and $30,000 raised by 32-year-old Web.com Tour pro and Guatemala native Jose Toledo. Each year, Toledo hosts a holiday fundraiser for children, but this year he's focused his charitable efforts on disaster relief. Funds raised through the foundation are meant to help families rebuild homes elsewhere, although the sum is clearly not enough. An additional $550,000 worth of food and supplies has also been donated.

Another club, El Pulté, two hours from La Reunión, hired 10 members of the golf-course staff and a handful of its caddies. The city of Antigua found jobs for the former hotel employees within two months, and members of the maintenance crews took up work as private gardeners.

While there has been assistance, “there are still people living in the shelters,” says Navarro. “And it’s been six months now.”

The question now is whether La Reunión should be or even could be rebuilt. It would take tens of millions of dollars to rebuild the resort, the primary economic driver for the surrounding villages, and that doesn't include any of the cleanup.

“There is a heart and a will to do something,” Navarro said, “but it’s going to be really hard.”

“Right now, they’re still in the phase of evaluating what’s safe or not. There’s really good enthusiasm from some people to rebuild and at least have some holes open. [Some of the] homes are intact. The hotel will be luckily rebuilt and stuff like that. But it’s certainly going to be a big, big endeavor for the owners to start over again. They are trying to do what they can in the best manner that they can.”

But then there are the obvious problems: Would people, knowing what happened, ever go back? And what if the volcano erupts again? Would it all be for naught?

Volcán de Fuego was once again spraying lava and ash into the sky as recently as November.

“I don’t know if people are going to want to go back,” said Villavicencio, a regular at La Reunión. “It’s an active volcano. It’s scary. I don’t know if you could get any sleep there.”

And then, of course, there is the little girl mentioned at the beginning of this story, who underwent surgery in Boston, who received radiation and chemotherapy in Houston at MD Anderson and Texas Children’s Hospital, respectively.

Nearly a year after she was first diagnosed, she was able to ring the bell at Texas Children’s, marking the end of her treatment.

She’ll still be going back for follow-ups, every three months, and then every six months, and eventually every year.

Shortly before the volcano erupted, Navarro was offered his current job as technical coordinator and head coach at the Guatemalan National Golf Association, where he oversees training sessions for roughly 40 juniors and a few professionals. He anticipated being able to do both jobs, but the volcano cut his options from two to one.

Although he isn’t from Guatemala, Navarro is proud to represent the country as its coach. And as the six Guatemalans at the LAAC represent their country, they also play for all those impacted by the volcano’s eruption.

“In the back of their mind,” Navarro believes, “when they see me, now that I’m the head coach the Guatemalan team, they certainly keep it to heart.”

These days, Navarro is commuting about two-and-a-half hours per day to Guatemala City. Navarro and his wife, also named Ada, are still living in Antigua with little Ada and their other child, Mario, age 6. It was Ada’s oncologist who recommended they stay where they are, so that she could have a sense of consistency in her recovery, being back at school with her friends.

Every time Mario discusses Ada, he expresses how grateful he is for her health and mentions how appreciative he is to everyone –  from the U.S., Mexico and Guatemala –  who contributed to his daughter's treatment. Having spent so much time in cancer wards in the last year, he knows his family is one of the lucky ones.

And then, there’s the conversations he has when he’s back in Guatemala.

“Here are these people losing everything, family members and everything, and they still had the time to ask me how everybody is doing.”