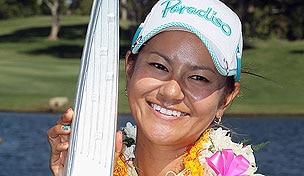 KAPOLEI, Hawaii – Japan's Ai Miyazato won the LPGA Lotte Championship on Saturday for her eighth career LPGA Tour title, birdieing three of the last six holes for a 2-under 70 and a four-stroke victory.

Miyazato finished at 12-under 276 at wind-swept Ko Olina. She opened with rounds of 71, 65 and 70 to take a three-stroke lead into the final round.

Meena Lee, who was ahead early on the back nine and tied for the lead after a birdie on No. 15, had a 70 to tie for second with Azahara Munoz at 8 under. Munoz finished with a 70.

The 26-year-old Miyazato made a 30-foot birdie putt from the fringe on the 15th to break a tie with Lee. Lee, down one playing 18, then hit her approach into a bunker and three-putted from 30 feet for double bogey.

Miyazato lost the lead with a bogey on the par-3 12th after her tee shot buried in a bunker, the second straight day she carded a 4 on the hole. But Lee dropped back moments later with a three-putt bogey at 14.

After Miyazato's birdie at 15, she saved par from 8 feet at 16, then rolled in another birdie putt from 25 feet at 17 to wrap up her first victory since the Evian Masters last year in France.

Miyazato won after finishing second behind top-ranked Yani Tseng this year in Thailand and Phoenix. It was Miyazato's fifth top-10 finish in six events this year, and her first victory in Hawaii in nine tries.

After her father gave her a putting tip following a poor finish at the Kraft Nabisco three weeks ago, the 5-foot-1 star needed only 53 putts in the last two rounds.

Tseng, a three-time winner this year, overcame an ankle injury early in the final round to shoot a 74 and tie for 10th at 4 under. She has finished in the top 10 in all seven of her LPGA Tour starts this year.