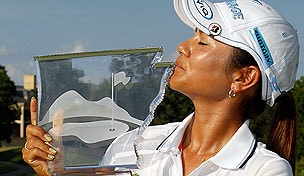 ROGERS, Ark. – Ai Miyazato shot a 6-under 65 to overcome a five-shot deficit and win the NW Arkansas Championship for her second LPGA Tour victory of the year and ninth overall.

The Japanese star made a 5-foot birdie putt on No. 18 to reach 12 under for the tournament, and her victory at Pinnacle Country Club was secured when Mika Miyazato missed a 15-foot birdie attempt on No. 18. Ai Miyazato had seven birdies and one bogey in the final round to finish a stroke ahead of Mika Miyazato and Azahara Munoz.

Ai Miyazato also won the LOTTE Championship in Hawaii in April. She's the third player on the LPGA Tour to win multiple events this season, joining top-ranked Yani Tseng, also a three-time winner, and No. 2 Stacy Lewis, and she's projected to rise from sixth to third in the world entering the U.S. Women's Open next week.

Veronica Felibert, the rookie from Venezuela who opened the day with a four-shot lead, shot a 72 to tie for fourth at 10 under.

While Felibert struggled in only her fifth LPGA tournament, the Ai Miyazato opened with a 32 on the front nine and reached 12 under after her sixth birdie of the day on the par-3 15th. Ai Miyazato fell back to 11 under after her only bogey on the day at No. 17, but she used a 3-wood to reach the front fringe of the par-5 18th in two shots.

After a chip to 5 feet, she calmly sank the downhill left-to-right putt to take a one-shot lead over Munoz, who had already finished her round.

Mika Miyazato was also at 12 under on the back nine, but a bogey on No. 16 left her at 11 under and needing a birdie on No. 18 to tie Ai Miyazato to force a playoff. Mika Miyazato hit the fairway on the final par-5 final hole but elected to lay up.

She hit her approach shot 15 feet left of the hole, but her birdie attempt just went by to the left and kept the her winless on the LPGA Tour.

Felibert started the day at 11 under after only one bogey in the first two rounds. She reached 12 under twice on the front nine, but both times she quickly gave the shots back with bogeys.

Her bogey at No. 9 led to a brief three-way tie with Mika Miyazato and Inbee Park, but Felibert bogeyed Nos. 12 and 13 to fall out of the lead for good.

The former Southern California standout entered the week ranked No. 723 in the world and had earned only $2,489 in four previous LPGA events, in which she missed three cuts. Felibert earned $93,770 for her fourth-place tie with Park, who shot a 68 on Sunday.

Lewis, the local favorite who played at the nearby University of Arkansas, finished with a 70 and tied for 19th at 4 under.