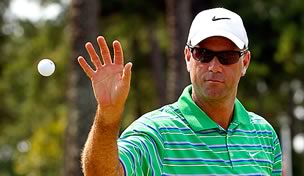 Rest assured, this week’s mandatory meeting in San Diego has the potential to be the liveliest yet.

On the agenda Tuesday at Torrey Pines is the governing bodies’ proposed rule to outlaw the anchored stroke. U.S. Golf Association executive director Mike Davis is expected to explain to players the organization’s position on anchoring.

When announcing the proposed rule in late November, Davis and R&A chief executive Peter Dawson cited a “tremendous spike” in usage and a “growing advocacy” among teaching pros and tour players. More important, though, they stressed that the ban was not simply a reaction to the fact that three of the past five major champions (Keegan Bradley, Webb Simpson and Ernie Els) have used a belly putter.

“This is fundamentally about what we think is the right thing for the game,” Davis said at the time.

More news on anchoring the putter

Rule 14-1b will be finalized in the spring, following a 90-day comment period that would allow industry insiders to address any lingering concerns. That window expires at the end of the West Coast swing in late February. If the proposed rule is passed, as expected, the ban would take effect on Jan. 1, 2016, when the next edition of the Rules of Golf is published.

The Tour, however, doesn’t have to wait that long.

Generally, the Tour has adopted the same set of rules as the sport’s governing bodies, but commissioner Tim Finchem and Co. could decide to institute the ban sooner – perhaps as early as this October, before the start of the 2013-14 wraparound season – to spare the players using anchored putters from scrutiny or potential distractions. The Policy Board is expected to vote on the issue later this season.

“I really don’t think the Tour will ever do that,” Stewart Cink said. “It wouldn’t look good for us to say, ‘You made a rule, and we’re not going to go by it.’

“It’s not unprecedented, and policy doesn’t stop us from making our own rule, but I really don’t think we will.”

Cink, it should be noted, won three titles with a conventional putter and the other three with a belly putter. “I don’t have a horse in this race,” he says.

“But when I was putting with a long putter” – for six-plus years, from the latter half of 2002 through early 2009 – “one of the reasons I switched back was that I had a hint in the back of my mind that the long putter had become a slight crutch, and I felt like I was depending on it because it was just a little bit easier to use,” he said.

“I’m not saying it’s easier to use; you still have to putt great to be effective with it. But it’s one of the reasons I switched back.”

In his fifth event after returning to the conventional putter, Cink held off Tom Watson to win the 2009 British Open at Turnberry, his first major championship and last title won.

“I had just developed a little hint of if I’m going to win a tournament with a long putter, I will have wished I was using the short putter,” Cink said.

At the World Challenge in December, Bradley, one of the best young players in the game, was heckled by a spectator because he was wielding a belly putter. Bradley shrugged off the incident, saying he hoped to use the detractors as motivation, but later told reporters there, “I feel like the USGA has really put an  ‘X’ on our back.”

That has led some to wonder if the Tour should institute its own rule and enact the ban beginning in October.

“I think they should really follow the USGA’s lead,” said Geoff Ogilvy, a member of the 16-member Player Advisory Council. “I don’t think the Tour can do any wrong if you follow what the USGA does. I think if they start going away from the USGA is when you’re going to get in a tough spot.”

Ogilvy said the last time a players’ meeting had this much anticipation was in 2008, when drug testing was introduced to the sport.

“But when they communicated with the players and said why they’re doing this right now, it was the right thing to do,” he said. “Without that communication, we were revved up about it.”

This meeting, he said, could take on a similarly educational tone.

“Perhaps (Davis’) spiel will neutralize the feelings that are in the room,” Ogilvy said. “To hear it from the USGA’s mouth and where they are coming from and why they propose the rule the way it is, perhaps that will change everyone’s perspective.”

And if not, one thing remains certain: No players will doze off this year.