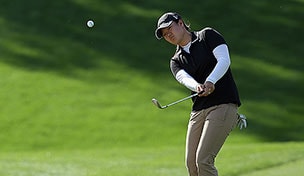 She’s just 14, an eighth-grader at First Avenue Middle School in Arcadia, Calif., and the youngest player in the field, but she shot to the top of the leaderboard right out of the gate.

“I peaked at the leaderboard after the second hole,” Yin said.

Yin said she was excited seeing her name atop the leaderboard but knew she shouldn’t make too much of it.

“I pretended I didn’t look at it,” Yin said.

The round didn’t end as well as it started. Yin double bogeyed the 17th and hit her tee shot in the water at the 18th on her way to bogey. She closed with a 1-over-par 73.

She earned a spot in the Kraft Nabisco by winning a special junior qualifier.