Arnie: Winnie and Kit, the ladies in Palmer's life 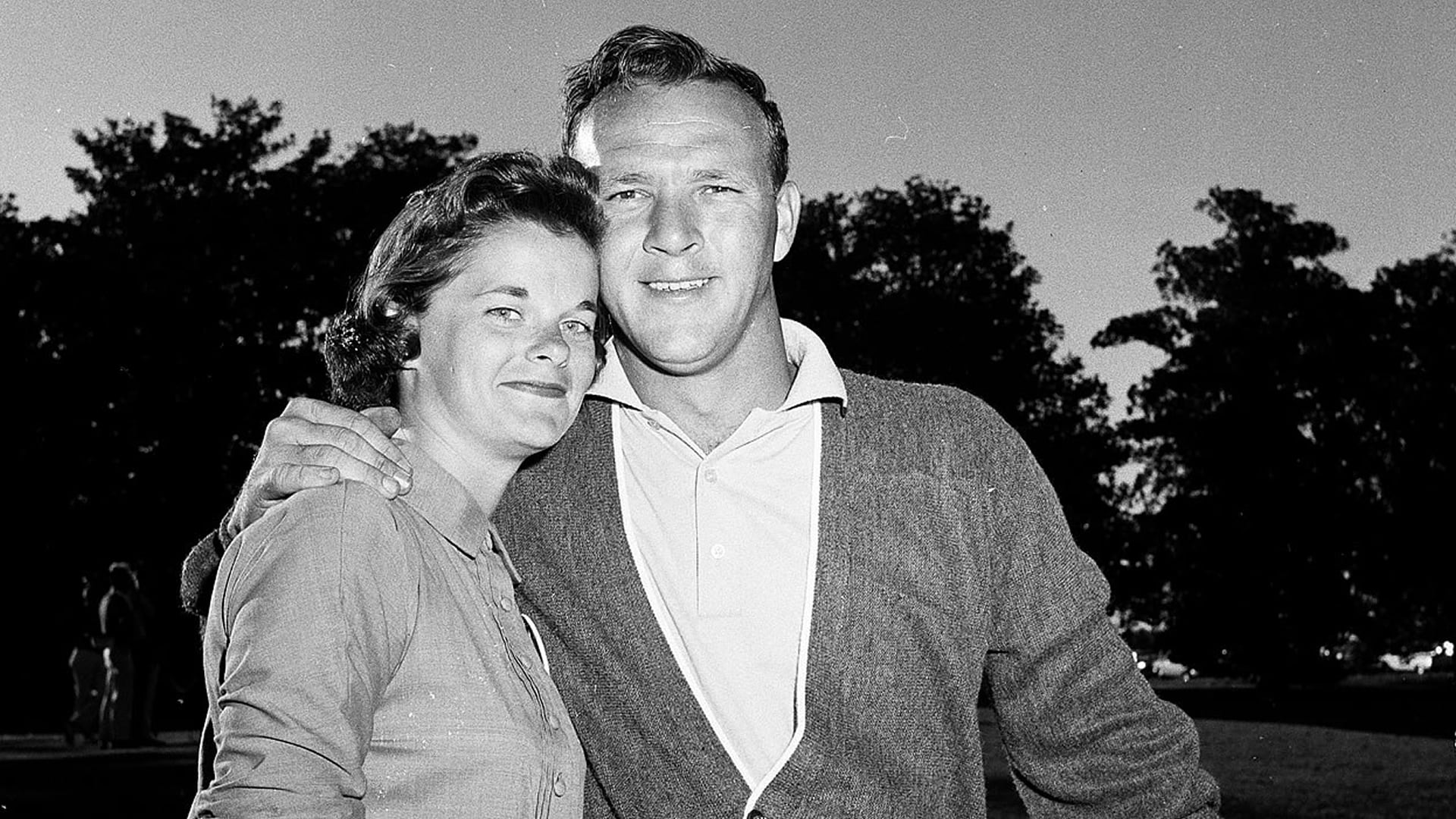 The trajectory of Arnold Palmer’s life was forever changed in August 1954 when he won the U.S. Amateur. Little did he know, however, an even bigger surprise awaited him later that year.

After the U.S. Am, Palmer was invited to the Waite Memorial, an amateur tournament with festivities beginning Labor Day weekend in Shawnee-on-the-Delaware, Pa.

“As I was coming back into the inn (from playing a practice round), I saw a couple of pretty girls coming down the stairway that led to the main lobby,” Palmer wrote in his autobiography, "A Golfer's Life." "It was the quieter, prettier, dark-haired one that caught my eye. She had smoky good looks, and her demeanor had a clear sheen of class.”

Palmer was introduced to the two girls and shook hands with Winifred (Winnie) Walzer.

“If you don’t have anything to do, why don’t you come out and watch the golf,” Palmer said.

“Perhaps I will,” she responded with a smile.

Winnie was 19, studying interior design at Brown University’s affiliated design school at Pembroke College. The two connected at dinner the next evening.

Palmer recalled the event in his autobiography: “Winnie, I began to learn that night, was unlike any girl I’d ever met, not just pretty and comfortable in almost any situation, but also smart, well traveled (she’d just come home from a big European trip), engagingly independent minded, even something of a would-be rebel.”

The two were instantly smitten with one another, and Palmer walked away that week with two trophies – he won the tournament, and Winnie accepted his marriage proposal.

Arnold and Winnie originally planned on a spring wedding and a honeymoon in England after the 1955 Walker Cup (in which Palmer was set to play in St. Andrews, Scotland), but the two grew impatient and plans changed. Winnie wasn’t old enough to wed without her parents' permission, and her father never liked the idea of Winnie marrying a future struggling golf pro, who he doubted could properly provide for his daughter.

With help from Arnold’s sister Lois Jean, or "Cheech" as she was known, who was living with her husband, Ron, in Alexandria, Va., all the arrangements for an elopement were taken care of – the church, the minister and the reception – and Arnold and Winnie got married five days before Christmas in 1954.

“That was the beginning of a 45-year journey of learning,” Palmer wrote in "A Golfer's Life," “through the usual marital ups and downs, through Tour triumphs and personal disappointments she’ll never speak of, all magnified by my evolving success … I was just beginning to discover what I’d really found.”

Winnie traveled with Arnold when he first set out on Tour, but by Christmas 1955, Winnie was far along with the couple’s first child. They knew traveling and living out of suitcases would be difficult with a family, so they built a home in Palmer's birth town of Latrobe, Pa. Peggy was born in February 1956, and the couple had another daughter, Amy, two years later. Winnie stayed home to care for the children and help Arnold with finances and other business matters.

"Winnie has always tried to stay out of the limelight,” Palmer's longtime assistant, Doc Giffin, said. “Over the years, she's declined 10 times as many interviews as she's granted to people who wanted to talk to Mrs. Arnold Palmer. But she's always been there for Arnold when he needed her. She was the mainstay in raising two wonderful daughters. She kept the house and did all the cooking herself. In the early years, she handled a lot of Arnold's business arrangements. … Personally, professionally, in every aspect of his life, Winnie has always been there for Arnold."

“She was really the glue for all of our family,” Arnold and Winnie’s daughter Amy said. “She was just the most accommodating person ever. She had deep, meaningful relationships with everyone, and I think she knew what my father needed and was willing to take a back seat anytime she needed to make sure to put everybody else out front, when in fact she was the one that was so often the person behind the scene and I think she did amazing things juggling and raising a family and trying to be there for my father.”

“Just losing her, I mean she was so much to so many of us,” Cheech said. “She’s my best friend, although I wasn’t (in Latrobe) very much; I lived in Washington. But they came through Washington all the time, we got to see each other a lot. She and I went on a lot of trips together, she was so much a part of us. I think my mother and dad loved her as much as they loved the rest of us. She just fit in perfectly.”

“I don’t think there’s ever been anything like Mrs. Palmer and there never will. She was a special lady,” Britt said.

“It was just a breath of fresh air,” Hollis Cavner, director of the Champions Tour's 3M Championship, said. “What he’d went through with Winnie, and to find Kit, the love he’s got with her now, it really helped him tremendously. … She’s been super for him and a lot of fun to be around. She was absolutely the perfect thing for Arnold to get him back to being the Arnold we know and love.”

Palmer wasn’t the only one happy to welcome Kit into his life.

“I think they were so totally different, my mother and Kit,” Amy (Palmer) Saunders said. “I think the companionship that Kit loves to watch sports, she loves to be at home and I think that’s really what my dad needs. I think he needed someone that enjoys the things he enjoys and I think that everybody embraced Kit in a way that I don’t think, I hope that she never felt that there was this looming presence of my mother.”

There is a looming presence of Winnie, but in a positive way.

“I don’t think it’s hard (living in Winnie’s shadow),” Kit said. "I think it’s nice to see (Winnie ever-present in Arnold’s life at Bay Hill), where she lived and the influence she had here.”

Of all the fortunes Palmer has acquired over the years, where he really struck it rich was in having found two women to share his life who shared him with the world. Both Winnie and Kit understood that as many perks as they would receive from being Mrs. Arnold Palmer, their relationship would be defined by what they gave … to Arnold and as a result, to the world.