Palmer entertains with insight on past, present and future 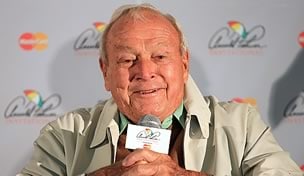 ORLANDO, Fla. – To put this in context, when Arnold Palmer won his first PGA Tour event in 1955, Vijay Singh – the oldest player in this week’s field at Bay Hill – wasn’t even born. It would be another eight years and 35 victories for Palmer before the Fijian would enter the world.

The point is, if that kind of living history isn’t enough to make you brave a morning monsoon in Central Florida to hear the King, then you can stop reading.

There are no topics that Palmer will not address and he does so with grace and a unique perspective that only comes with six decades of trial and error. On Wednesday at Bay Hill he didn’t disappoint.

From Tiger Woods’ continued quest to reach Jack Nicklaus’ record of 18 majors to Rory McIlroy’s well-documented decision to skip the Arnold Palmer Invitational, when the man from Latrobe, Pa., talks all of golf listens.

“I give (Woods) a chance to do the record,” Palmer said. “I suppose that every year it's a little more fleeting, however, and he'll have to really work hard to keep himself up and keep his mental attitude if he's going to do it.”

As for McIlroy skipping his event, Palmer offered a subdued, “I was as surprised as a lot of people.”

When it came to the game’s hot-button issue, however, there was no ambiguity in Palmer’s response. The potential ban on anchoring and the idea that the game could be entering a new era with two sets of rules – one for amateurs and the U.S. and British Opens crafted by the U.S. Golf Association and Royal & Ancient, and another created by the PGA Tour – drew a pointed response.

“I don't think that golf has a place for two sets of rules,” Palmer said. “I think one of the reasons that the game has progressed in the way that it has over the years is the fact that the amateurs and the pros all play the same game and they play under the same set of rules. I feel like that is very, very important. … It may be the key to the future success of the game of golf.”

The bifurcation of the Rules of Golf gained momentum recently when the Tour announced its opposition to the proposed ban on anchoring, although commissioner Tim Finchem has stopped well short of calling for two sets of rules.

As for the proposed ban on anchoring, Palmer was equally passionate.

“We don't need a long putter,” he said. “That's not part of the game of golf. To attach it to your body in any way is taking a little bit away from the game. … We do not need a contraption to play the game of golf.”

If Palmer was … well, king for a day, high-octane golf balls would also be on the endangered species list along with long putters. “I would like to see them slow the ball down. I think that's probably the major thing that I would like to see happen,” he said.

But even under that pretense, Palmer said he would not be in favor of a “tournament ball” for certain events like the Masters or U.S. Open. On this, unification trumps the need to save classic courses from irrelevancy.

Yet it’s not just Palmer’s ability to put the game’s current issues into historical context so much as it is his capacity to bridge the generational gap that is so compelling. He connects us to the game’s past like few can or will with the ease of a historian and the authenticity of a participant, not a spectator.

In a moment that drives golf scribes to Bay Hill each year to hear the “State of the King,” Palmer was asked the loudest roar he had ever heard in his career. After a few moments of reflection, he described the scene in HD clarity.

“It was on the 16th hole at Augusta when (announcer) Jimmy Demaret was in back of the 16th green and they were talking about the shot that I had,” Palmer recalled. “Demaret was saying – I could hear it – ‘He's got an impossible shot here, and to get it up and down will be a small miracle.’

“I'm listening to him saying all of this and then I chipped it in, and that was a loud cheer.”

For the record that shot occurred at the 1962 Masters, nearly a year before Singh was born.