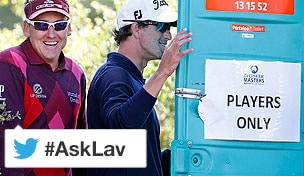 These are peculiar times in golf, not least because a pop-up meth lab was found in a porta-potty on a golf course. (Editor's note: Aforementioned porta-potty not shown here.)

If you haven’t yet seen the story, a Purcell, Okla., muni was at the center of a police investigation Tuesday after authorities found a “shake and bake” meth lab near one of the holes. (Full story here.) There is no truth to the rumors that the bunkers were actually made of bath salts.

Anyway, that ridiculous news brief almost makes the story of Daniela Holmqvist seem ordinary. The rookie on the Ladies European Tour was bitten by a black widow spider at a pre-qualifier, and not only did the 24-year-old dig a tee into her ankle and squeeze out the poisonous venom, but she also kept playing, shot 74 and didn’t visit the local hospital.

A 74 under those unusual conditions is extraordinary, really, but keep in mind it’s also 11 strokes higher than what Lydia Ko posted in Round 1 to take the early LPGA lead. Already Ko is 30th in the Rolex Rankings – ahead of Sandra Gal, ahead of Morgan Pressel, ahead of Michelle Wie. A reminder: She’s only 15 years old. Not old enough to drive. Not old enough, technically, to see an R-rated movie by herself. Barely old enough to be your babysitter.

The only golfer hotter at the moment? Brandt Snedeker, who broke through after consecutive runner-up finishes and set the tournament scoring record at Pebble Beach … only two days later, he revealed that he’s been playing through a rib injury and could miss the next month. In hindsight, how remarkable is that stretch of golf?

And, lastly, the USGA announced it would begin drug testing at this year’s amateur championships. Smart move, because if the feigned uproar is any indication, many disenchanted players likely turned to illegal substances after learning that the Publinx would be retired. Or, you know, this is simply the USGA’s reaction to the explosion of golf-course porta-potty meth labs across the country.

Yes, what a strange, intoxicating week it has been. With that, here are your questions in this week’s #AskLav mailbag:

@ryanlavnergc what would you think of an open draw for the match play, where anyone can draw anyone from round one! #AskLav

@golfchannel When is the PGA Tour going to make public penalties imposed against players? Allother major sports are transparent. #AskLav

Well, at least under the anti-doping policy the Tour is required to name the offender and suspension levied. But that’s all we get. Unlike other sports, there is no disclosure of fines, no disclosure of suspensions. Camp Ponte Vedra wants to protect the image of the sport, transparency be damned.

Where do you rank Riviera's 18th hole among the best finishing holes in all of golf? #AskLav

There is no shortage of spectacular finishing holes on the regular Tour schedule – PGA National, Pebble, Hilton Head all come to mind – but the 18th at the Riv is in my personal top 5. Unless you’ve stood on the tee, it’s impossible to comprehend how difficult that drive is on the 18th, especially for a right-hander. And the natural amphitheater surrounding the 18th green is one of the most hair-raising scenes in golf, as this euphoric fan from last year’s event demonstrates here.

@ryanlavnergc You got a partner for the USGA four-ball? I'm free. #AskLav

Just mowed the living-room carpet to 12 on the Stimpmeter. I’ll be ready for 2015.

@golfchannel #asklav#rydercup 2014. As a visitor would you prefer watching just one day and then playing some golf or attend all days?

Uh, if you’re flying all the way over to Scotland, you might as well play golf with a few buddies, no? Just make sure you’re on-site Sunday, in case there’s a reprisal for Medinah.