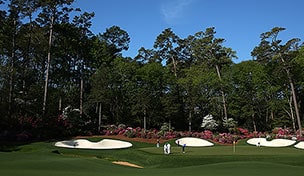 The golf course was evacuated just after play was concluded on Thursday, but there was no damage and rainfall totals were negligible. Another line of storms was expected to move through the area around 9 a.m. ET.

The added moisture will only soften a course that was already playing easier than expected. On Thursday, 32 players posted scores under par and the greens were missing that familiar zip.

“I don't get it. They're soft and they are slow,” Phil Mickelson said. “I've got to change my whole mindset and just get after these pins, because the ball’s not running like it used to and I'm giving this course way too much respect because of my past knowledge than the way I should be playing it.”

Winds are expected to increase on Friday to 10-15 mph and temperatures will remain in the mid-70s.