An away team like no other, Europe wins Solheim Cup with a family vibe 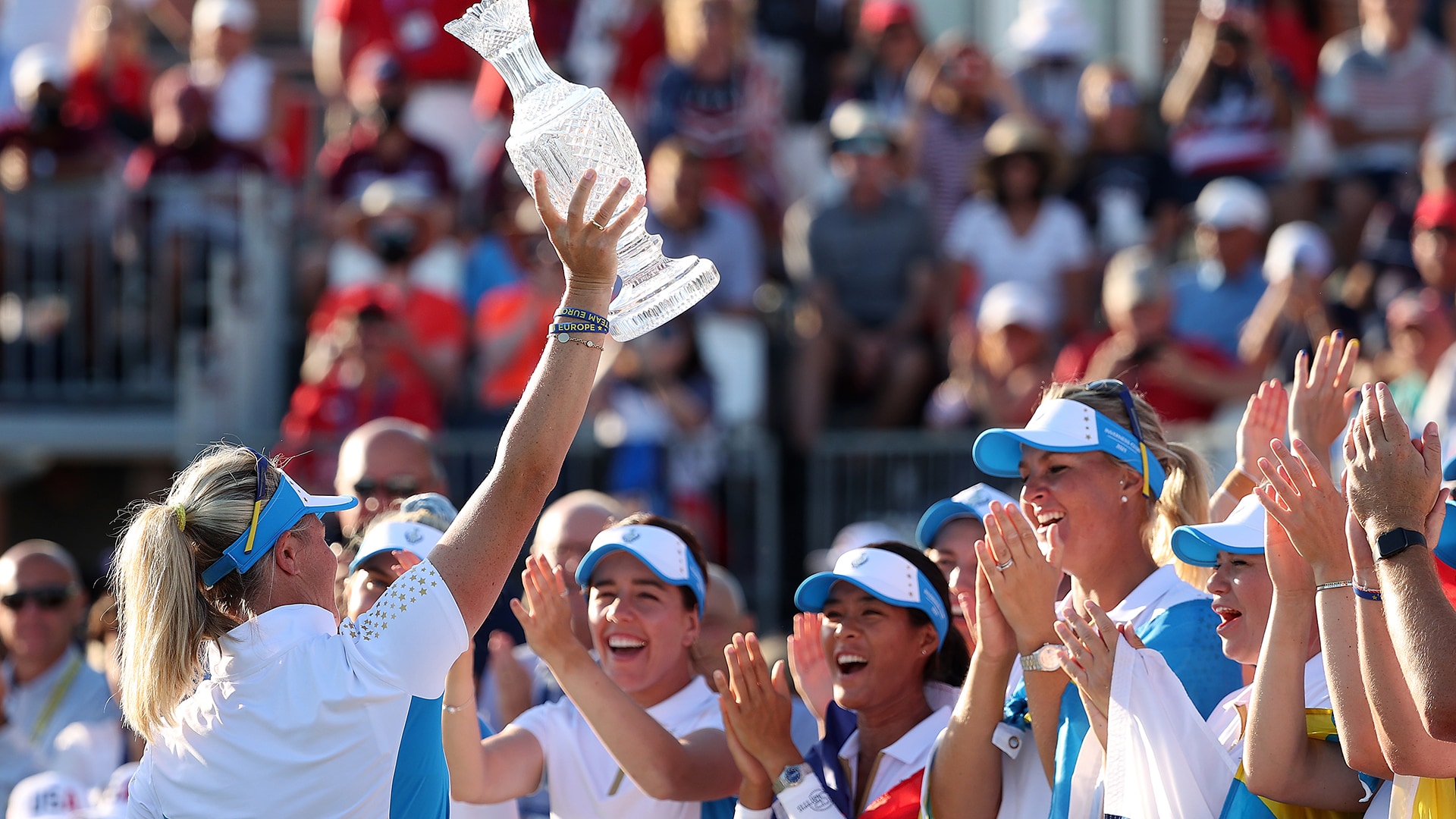 TOLEDO, Ohio – “To the putting green!”

Madelene Sagstrom, to no one in particular, issued the rallying cry and joined her European Solheim Cup teammates at the practice area, where Mel Reid sprayed champagne – the first of no fewer than five bottles popped (though, not all by Mel).

Fifteen yards away, the U.S. side huddled in a circle of players and caddies, captain Pat Hurst eliciting a few much-needed laughs as the two sides awaited the closing ceremony.

European players and caddies and supporters were having the time of their lives, singing a song that can only be enjoyed by those celebrating, in this case a repeat victory in the Solheim Cup. It's just the second time the Euros have won on American soil (2013), allowing for emphasis on the "So good! So good! So good!" part.

It wasn’t the first time the away team had broken into song. Just after 4:30 p.m. ET on Monday – a beautiful 80-degree Labor Day at Inverness Club, perfect for celebrating working by not working – the first “Ole, Ole, Ole, Ole! Ole! Ole!” cheer with gusto finally erupted.

It was led not by fans but by Anna Nordqvist, Celine Boutier and a few of their guests this week. It came as Matilda Castren rolled in a 25-footer for birdie at the par-4 15th hole to go 1 up in her match against Lizette Salas.

There’s always a match. The one to which the players who are finished flock. The one that is going to determine who wins, in this case, the Solheim Cup.

This was that match.

The Europeans led, 12 ½ - 8 ½, at the time of Castren’s birdie. But looking at the giant digital board between the 15th and 17th holes, the U.S. was comfortably up in two matches, the Euros in one, and four others were very much in doubt.

This was the match.

Less than two months ago, Castren wasn’t even eligible for the European team. She had to win a Ladies European Tour event – which she did in mid-July – to make herself an option for Captain Matthew, who rewarded Castren with one of her six picks.

Now, the 26-year-old former Florida State Seminole, by way of Finland, was among the final seven matches on the course, and the math was in favor of her point being the one that at least retained the cup for Europe.

“I’m trying to do the crazy math,” said a frazzled assistant captain Suzann Pettersen, who was bouncing around the various matches on Monday.

Two years ago, Pettersen made the putt to win the cup for Europe in Scotland. She then retired on the 18th green.

Only five of those players on the victorious ’19 team were back for Matthew. But for those who didn’t compete at Gleneagles, there was a constant reminder of what transpired.

“There's a big photo of it in our locker room and walking past it every day, I just look at it and I'm like, Wow, that's so cool and I hope that I can be there one day making that winning putt,” Castren said on Wednesday of Pettersen's indelible moment.

And, lo and behold, here we were.

And, lo and behold, here they were. With just a minor position shift, the small European contingency moved from the back of 15 green to the back of 17 green.

Castren was still 1 up. A tie on 17 would at least secure a half-point for Europe and, given the state of the other matches, get them to 13 ½, one half-point shy of retaining the cup.

That would get them to the magical number of 14, all that is needed when you are the defending champions.

Salas wasn’t going to make it easy. Qualifying for the U.S. team was her No. 1 goal this year. She was 2-0-1 this week and, with the help of Jennifer Kupcho, had dealt Castren and Nordqvist an ‘L’ in the Sunday morning foursomes.

With an amphitheater setting at the 17th, with U.S. fans covering every blade of grass around the green, Salas stuffed her approach shot to 3 feet. After Castren missed her birdie effort, the 32-year-old, five-time Solheim Cup veteran had a short but ticklish putt to tie the match.

Though this was the largest crowd in Solheim Cup history (reported by LPGA officials as 130,000 for the week) and the most partisan ever, thanks to COVID-19 restrictions preventing European travel to the U.S., it never felt like a disadvantage for the visitors.

There was only one bit of controversy as well – and it wasn't even player-initiated. That occurred on the opening day in an afternoon fourballs match including Sagstrom and world No. 1 Nelly Korda, in which a hole was awarded to the latter's team because officials believed there to be a rules breach. From then on, European players said they heard a few inappropriate things. But all Reid asked was that the egregious fans be original in their taunts.

There were roars on Monday, but nothing sustained. It was like that most of the week, save for Sunday morning when the U.S. won three of the four foursomes matches to get within a point.

It had been a slow start for the Americans. They fell behind, 3 ½ - ½, after the opening session and could never draw even.

It was 9-7 to begin the singles and it was now 13-11 – upon the conclusion of other matches – as Castren and Salas were playing the 18th hole.

Hitting first to the green, Castren pulled her approach shot into the front, left greenside bunker. Not just into the bunker but buried in the bunker.

"The lie was pretty terrible. It was plugged right under the lip. Luckily I had some room to work with. I had some green to work with. I just had to get it out and get it rolling," Castren said. "It actually came out a little better than I was expecting, and I think it had a little bit of spin on it, too, and there was a little bit of a backstop to like help it come back. That shot actually ended up better than what I was expecting."

Salas, meanwhile, had hit her approach shot 20 feet below the flag. But after she narrowly missed her putt to win the hole and halve the match, Castren now had 15 feet for par.

Fifteen feet and maybe she could be art on a wall of the 2023 team room in Spain. By now, nearly every European team member who wasn’t still playing had become a fan at 18.

Castren converted and posterized the moment.

"It was just so cool having the whole team there and just seeing those blue and yellow colors on the sidelines and people cheering," she said. "I mean, I knew that putt was important, but I didn't exactly know what the score was at that time. I just knew I had to make it." 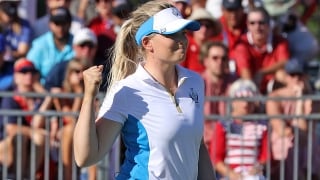 For the fourth time in six editions, Europe has won the Solheim Cup, defeating the U.S., 15-13, Monday at Inverness Club.

Retention was secure. But to paraphrase Sagstrom, Off to the 16th green!

Arm in arm, Georgia Hall, Nordqvist, Nanna Koerstz Madsen, Matthew and Leona Maguire – Ms. 4-0-1 Leona Maguire – walked up the 16th fairway to watch Emily Kristine Pedersen try to finish off Danielle Kang. The Euros were well aware that Pedersen was already assured a half-point, leading 3-up lead with three to play. It was just a matter now of determining the final margin of victory.

The 18th and ninth holes were switched this week, from what they normally play. Inverness Club officials wanted to make sure their signature hole – the one where Bob Tway made his miraculous bunker shot to beat Greg Norman in the 1986 PGA Championship – would be showcased on TV. And since matches, fewer than not, reach the 18th hole in this format, the “Freaky Friday” change was made.

This week, however, 16 of the 28 matches made it to the final hole, including the anchor match, in which Pedersen duplicated Kang’s birdie to win, 1 up, and give Europe an official 15-13 win.

Setting off the official celebration.

It wasn’t raucous. Most of the fans – U.S. fans – had left at that point. There was just a relatively small gathering around the 18th, many with no rooting interest, just hoping for an autograph or a selfie.

Aside from a couple of cheers from outside the ropes, it was just the players, the captains, the caddies and the support team, bouncing and singing the Ole! song.

The Euros belted out that one, as well, a farewell of sorts to the only European captain to twice win the Solheim Cup (and without a defeat, to boot).

"I'm so proud of this team. At the end of the day, I don't hit any golf shots. It's really up to them. They're the ones that won it. They deserve all the credit, so thank you, team," Matthew said. "You made me look good."

The tight-knit group that had been declared one of the best, if not the best European Solheim Cup team of all-time, had clearly stated its case. And they did so with little more than themselves to cheer on one another.

"Everyone stepped up. Everyone was a huge part of this team," said well-noted celebrator Reid. "This is a team win for sure, and we had to become a unit to beat such a world-class American team."

As the bottles popped and the champagne sprayed, “We are Family” would have been a better choice than “Sweet Caroline.”

But when you've just won the Solheim Cup, on another's turf, you'll sing and dance and drink to anything that's being played. 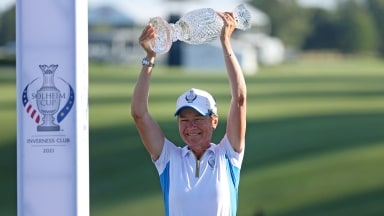