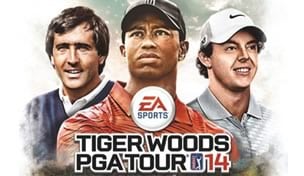 Tiger Woods will have some company when the latest version of EA Sports' golf video game hits Europe.

The 14-time major champion will be joined by Seve Ballesteros and Rory McIlroy on the cover of the European version of 'Tiger Woods PGA Tour 14' when it is released worldwide on March 29, the company announced Friday.

Known for his imaginative shot-making, Ballesteros won 91 times worldwide during his career, including five majors. He passed away in 2011 after battling brain cancer. McIlroy, currently the top-ranked player in the world, will round out the trio, sharing the cover with Woods for the third time in the franchise's history.

EA Sports also confirmed that the virtual version of McIlroy will be outfitted entirely in Nike gear, after the real-life version made headlines for switching to the equipment and apparel manufacturer earlier this month.

Woods will share the cover with seven-time major winner Arnold Palmer for the North American version of the game, while Bobby Jones and Bubba Watson will appear on the cover of a global version of 'Tiger Woods PGA Tour 14: The Masters Historic Edition.'