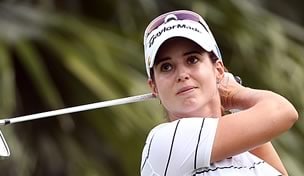 RANCHO MIRAGE, Calif. – Beatriz Recari never participated in the running of the bulls while growing up in Pamplona, Spain.

She knows what it’s like, though, to fear a dangerous threat bearing down on her.

She escaped the potential ravaging effects of an eating disorder that briefly threatened her promising golf career.

When Recari won the Kia Classic last weekend, her triumph resonated beyond her inner circle. It was another triumph of hope for the new cause she’s representing. Her victory is an inspiration for young girls who struggle with anorexia, bulimia or binge-eating disorders.

Just a little more than a week before winning her second LPGA title, Recari, 25, was introduced as an ambassador for The Alliance of Eating Disorders Awareness. Recari heads into the Kraft Nabisco Championship this week with momentum and a larger purpose.

“If I can help just one person, it will be huge,” Recari said. “I think the importance of my experience is that I’m healthy now, everything is fine, I have a good mindset, I’ve learned a lot, and I just really want to give back and share what I’ve learned.”

At the 2007 Finnair Masters on the Ladies European Tour, Recari’s health failed. She got caught up in something larger than herself. She became so weak going without eating that she struggled to walk the golf course. She was down to 100 pounds and losing her hair.

“I physically could not finish 18 holes,” Recari said. “I called my dad, and I said, `I need help, I can’t do this. I have such high goals for myself as a golfer, and I’m going against them. I need help.’ So my dad and a friend of his who is a doctor came to that tournament.”

Recari, her LET privileges secure for the following year, left the tour to address her issues and recover.

“You are in denial,” Recari said. “It’s your goal to stay on that path and keep getting thinner and thinner ... Part of this is depending on people telling you that you look great. It’s all about being skinny and being beautiful. You have to quit depending on what other people say.”

Recari’s recent victory elevates her profile and her platform. She heads to Kraft Nabisco looking to make some history in trying to become the first Spaniard to win a women’s major championship. She’s becoming an outstanding driver of the ball, a skill she believes suits her game for Mission Hills’ Dinah Shore Course.

Recari tied for 26th at last year’s Kraft Nabisco, which equals her best finish in the 12 major championships she has played.

“Last week’s win was definitely a confidence booster. I’m looking forward to Kraft because I think it fits my game with it being really important there to drive the ball straight.”

As she makes her way on tour, Recari is beginning to hear from women who face the health issues she once faced. She first went public with her struggles when she designated The Alliance for Eating Disorders Awareness as her charity recipient for winnings at the RR Donnelley LPGA Founders Cup two years ago.

“For us, at the Alliance, it means so very much to have a pro athlete come out and be willing to use her experience to help others,” said Johanna Kandel, founder and executive director of the Alliance. “So often, when it comes to eating disorders, there is still a lot of shame surrounding it. So, although many athletes have struggled, they are very hesitant to share. By her not only sharing her experience, but telling people it’s OK to talk about it and that there is help and there is hope and people do recover, it’s so significant, coming from her.”

According to the Alliance, eating disorders affect 25 million Americans alone with women making up 75 percent.

“There is tremendous courage in Beatriz stepping forward, sharing her story and supporting our cause.” Kandel said. “Eating disorders have the highest lethality rate of all psychological disorders. By coming forward, she is already getting feedback from people who are struggling, who have reached out to her.”

Kandel is a former professional dancer who founded The Alliance for Eating Disorders Awareness after recovering from a 10-year battle with anorexia, bulimia and binge-eating disorder. She has been recovered for 13 years.

“The biggest impact Beatriz will have is giving people hope and spreading the message that there is help and people do recover,” Kandel said.