The best comebacks in the Year of the Comeback 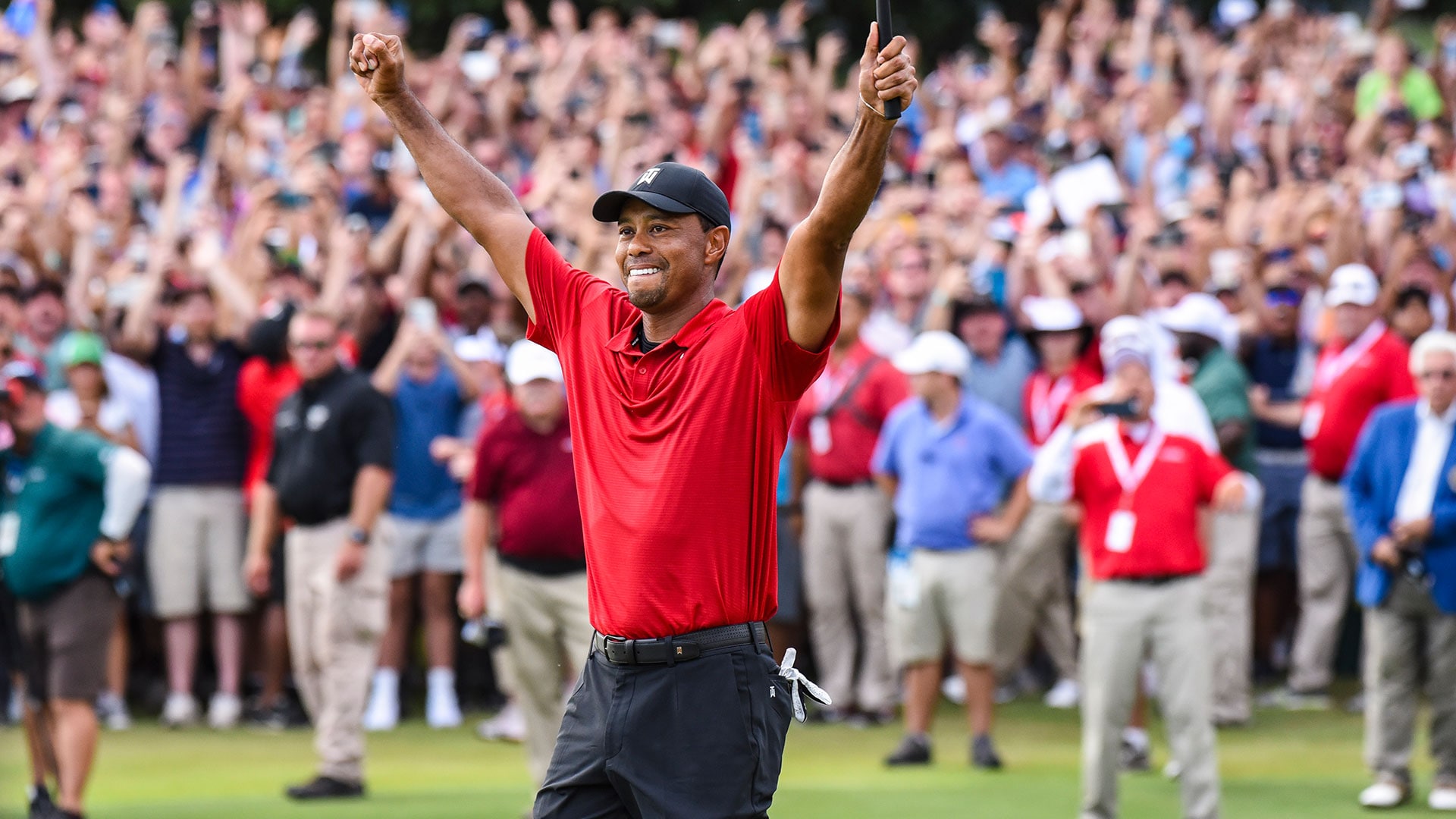 It took 46 weeks, but a clear theme has been established across the three major tours:

Some players bounced back from injury. Others overcame years of self-doubt. But all of their returns to the top of the leaderboard were great stories and brightened their prospects for even better seasons ahead.

Here, in no particular order – OK, so the first one is obvious – are the top comebacks of the year:

Even with nearly two months to reflect, it’s still amazing what Woods was able to accomplish this year, after so many (including this scribe) thought he was toast. Because this year he looked far from done – he was healthy and happy and competitive, his appeal seemingly at an all-time high. He’s climbed 643 spots in the world rankings, to No. 13, and is set to rise even higher because of his divisor. His victory at the season-ending Tour Championship was a storybook finish to his resurgent year, and now, somehow, Woods and his surgically repaired back have put two of the sport’s most hallowed records (18 and 82) back in play. Incredible, all of it.

Entering 2018, Woods had won more recently than Mickelson. Wild. But in a World Golf Championships event, at a quirky course at altitude in Mexico, after ripping off three top-6s in a row, Lefty ended nearly five years of frustration with a playoff victory over Justin Thomas, who at the time was challenging for the No. 1 ranking in the world. It was the 43rd Tour title of his highly entertaining career, and Phil immediately turned his attention to another milestone: 50 wins. Though his driving remains as erratic as ever, Mickelson, who turns 49 next June, has reinvented himself as one of the game’s best putters, the rare star whose touch on the greens has actually improved with age. Even if his WGC title proves to be one last gasp for a proud champion, hey, it was a memorable way to go out.

After 436 LPGA starts and 18 years on tour, the 40-year-old Texan finally broke through for her first major title at the Evian. It was her first victory of any kind in six years. During that dry spell she seriously considered scaling back her schedule and even looked into early retirement. Admittedly way past her prime on a tour littered with teenagers and early-20s stars, Stanford’s perseverance proved the difference, bouncing back from a late double bogey to achieve a lifelong goal. She wasn’t the only one sobbing afterward.

Anyone who watched Westwood suffer through the 2016 Ryder Cup came away with the belief that he’d never win another tournament. His putting stroke was supposedly too shaky, too unreliable to hold up under the pressure of a back-nine fight. When the Ryder Cup rolled around this year, Westwood, 45, wasn’t even considered – he happily accepted a vice captain’s role – and seemed to be preparing for life as one of the tour’s elder statesman. But there’s still some life in the old dog, and in November he fired a near-perfect 64 to win the Nedbank Challenge, one of the European Tour’s big-money, late-season Race to Dubai events, for his first title since 2014. “You’re never sure whether you’re going to be able to do it again,” an emotional Westwood said afterward. His window to capture that elusive major is closed, but the Nedbank was one of the most satisfying wins of his career.

Take that, Mike Davis! Former major champs Simpson and Bradley both found their way out of golf purgatory with redemptive seasons in 2018. Using a new, arm-anchored style, Simpson torched TPC Sawgrass’ greens with one of the most dominant performances of the season, cruising to The Players title by four shots. It was his first win, anywhere, since 2013, when the governing bodies pried away his long putter and sent him scrambling for an alternative. Bradley had been searching for his form for even longer, but he knocked off eventual world No. 1 Justin Rose in a playoff at the BMW Championship for his first title since 2012. Those victories had to feel awfully good.

This latest iteration of the Big Wiesy was pretty good, too. Through all of the swing changes and odd putting grips there’s been one constant: That she’s the most talented player on the LPGA. That was confirmed yet again in March, when she rolled in a 35-footer on the final hole to win the HSBC Women’s Championship – her first LPGA title since the 2014 U.S. Open. That major title was supposed to revive Wie’s dormant career, but injuries, as usual, halted her progress. That was the story again this year, as she’s now recovering from surgery on her right hand. Maybe one of these years she’ll be able to have an injury-free season and put it all together.

No recency bias here: Howell’s long-awaited title at Sea Island was one of the feel-good stories of the year. He’d gone 333 starts between victories. Howell hadn’t exactly fallen off – he’d still posted 53 top-10s since his 2007 win at Riviera, and now has gone 19 consecutive years with at least $1 million in earnings – but pushing through all of that scar tissue is no small feat. It’s why he was overcome with emotion on the 18th green. Once a can’t-miss kid, Howell is now a 39-year-old veteran with a deep appreciation of how difficult it is to win on the game’s grandest stage.

Willett’s breakdown occurred not long after he won the 2016 Masters, a tournament destined to be remembered more for Jordan Spieth’s epic collapse than Willett’s sterling play. And for the past two years, that might have been OK with the Englishman, as he battled a back injury so severe that he was popping six painkillers a day, just to get by. Asked earlier how dark those days were, Willett replied: “Pitch black.” But Willett was determined not to be a one-hit wonder. He hired swing coach Sean Foley, who has a history of piecing together broken players (most notably Tiger Woods), and got both his body and psyche back in a good place. It all culminated last week during the season finale in Dubai, where he beat the European Tour’s best. Once again, his arrow is pointing upward for 2019.

The mercurial left-hander never could have imagined that he’d enjoy his most successful season – at least in terms of wins – after that disastrous 2017 campaign. In one of the most head-scratching equipment moves of the past decade, Watson, who curves his shots as much as anyone on Tour, stopped playing a Titleist ball in favor of a Volvik. The results were not good, including three major missed cuts, and Watson also revealed (sort of) that he was battling a mysterious illness that caused him to lose 20 pounds and contemplate retirement. It was wife Angie who shook him out of his year-long malaise, and Watson responded with a three-win season, nearly $6 million in earnings, a 100-point rise in the world rankings and a spot on the U.S. Ryder Cup team. What Bubba, now 40, will do next is anyone’s guess, but at least he’s no longer spiraling downward.

Brooks Koepka: Um, a reminder that the PGA Tour Player of the Year missed the first 3 ½ months of the season because of what could have been a career-threatening wrist injury.

Lydia Ko: Her days of dominating the tour might already be over, at age 21, but after years of questionable decision-making and impulsive changes, Ko returned to the winner’s circle in April.

Tom Lewis: The former amateur star lost his European Tour card in 2016 and split his time this year on both the main tour and the developmental Challenge Tour circuit. He ended a seven-year winless drought at the Portugal Masters.

Bud Cauley: His 2018 was derailed after a scary car accident in which he felt lucky to still be alive. After rehabbing his various injuries during the summer, he returned to post a top-10 in Vegas.